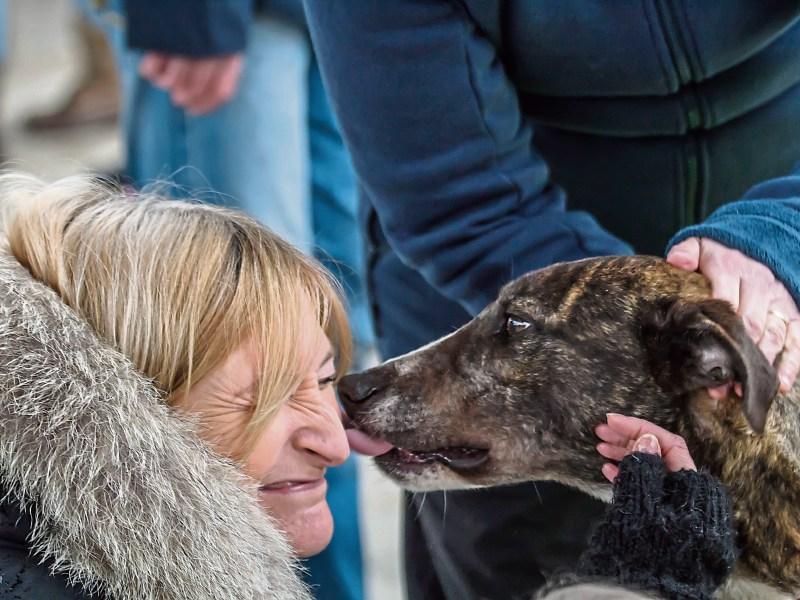 Kiss of new life: A Limerick dog says hello to their Italian owner

LIMERICK Animal Welfare has now transformed the lives of 160 mistreated and abandoned greyhounds and lurchers by rehoming them in Italy.

Since 2012, the animal charity has been working with rescue organisation Pet Leverieri. Up to 20 dogs travel at a time from Kilfinane to the Mediterranean country. While Limerick Animal Welfare (LAW) would prefer to rehome lurchers and greyhounds in Ireland there isn’t the same demand as in Italy, where they are much valued pets and life companions.

After a life of misery they are now living la dolce vita. Blue, who travelled to Italy on the March trip was thrown from a moving car said Marie O’Connor, of LAW.

“He was a skeleton, frozen and scared of humans. Blue made a full recovery and became the most loving and trusting dog. One of our volunteer dog walkers grew very attached to him and said an emotional goodbye when he left,” said Marie.

Robert was found with a broken leg and was extremely thin.

“He needed to have a plate in his leg and there were many trips to the vet with him. The dedicated staff at LAW gave Robert the best care and nursed him back to health. He recovered fully and went to Italy on the last trip,” said Marie.

Kenny will also see his circumstances come full circle in the future.

“He strayed into a farmer’s hay barn and lay down, unable to get up. The farmer was elderly so his nephew rang LAW for help. They lifted the poor creature into their car and took him to a vet where he was given immediate treatment.

“Kenny's ear was ruptured and was so full of pus and infection it took two hours to flush the wound and it then had to be stitched back together. Kenny had sores and hair loss all over his body. This poor animal was starved to the point of near death and would not have lasted much more than a couple of days had he not been rescued by the kind hearted farmer and his nephew. Kenny was unable to make this trip to Italy but he will be on the next one, to a new life,” said Marie.

The journey to Milan is a long one - 24 hour ferry trip to Cherbourg, then a 1,200km drive across France and into Italy.

“There was torrential rain for the whole of the long journey but, when they arrived the atmosphere was charged - full of excitement and eagerness from the Italian adopters waiting to greet the newest member of their family. They have been waiting months for this moment and the joy and love for these dogs is written all over their faces.

“This all the reward that is needed for the months of work and dedication to bring them together and to give these rescued greyhounds and lurchers a second chance to have a full and happy life,” said Marie.

The adoption process starts months in advance of the big day. Profiles and photographs are sent from Ireland to Italy for prospective owners. Before travelling all dogs must be issued with a pet passport, get a rabies vaccination and have a vet check.

To support LAW you can donate directly to their bank account, via pay pal, text or through their charity shops and Kilfinane sanctuary. Full details are on their website.

They also welcome volunteers to help clean, look after the animals and walk the dogs. Contact 063 91110 for more information.