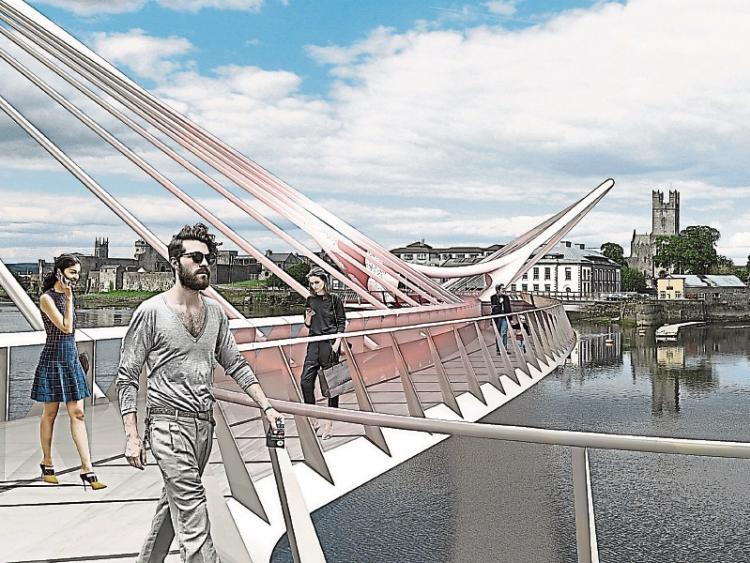 An architecht's rendering of a proposed €18m footbridge for the city

AN action group has been set up in protest at controversial proposals to build an €18m footbridge across the River Shannon.

Bosses at Limerick City and County Council are proposing to build the bridge, which may be situated behind the Potato Market.

But the plans have proven to be unpopular, with three former mayors among those speaking out against the project.

Now, the Footbridge Folly Action Group has been formed which will lobby in opposition to the bridge, which the council is planning to submit an application for shortly.

The action group is made up of a number of organisations which use the river including An Taisce, the two rowing clubs, the Curragower Boat Club, and the St Mary’s Men’s Shed Project. Also involved is the Thomond Archaeological Society.

Group spokesperson Brian Leddin said: “There is widespread disquiet about this project. There is no getting away from that. We feel an organised campaign to tackle it is needed. People are adamant there should be a concerted effort to remove the project.”

A public meeting in opposition to the proposal is likely to be held in the city before the end of April, he added.

In a statement, the group has listed nine reasons as to why the bridge should not be built.

These include the claim that it will impact on the flow of the river, that it is a “highly sensitive” archeological site, plus the fact the project was not listed in any development plan.

The group says there is “no rationale” to support claims the bridge will lead to increased tourism, and there is also scepticism about where the money will come from, with €10m from an anonymous donor.

They add “it is not desirable a public project is funded anonymously”.

In a statement, a spokesperson for the ‘Footbridge Folly’ group adds: “We believe the way this project is being advanced is totally unacceptable. It seems an executive decision has been made by the Economic Forum and handed down to the council, and that the democratically elected councillors, who represent the stakeholders and the citizens of Limerick have not had a day in the decision. There is a very notable lack of transparency surrounding the project with very little information in the public domain.”

Council chief executive Conn Murray last month defended the project, saying: “It is in my view an exciting opportunity for Limerick and potentially iconic.

“It has proven so far in other international locations, and I think Limerick at least deserves that discussion, debate and opportunity.” He said he believes the design “could be done in a sensitive manner to fit in with he landscape, and to connect the old and the new. This is an opportunity and we’d like to explore that opportunity”.