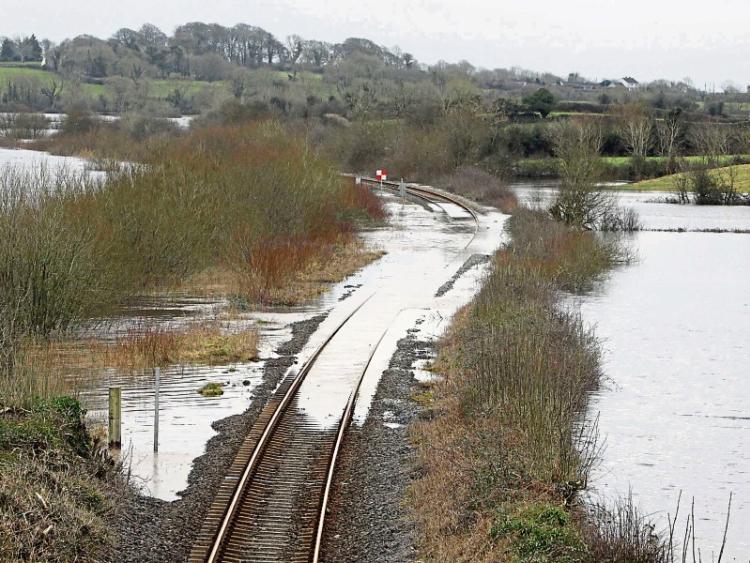 The flooded line at Ballycar. Irish Rail hopes to re-open the Limerick to Ennis line next month

THE railway line between Limerick and Ennis is expected to open next month after extensive flooding on the line, Iarnród Éireann has said.

The line, which suffered flooding at Ballycar Lough in December and has been closed since, is currently being served by buses. Irish Rail said in a statement this Thursday afternoon that it expected the line to re-open in mid-May.

The extensive flooding in the area saw waters rise to a peak of 1.4m over the rail line in March, largely due to the heavy rainfall in December and January. While the intense rainfall ceased in January, inflows caused flood levels at Ballycar to peak in early March, the company said.

This has now fallen to 0.9 metres above the line, with 1.75 miles of track remaining flooded, and Iarnród Éireann forecast that – unless further extreme weather arises – the line will reopen in the middle of May.  This will allow both Limerick to Ennis local services to resume, and the full operation of Limerick to Galway services.

A video, with commentary by Valerie Scott, Assistant Regional Manager West for Iarnród Éireann Infrastructure, shows peak flood levels, and details the reasons the area is prone to flooding.

A number of schemes have been proposed to alleviate the flooding in future, including raising the line over a significant distance, but funding is currently unavailable for these works.

Iarnród Éireann has previously raised the track level by 60 centimetres at Ballycar in 2003 to mitigate against the effects of flooding.