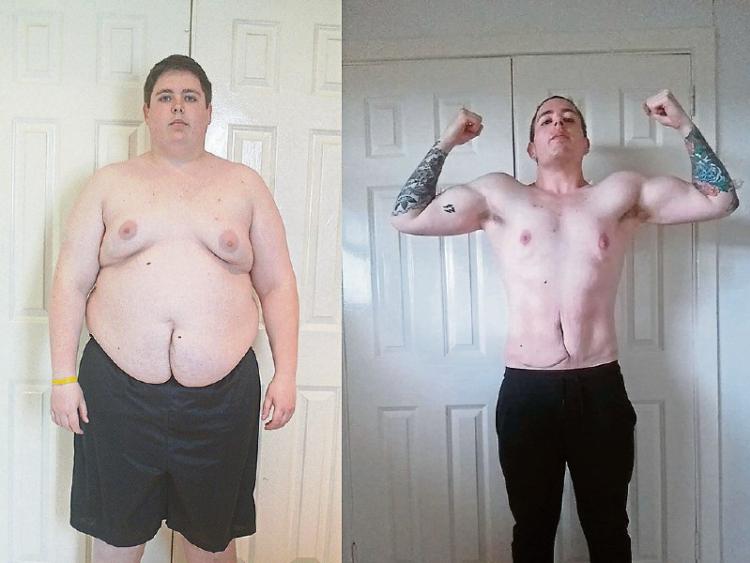 Who is the biggest loser now ? Gerard Burke, 28, before and after he lost a massive 12 stone in weight

Gerard Burke, 28, from Garryowen, who featured in the programme in 2012, when he was morbidly obese, will be doing the half marathon again on Sunday, May 1, and is encouraging others to walk or run in the biggest race outside of Dublin.

Since undergoing the transformation which completely changed his life, Gerard said that no matter the distance of the race or the location, he “cannot wait” to take part in his fifth Great Limerick Run.

“It's the one race I wouldn't miss for the whole world. It’s such a great weekend in Limerick. There's always a great buzz on the day; everyone is smiling and it’s just such a happy event,” he told the Leader.

Such is his determination that a week before the Limerick run he will also be running a race in Madrid, and in addition has signed up to take part in Ironman 70.3 in Dublin this year, which includes running, cycling and swimming an overall distance of 70.3 miles.

“2016 is a new year and a new set of challenges for me. My race calendar is full for this year but the one event that means the most is Barringtons Great Limerick Run. Are you thinking about signing up? Stop thinking and do it. Whether it is the six-mile, half marathon or full marathon, make it a goal of yours. On the day, when you cross the finish line, you will feel like you have conquered the world. That’s how I felt when I finished my very first running event,” he said.

Just four years ago, Gerard weighed 328lbs or 23 stone six pounds, and said he’s now “far from being that negative guy, sitting on his couch watching his life pass by.

“For most of my life I was a negative person. One little quote was massively affecting my life, ‘I can’t do it’.

“I ate all the wrong foods, and exercise was not even a thought in my head. As years went by, my clock was ticking. Finally realising the negative effects my lifestyle was having on my life, I said enough was enough. It was time to get moving.

“I slowly started to fall in love with a certain something, running. But for me this was hard because I was morbidly obese. That’s when interval training came into play. Gradually, I saw myself picking up my pace and before I knew it I was running in my very first five-mile event.

“I wore my race number with pride that day and even though I came second last, under the blood, sweat and tears I was smiling and so proud of myself.

“A lot of people ask me – ‘How do you lose weight?’ Before I even talk about food or exercise, I basically tell them, you have got to want it. It’s the mental game that you have to conquer first.

“Before I knew it, I had signed up for my first marathon, which I completed in 4 hours 7 minutes. Whoever thought four years ago, I would ever complete a marathon? I certainly didn’t, but I did.

“How should you train? Treat every day as a step towards your goal. Start out slow and slowly build up your pace every day. Doesn’t matter how fast you run or if you can run at all. What matters is you decided to challenge yourself. Don’t like training on your own? Why not coax a friend to challenge themselves. Walk, run or crawl it’s a day not to be missed.

“There is plenty of time to start training. You won’t want to look back. I’m quite excited for race day to put all my hard work into practice.”

The organisers of the seventh annual run are now calling on volunteers to help make this year's event “another amazing success”. Putting out the call for volunteers, race director John Cleary said that they play a crucial and winning role for the event to operate smoothly.

“The Barringtons Hospital Great Limerick Run could not go ahead without the amazing support of the local community in Limerick on the weekend of the event,” said Mr Cleary.

“We are looking to get volunteers for a number of sectors of the event. Volunteers are required for the day of the race as well as at our Expo event on Friday, April 29 and Saturday, April 30 in University of Limerick Arena,” he said.

Volunteer roles will range from manning water stations along the route to distribution of medals and refreshments at the race end.

At the Expo volunteers roles include handing out T-shirts and goody bags to participants.

Every volunteer will receive a certificate from the Great Limerick Run acknowledging their participation in the event as well as a volunteer T-shirt and food and refreshments on the day. Health and safety training will also be provided prior to race day.