CONSTRUCTION: PLAYGROUND DEVELOPMENT HALTED AS SITE IS EXCAVATED AND INVESTIGATED 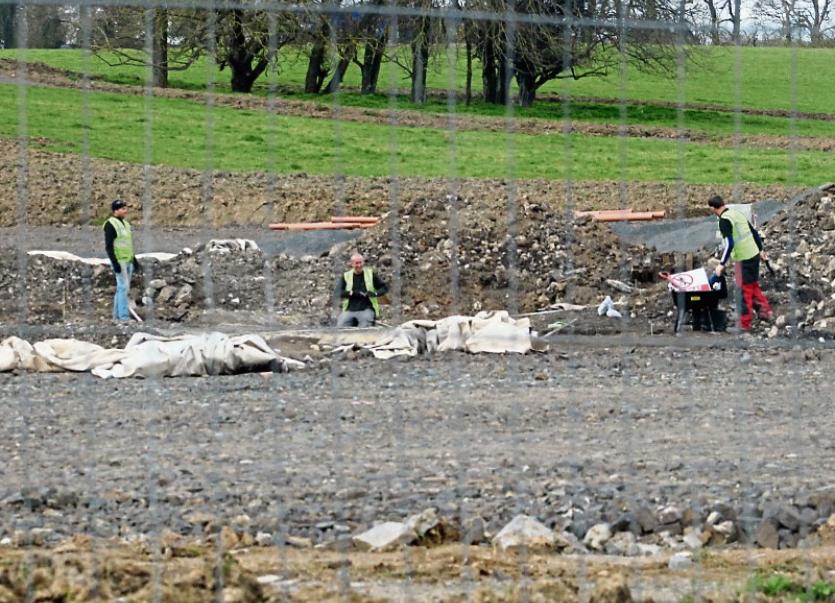 ‘No delay’: the council has said that the park plans for Mungret will not be delayed by the discovery of a fulacht fiadh on the grounds

LIMERICK City and County Council has said “it does not expect” a delay to the completion of works at Mungret Park, owing to the discovery of a Bronze Age site on the grounds.

Work preparing the site for a new park and playground has stopped in recent days after the find of a fulacht fiadh, or ancient open air cooking place.

Archaeologists are currently investigating the find, which is one of a number found in the area around the historic Mungret Monastery. A spokesperson for the council confirmed that the site was being investigated.

“It is currently being excavated and recorded under licence by archaeologists,” said the spokesperson.

“Work has proceeded on other areas of the site while the fulacht fia is being excavated and as such, we don't expect a delay to the overall completion of the works.”

Mungret Heritage noted the find on its Facebook page.

”Archaeologists are currently investigating a fulacht fiadh found near Mungret College during work by Limerick City & County Council on the new neighbourhood park,” it said.

“A fulacht fiadh is an ancient open air cooking place where meat is cooked in a trough filled with water already heated with stones from a fire.

“It brings to seven the number found in recent years in the vicinity of nearby Mungret Monastery. Typically a Bronze Age activity, it shows that the area was popular long before the monks arrived in the sixth century.”

The park plans form the first stage of a major redevelopment of the area, following the council’s purchase of Mungret College and the surrounding lands in 2014. The facility, to be built on lands in front of the college building, includes a playground, exercise equipment and cycle tracks.

The next stage of the plan will see a number of schools constructed on the lands, both for primary and secondary level.

New campuses for Limerick Educate Together and Gaelscoil Raithin are set to be built close together near the top of Moore’s Road on the grounds. That road is currently in the process of being upgraded to serve the site.

Acting finance minister Michael Noonan referred to the development plans for the 200 acre site in 2014 as “effectively having our own Phoenix Park at the edge of the city to the west”.