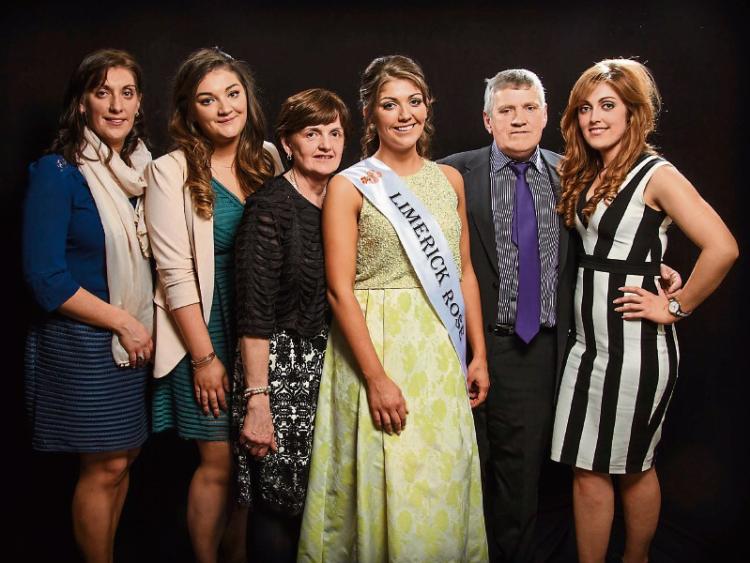 THERE were celebrations in West Limerick this week, as Carrigkerry native Marie Hennessy brought home the Limerick Rose sash after Saturday night’s selection.

Because the regional qualifiers in Portlaoise have been eliminated this year, the 25-year-old secondary school teacher will be heading straight to the Rose of Tralee festival, in a bid to make it to the televised finals. And though she did not show off the optional party piece on the night, she used the on-stage interview as a platform to endorse her hometown.

“The starting point for me was Rooskagh and where it was! And I was telling people that you can see five counties from Rooskagh, and it is one of the highest points in Limerick. The view here is just fabulous. You wouldn’t believe it until you see it.”

“Delighted” locals have said that this is one of the biggest achievements that the small Rooskagh community, located in the Ardagh-Carrigkerry parish, has had in recent years.

Her father John said that the “proud” family have been receiving congratulatory calls and messages from relatives, friends and members of the community since Saturday night’s success.

“It is a great honour for her to represent Limerick and to represent our home parish. I thought the event was fantastic. All the girls and everyone there were fantastic. And the whole family is excited and delighted,” he said.

And while photos of the new Rose were being shared on all social media platforms on Saturday night, family friend Kathleen Hayes said that the community first caught wind of the positive news at Mass on Easter Sunday morning.

“We were all so thrilled for Marie. She is a very clever girl and she comes from a very hard-working family, and I think she will do very well at the Rose of Tralee.

“She is a well-educated girl, and I think she will be well able to articulate herself at the festival. And she is an Irish teacher with great passion for Irish, so hopefully she will be able to say cúpla focal to Daithí Ó Sé!”

Fr Timothy Curtin, who is the new parish priest, also congratulated the new Limerick Rose, who represented Muscular Dystrophy Ireland during the selection.

The new Limerick Rose was presented with the prestigious sash on Saturday night, after 23 hopefuls from all corners of the county vied for a place in the annual Rose of Tralee festival.

Teacher Marie will be the first Rose in almost 10 years to represent Limerick in the Dome this August, owing to a change in selection procedures.

The 25-year-old said that she was “speechless” when her name was called out at the end of the evening, at the Bunratty Castle Hotel.

“It has always been something that I have wanted to do,” she told the Limerick Leader. “It’s like the cliché – every little girl wants to be a Rose, and we always loved meeting the Rose when they visited the town or was passing through. Some of us would get their autographs.

“I never, for a second, expected that I would be selected. I was so proud to push my own boundaries and get out of my own comfort zone and to represent Rooskagh. But the girls were so fabulous, they were so well-spoken, and they have all done so much, so the thought of me being selected actually never crossed my mind.”

Marie didn’t do a party piece on the night, she relished the idea of promoting her small West Limerick locality, during her one-to-one interview with MC Ollie Turner.

She said that she also took the opportunity to discuss her chosen charity, Muscular Dystrophy Ireland (MDI).

“Muscular dystrophy affects everyone in different ways. Some people might end up in a wheelchair at a very early stage, or it might not come to that until late into their thirties. It weakens the muscles, whether it’s the use of your hands, your feet, swallowing, etc. And MDI provide respite and support services for the parents and family members,” she explained.

Marie graduated from University of Limerick with an Arts degree in English and Irish, and later went on to receive her higher diploma.

She now teaches English and Irish at Desmond College, and told the Leader she is a Gaeilge enthusiast and is “passionate” about promoting the Irish language.

“I am very active in promoting the language and the preservation of the language, and getting people back to speaking it, including younger people speaking it.

“I have spent every summer, for the past 10 years, in Coláiste Bhréanainn, in Ballybunion. That is a huge part of my life. I wouldn’t know my summers without it,” she enthused.

Marie, who was wearing a green floral skirt and a sequin top, admitted that she was “absolutely shaking” before she introduced herself to the panel of judges and the packed audience.

Because there are no regional qualifying rounds in Portlaoise this year, Marie will join 67 other Roses at the Tralee festival, in a bid to represent Limerick in the televised final.

“Whatever happens over the next few months, it is going to be the time of my life.”

Limerick Rose Centre co-ordinator, Denis Griffin said the event at Bunratty Castle Hotel was “an absolutely super success” and that there was a “fantastic representation from the 23 young ladies”. He added that Ms Hennessy, who is a teacher at Desmond College, was “an outstanding lady and a true Limerick woman”.