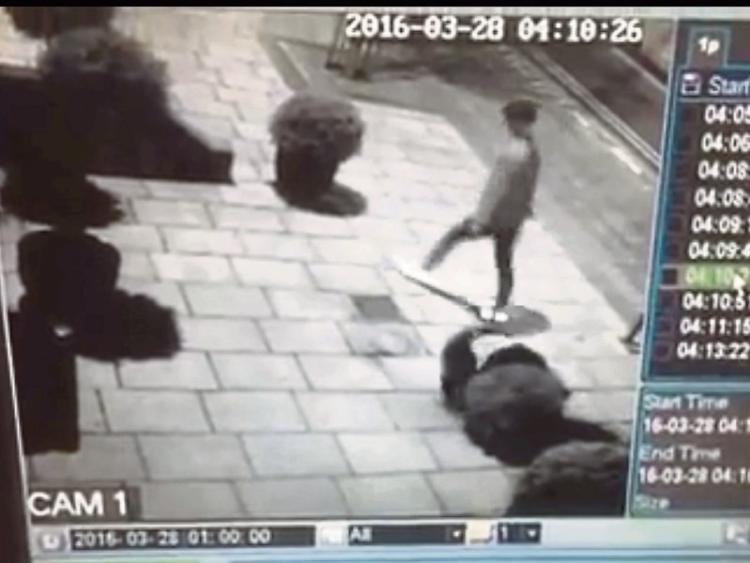 CCTV footage of a ‘ridiculous’ case of vandalism outside Limerick restaurant the Cornstore is attracting a huge response online.

The Thomas Street premises released the security footage, taken early on Easter Monday morning – 4.10am to be exact – late on Wednesday night.

It shows a man needlessly kicking and pulling over two flowerpots and smashing them before stumbling off. The whole incident lasts barely ten seconds.

Anyone recognise this guy who smashed up our pots...maybe the Easter bunny forgot about him! #criminal #hooligan pic.twitter.com/wYZYRjDEoW

Mags O’Connor, sales and marketing manager for the Cornstore Group, told the Limerick Leader that she uploaded the footage to Instagram, Twitter and Facebook – where the video has already had in excess of 21,000 views – simply because “we wanted to highlight that this is an absolutely ridiculous way to conduct yourself”.

The restaurant has not made a complaint to Gardai and has no plans to do so. The tweet accompanying the video asks the public: “Anyone recognise this guy who smashed up our pots...maybe the Easter bunny forgot about him! #criminal #hooligan”.

“Look, you know, he didn't break in, he just broke a few pots, so we just said for a bit of banter, a bit of craic, we would ask the public does anybody recognise him,” said Mags, confirming that no official complaint had been made.

“A few people have come back with direct messaging saying they might know who it is. The pots were, I think, about €100 each, so look, we wouldn't be bothered pushing charges or anything.

“I put it on Instagram, Twitter and Facebook and it has gone mental! I had to turn off my phone. The amount of comments, retweets and people reacting… We took a decision to put it up because we just felt that, like all the businesses in Limerick, it is expensive to keep our premises looking sharp, so you invest in these flowers and pots and then this guy comes along and breaks them. Maybe he had a bad night!

“It is a pity that somebody like that, a young guy who seemed to be very well dressed, that he would just do something stupid like that - there probably was a lot of drink or something involved - but just grow up,” added Ms O’Connor.

The video has attracted a series of comments, including:

@cornstore_limk I'd have other choice words to describe this individual. But I'm a lady.

@cornstore_limk quite apart from his behaviour that haircut is criminal!