Fr Seamus Devitt admiring the religious icon as it arrived at the grounds of Mount St Alphonsus. Below, Fr Seamus Enright meets the Pope in Rome

A REPLICA of the icon of Our Lady of Perpetual Help, which was recently blessed by Pope Francis in Rome, will make its way through the streets of Limerick during a special procession next week.

On Monday, April 4, the treasured icon will commence its tour in Limerick, and will visit 26 cathedrals across the country.

Fr Seamus Enright, of the Redemptorist order, South Circular Road met with the 79-year-old Pope from Argentina last Wednesday in Rome, before a replica of the icon returned to Limerick for the six-week festival in honour of Our Lady. 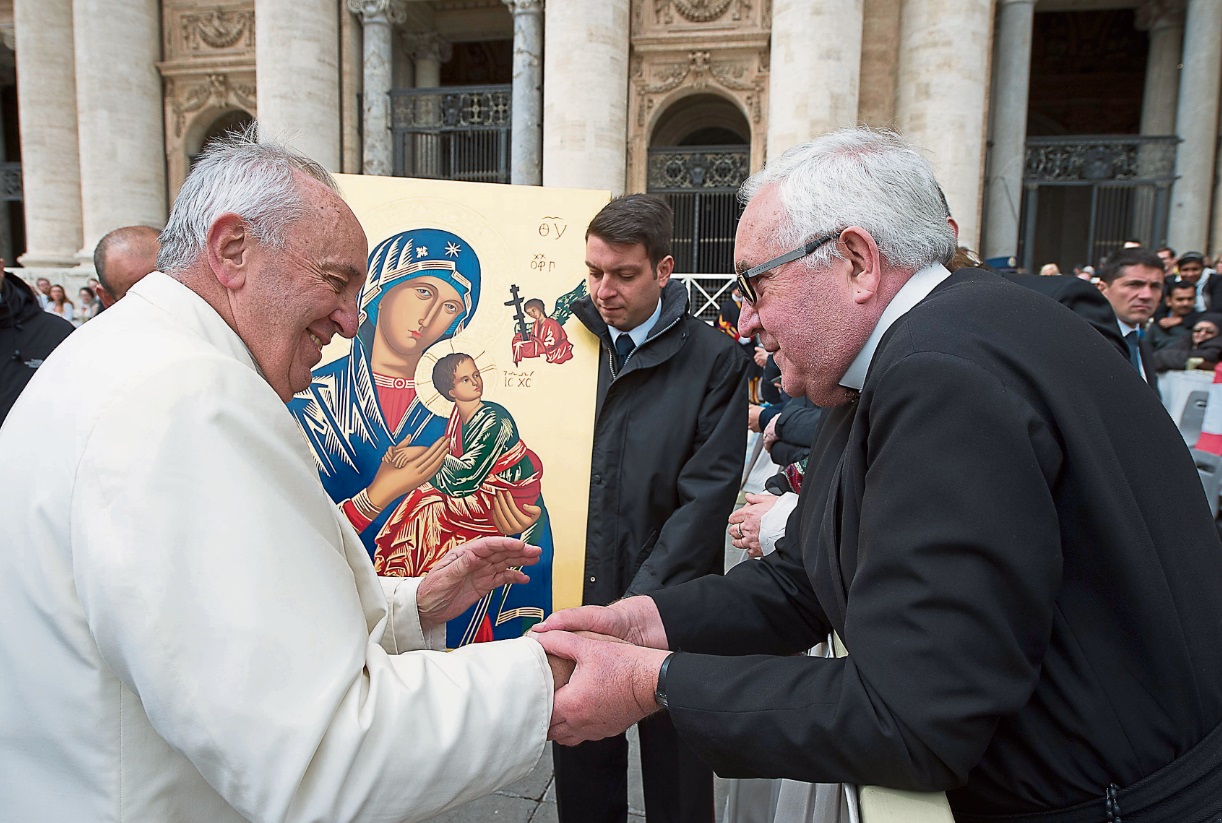 This year, the Redemptorists, worldwide, celebrate 150 years of devotion to Our Lady of Perpetual Help, and the Redemptorists in Limerick have erected a new shrine on the grounds of Mount St Alphonsus, as part of these celebrations.

The pilgrim icon was brought to Mount St Alphonsus during the 7.15pm Mass on Easter Sunday, and is being brought to various centres in Limerick this week.

On Monday, the icon was brought to Our Lady of Lourdes, followed by a visit to Corpus Christi community in Moyross, and is being brought to Milford Care Centre, Adapt House and the Polish community at St Michael’s Church, on Wednesday.

On Thursday, the Augustinian Church will be blessed with the presence of the icon, followed by a visit to Monaleen on Friday.

Before the official festive celebration on Monday April 4 at 6pm, the pilgrim icon will be brought to the Bedford Row Project.

It will be carried in a procession from the Redemptorists to St John’s Cathedral on April 4 and from there will be taken on pilgrimage to the 26 Catholic Cathedrals in Ireland, until it reaches its final resting place in Maynooth.

Fr Enright and the Metropolitan Mayor of Limerick, Cllr Jerry O’Dea, have also unveiled a billboard campaign in the city, which will also be used nationwide, under the banner ‘Follow the Icon’ to raise awareness of the importance of this event.

Pope Pius IX presented the ancient Icon of Our Lady of Perpetual Help to the Redemptorists for veneration on their church in Rome in 1865.

The Pope gave the Redemptorists a mandate: they were to promote devotion to Our Lady of Perpetual Help throughout the world.

The first copy of the Icon to arrive in Ireland has been venerated in Limerick since December 1867.

“The arrival of the Icon was greeted with great festivities. The people of Limerick took Our Lady of Perpetual Help into their hearts and homes from the very beginning.

“A beautiful shrine was built in 1868 and 1869, mostly with donations from the men of the Holy Family Confraternity,” said Fr Enright.

A notable development happened in 1959 when the women of Limerick donated their jewellery, mostly wedding and engagement rings, to make crowns for the images of Jesus and Mary.

Fr Enright said that while he couldn’t put a monetary value on these items, they are “priceless” because of the generosity of the people at the time and the history that is now associated with them.