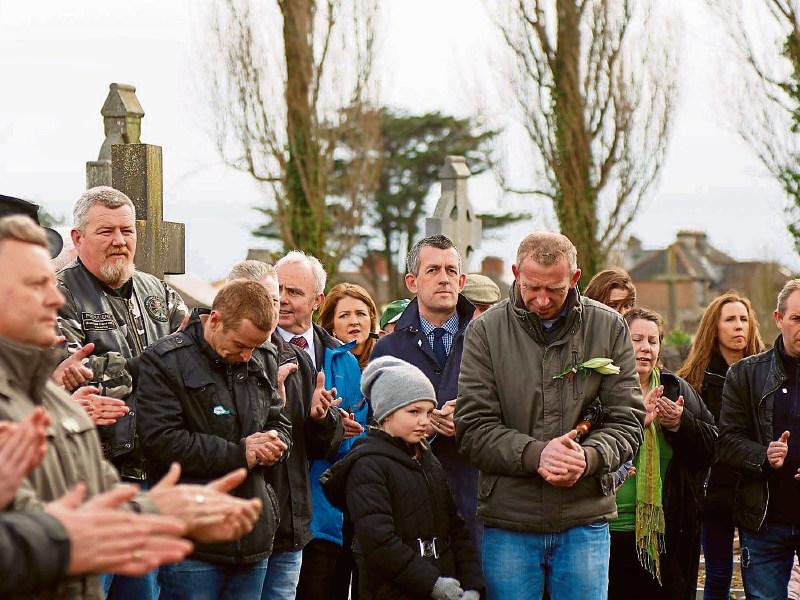 MEMBERS of the city Sinn Fein party commemorated the 1916 Rising with a special ceremony at the Republican plot at Mount St Lawrence cemetery in Limerick, on Easter Sunday.

Deputy Quinlivan opened his speech, mentioning the names of the local Rising leaders, who died during the rebellion, including Edward “Ned” Daly and Con Colbert.

“For 100 years republicans have come together to remember our patriots. We do not come to mourn, but to remember and honour. To remember their sacrifice, their heroism and their inspiration. We have lost great leaders, comrades, family members and friends.

“They are the inspiration that drives myself and this generation of republicans forward to unite our nation and build a true republic as envisaged in the proclamation. 100 years ago when the British executed the leaders of the Rising they were cheered on by the establishment and media in Dublin.”

He said at the ceremony that there is more support for Sinn Féin “than any other time in our history.

“The promise of the Republic is in all our hands. The proclamation, a revolutionary document of its time, remains the mission statement for modern day Irish Republicanism.

“This new Irish establishment set aside the proclamation. For over 90 years they have presided over partition and inequality. The rights of citizens [are] secondary to the needs of elites. In the North a state formed out of discrimination, repression and exclusion could not reflect the principles of the Proclamation.”

During his speech, he spoke of topical issues in Ireland, such as housing policy and healthcare.

“The Proclamation makes clear that the republic guarantees the religious and civil liberties, equal rights and equal opportunities of all its citizens. We oppose racism, homophobia, sectarianism and any form of inequality and discrimination. We must also recognise the differences fostered by an alien government remain with us,” he stated.

He also criticised the current government, and that his party will not “prop up a Fine Gael or Fianna Fáil-led government.

“Unlike the Labour party we will stand by our election pledges. We will not support a government of the parties which created and sustained the crisis. Their policies are the problem. These parties are not the solution,” he added.

At the end of the ceremony, he said: “Together we will build the only fitting tribute to our patriots — a true Republic.”