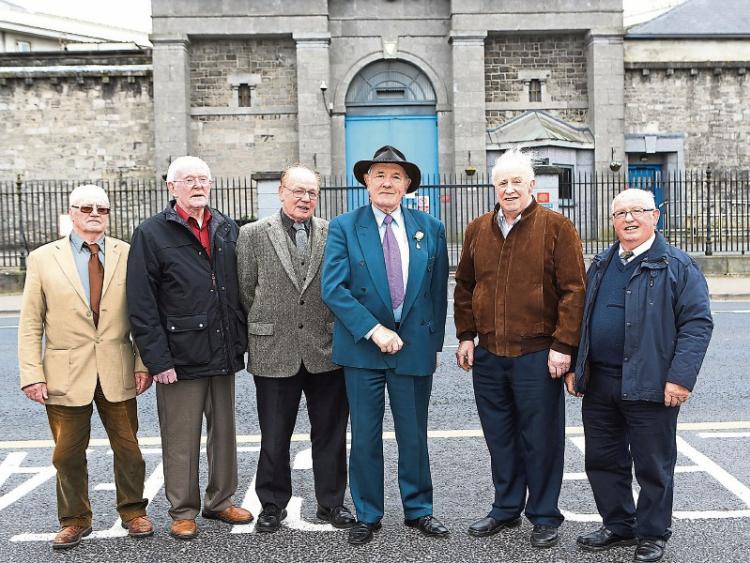 Richard Behal (with hat) escaped from Limerick prison in February 1966, and is with Walter O’Dunphy, Tom O’Sullivan, Phil O’Donoghue, Marcus Fogarty, and Buddy Kelly, a relation of Ned Kelly

THE former IRA member who escaped Limerick Prison in 1966 has said that people should commemorate the Easter 1916 Rising “with pride that our fathers and their fathers fought for Ireland’s freedom”.

Richard Behal, 78, of Killarney, visited the city last weekend with his former comrades to commemorate the anniversary of their own rising, when he and a group of Republicans plotted an escape from prison, 50 years ago.

He said that the Limerick Republicans were amongst the “strongest of supporters” that he ever received through the years.

Mr Behal, involved in the Republican movement since 1957, was jailed after his attack on the British navy vessel HMS Brave Borderer, in Waterford in 1965. When tensions were brewing over the ship’s presence in Waterford, he requested firearms from the chief of staff of the IRA. Though there was an embargo on militant action in the south, they were authorised weapons for this operation.

“He originally authorised to give me a bazooka, and I just said to him, ‘Are you out of your mind?’ I asked for something that would penetrate, or put holes in the ship, so that they could see that we were serious. Our full intent was not to take life or injure any Irish people. So, we got a Boyes anti-tank rifle, which fires an armour-piercing bullet.”

The ship was “severely damaged” after three rounds of ammunition. He was charged and convicted of assaulting a garda, though he said they did not touch a garda. This prompted a retrial, but the rebel was to become a State fugitive before that was to take place.

When he arrived in prison, Marcus Fogarty – a fellow IRA member – had only one week left in prison and was devising a plan to get Richard out.

On the night of the prison break, the governor’s daughter was celebrating her 21st birthday party in the prison residence. He said that this “startled” the men who were waiting outside for Behal, as the prison had its lights on, and that there was a large number of cars outside.

Because the prison shut its doors to the public after 8pm, they thought that Behal, then 27, had been captured in the act. He was able to exit through his window, after cutting the iron bars with small hack-saw blades.

“Luckily, one of the guys said, ‘If the boys are taking their chance inside, we will take our chance too.’ And it’s good thing they did. So if they weren’t there, I had brought my own spare sheets that I had been using to make my own rope, and then I used a cut-off prison bar as a counter-weight so I could fling it over the wall. But I threw stones over the wall, and that was the signal, and the escape was successful, and within 10 seconds we were burning the car out of Limerick, and I spent a couple of weeks in a hide-out in Tipperary. The British were very insulted, so the Government went nuts and searched everywhere. And for weeks, anyone driving out of Limerick was stopped, and houses were raided.”

Richard fled to mainland Europe for a few months, and was made a political refugee by the United Nations during this time.

During his visit to Limerick, he was joined by fellow prisoner Walter O’Dunphy, 75, a relative of Edward Kelly, deceased, who served time with Richard, and other former IRA members who aided the famous escape.

Richard is a member of the National 1916 Commemoration Committee, and will read out the Declaration of Independence at Arbour Hill at the Republic parade, on Easter Monday.