Pope Francis blessed a replica of an icon of Our Lady of Perpetual Help at the Vatican. It will be brought through the streets of Limerick in a major procession on April 4. Looking on is Fr Enright

POPE Francis blessed a replica of an icon of Our Lady of Perpetual Help at the Vatican this week, which will be brought through the streets of Limerick in a major procession on Monday, April 4.

Fr Seamus Enright, of the Redemptorist order on the South Circular Road in the city, met with the 79 year-old Pope from Buenos Aires this Wednesday in Rome, before a replica of the icon returns to Limerick for a six-week religious festival in honour of Our Lady.

It will be carried in a procession from the Redemptorists to St John’s Cathedral on April 4 and from there will be taken on pilgrimage to the 26 Catholic Cathedrals in Ireland, until it reaches its final resting place in Maynooth.

Fr Enright and the Metropolitan Mayor of Limerick, Cllr Jerry O’Dea, have also unveiled a billboard campaign in the city, which will also be used nationwide, under the banner ‘Follow the Icon’ to raise awareness of the importance of this event.

Pope Pius IX presented the ancient Icon of Our Lady of Perpetual Help to the Redemptorists for veneration on their church in Rome in 1865. 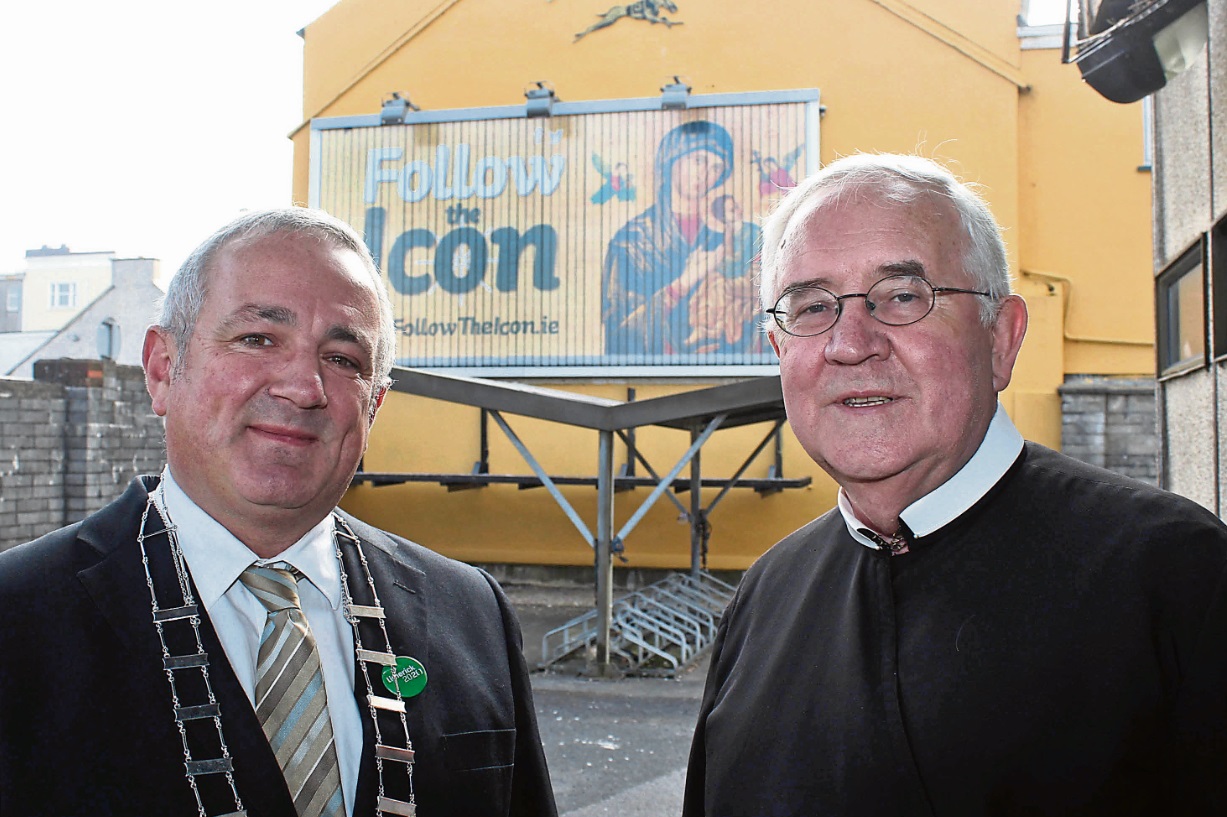 The Pope gave the Redemptorists a mandate: they were to promote devotion to Our Lady of Perpetual Help throughout the world.

The first copy of the Icon to arrive in Ireland has been venerated in Limerick since December 1867.

“The arrival of the Icon was greeted with great festivities. The people of Limerick took Our Lady of Perpetual Help into their hearts and homes from the very beginning.

“A beautiful shrine was built in 1868 and 1869, mostly with donations from the men of the Holy Family Confraternity,” said Fr Enright.

The shrine was opened for prayer on the Feast of the Assumption, 1869 and soon became the spiritual heart of Limerick. A notable development happened in 1959 when the women of Limerick donated their jewellery, mostly wedding and engagement rings, to make crowns for the images of Jesus and Mary.

Fr Enright said that while he couldn’t put a monetary value on these items, they are “priceless” because of the generosity of the people at the time and the history now associated with them.

Devotion to Our Lady of Perpetual Help has been a feature of life in Mount St Alphonsus since December 1867 but the form of the devotion has changed. An annual novena has been celebrated for many years and the weekly novena devotions were introduced in the early 1940s.

In 1973, Fr Vincent Kavanagh launched the Solemn Novena. This emphasised the celebratory and festive nature of the novena and gave a special place to the countless prayers written and left at Our Lady’s Shrine. The Solemn Novena, renamed Limerick’s Novena in 2015, continues to attract about 10,000 people each day.

The very unusual statue of Our Lady of Perpetual Help was carved by Seamus Murphy, a famous Cork-born sculptor, for the Redemptorists in 1959 and has now found a new and permanent home in Mount St Alphonsus.

The Papal Nuncio, archbishop Charles J.Brown, will dedicate the shrine on April 4 at 6pm as part of the opening celebrations of the Jubilee celebrations in Limerick.

The statue of Our Lady of Perpetual Help joins two other pieces of religious art in the grounds of Mount St Alphonsus – the recently-restored Crucifix and a statue of St Patrick.

They hope to have the statue of St Patrick restored, funds permitting, for the centenary of his execution on May 4.

Visits of the Pilgrim Icon of Our Lady of Perpetual Help will be as follows: