JP speaks of a great love for Limerick at civic reception 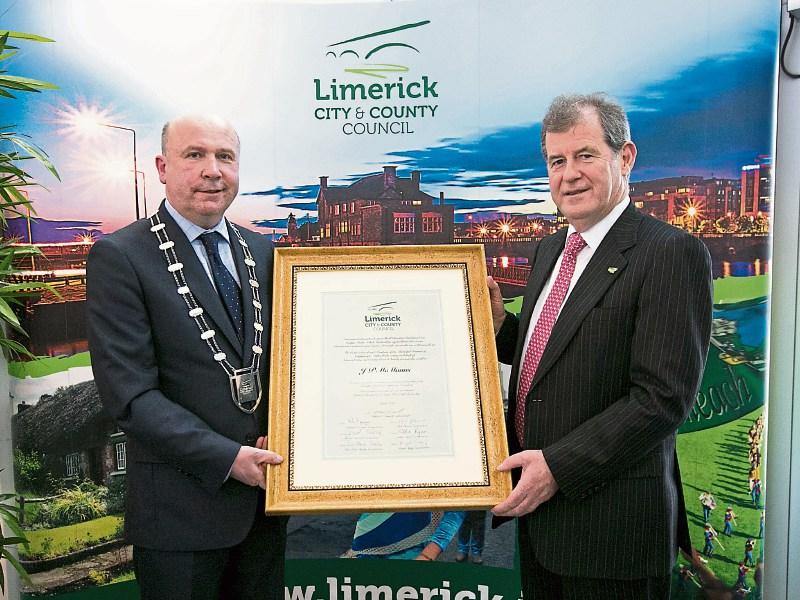 Cllr Bill O'Donnell presents a scroll to JP McManus at the civic reception in recognition of his contribution to the Cappamore-Kilmallock district. Below, the council members with JP

“LIFE fell very kindly on me,” noted philanthropist JP McManus this week when he was honoured with a civic reception in Kilmallock in recognition of his contribution to the local community.

Hosted by councillors of the municipal district of Cappamore/Kilmallock this Tuesday the event was held at Áras Mainchín Seoige where the council chamber was named the JP McManus meeting room in honour of the well-known businessperson, racehorse owner and philanthropist. 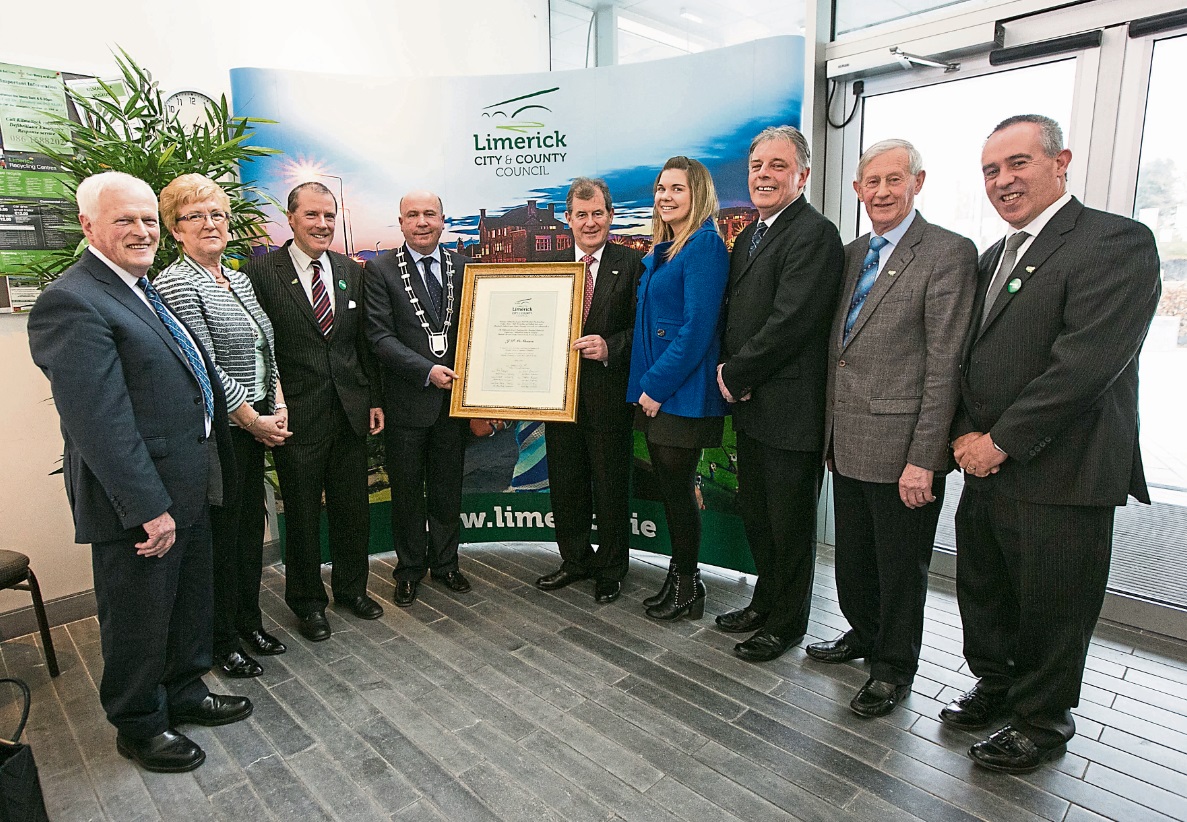 “I remember Bob Torrance, he was a well-known golf coach, and when he received an accolade up in Scotland he said: “I’m not very good at making public speeches and I don’t think this is a great day to start practicing,” smiled Mr McManus when he was invited to say a few words by Cllr Bill O'Donnell, cathaoirleach of the municipal district, who originally proposed the civic reception.

Mr McManus said he felt “a bit embarrassed being here” because, he pointed out, “I’m here because I’m lucky in that I’m in a position sometimes to do things that other people would love to be able to do but they don’t have the opportunities or the resources.”

Mr McManus, a native of Dublin who also lived in Ballygar in Galway for a couple of years, said he was “glad” his parents chose to move to Limerick - “a wonderful place to live”.

“I don’t remember my time in Dublin but I must say that I’m glad my parents chose to live in Limerick. If you have an idea, people listen. If it’s a good idea, they’ll run with it and if it’s a bad idea, they will still run with it. They are very committed.”

The avid Limerick GAA supporter, and sponsor, said that it is his wish that Limerick would bring home the Liam McCarthy Cup in September.

“They have the desire and they have the will but, for some reason, it’s not happening,” he said of the senior hurling team.

“Maybe with all our support and encouragement we will take the lead from Na Piarsaigh and maybe in September bring home the McCarthy Cup.

“Thanks very much for this lovely honour. I feel there are many people more deserving than I am but you have given it to me. Thank you,” he concluded to a round of applause and a standing ovation.

Addressing the attendees, Cllr Bill O’Donnell said that “Limerick and the surrounding region has benefited greatly under the JP McManus Fund with millions of euro being distributed to help organisations involved in health care, education and sport.”

“The presence of JP's Martinstown Stud has also been a welcome addition to the Kilmallock area, both from an economic and from a community perspective.

“By investing so much in this county, JP stands out as a true business and community leader," stated Cllr O'Donnell.

Speaking on behalf of council staff, Ger O'Connor, senior executive engineer said, “We are a proud sporting county and this sense of pride is very much shared by JP.

“His sponsorship of Limerick GAA teams through the Sporting Limerick brand has helped provide so many Limerick people with great days out through sport, whether it is the GAA or horseracing,” said Mr O'Connor.

The civic reception – which also saw contributions from all the sitting councillors in the local area – concluded with JP McManus being presented with a scroll of honour before he joined Cllr O'Donnell in officially unveiling a plaque marking the dedication of the council chamber in his name.