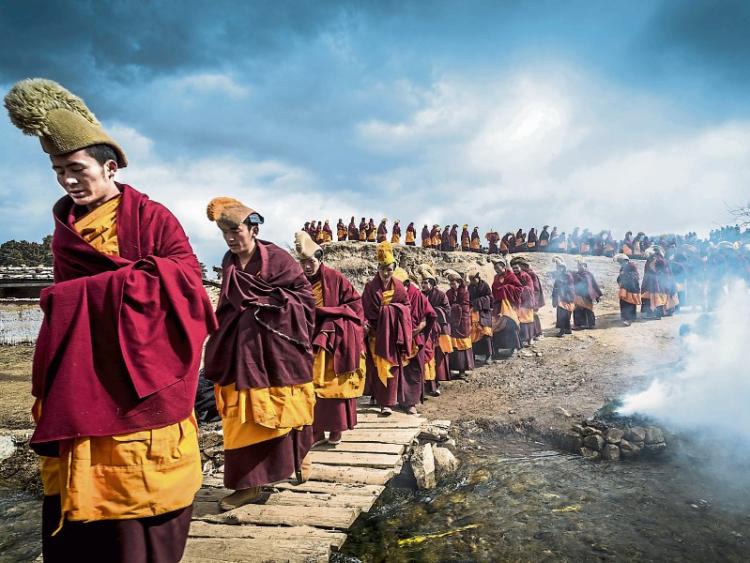 A LIMERICK photographer has won the single best image taken by an Irish photographer in the world’s biggest photography competition, the 2016 Sony World Photography Awards.

Christopher Roche’s winning image, entitled Monlam, Taktsang Lhamo and taken in Tibet, was chosen as the single best photograph taken by an Irish photographer entered into any of the awards’ ten open categories.

Roche, a filmmaker and photographer born in Canada who is currently based between London and county Limerick, has won a Sony ILCE-7M2K.

In addition, the winning image will be part of the 2016 Sony World Photography Awards Exhibition at Somerset House, London, running from April 22 to May 8. It will also be published in the annual Sony World Photography Awards book.  “I am delighted to win the Ireland National Award,” Christopher said. “Last year I was second, so persistence pays off and it looks like I’m heading in the right direction. “It is wonderful to receive recognition and it makes the memory of standing in the freezing cold of a Tibetan winter, sometimes at altitude, now seem well worth it.

“Photographing different faith traditions across the world, I try to tell stories rather than create pretty images – after all, I come from a nation of storytellers. I’m grateful that there’s an audience for it.”

He explained that the great prayer festival of Monlam takes place in Eastern Tibet during the heart of winter. “Tens of thousands of pilgrims join the monks in celebrating the event. Here the monks of Taktsang Lhamo are performing the ritual known as the ‘Turning of the Buddha’ where a statue of the Maitreya Buddha is carried around the four corners of the village. This ceremony is to ensure that the earthly realm will be ready for his arrival.”

Christopher told the Leader that while he grew up in Canada, Nigeria and Wales and has lived throughout the world, “the one constant in my life has been our family home near Murroe. I still spend as much time as I can there, editing my photographs and walking along Clare Glens, Glenstal, Keeper Hill and Silvermines, and of course along the Shannon - where the light is as beautiful as anywhere in the world.”

The runner up positions for the Ireland National Award were given to Jason McGroarty, in second place, and Norma Gleeson in third. The National Awards programme honours and rewards the best single image taken by a local photographer and runs in 60 countries across the world and is open to photographers of all abilities.