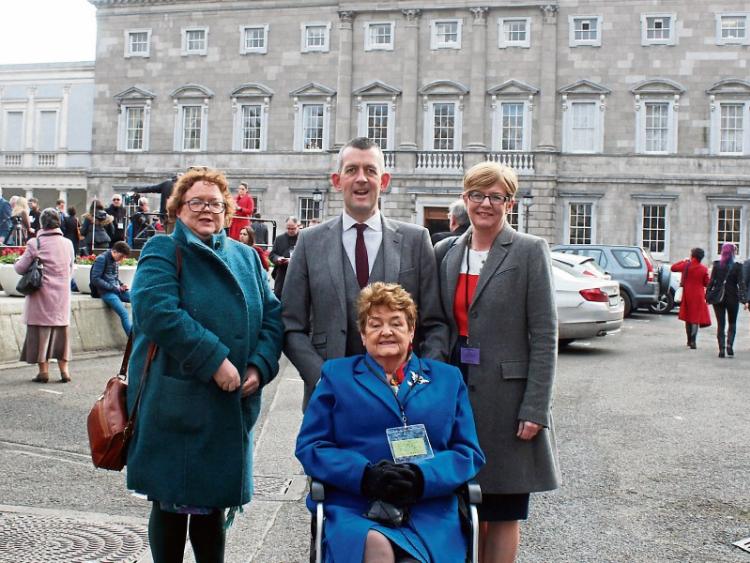 “A LOT of the populism we have seen in politics in the past will not be a feature of the new parliament.”

That was the prediction of Fianna Fail polltopper Niall Collins at the gates of Leinster House as he arrived for his third term as a TD.

The beginning of the 32nd Dail term was a far cry from the first days in the past when, more often than not, a single party knew the public had given then a mandate to govern – most recently Fine Gael’s blue tide of 2011, which saw all but 20 Fianna Fail TDs lose their seats.

A subdued atmosphere outside Leinster House was broken only momentarily by the Healy-Rae brothers, both elected in Kerry, staging an impromptu, car-top concert in Kildare Street.

But talk up to and after that point was dominated by the formation of a new government, and the certainty that no Taoiseach was going to be appointed after the maiden sitting.

There were no busloads of supporters backing Limerick’s two newest TDs – Sinn Fein’s Maurice Quinlivan opted to travel with only a small group, including his proud mother Marie, wife Sue and sister Eimear, while Fine Gael’s Tom Neville was joined on the plinth by his father Dan.

For Fianna Fail, there was a quiet satisfaction that the party is back in business.

Grinning like a Cheshire cat on the plinth, city polltopper Willie O’Dea said: “This time five years ago, the question on everybody’s lips was whether Fianna Fail would survive as a political force.

“Our members were downcast and downbeat about it. It was a bit of a culture shock these past five years to be sitting in a small room well able to accommodate out 19 or 20 TDs. But we are now back to being the second biggest party in the Dail, just barely behind Fine Gael.”

Both he and Mr Collins acknowledged a need for change, with the county TD rejecting the “narrative” of a grand coalition, saying: “To put two parties together to have a massive majority and allow everyone else who has been elected to Dail Eireann off the hook isn’t going to be the way it is going to be.”

Tom Neville, who took the second seat in the county, says he wants to use his first term in the Dail to continue the work of his father Dan – to whom he refers by first name – in highlighting the problem of suicide.

“It is a very important issue, it is something which needs to be continued. I know Dan has done a lot of work on it.

“It needs to continue to be politicised, spoken about and driven on in mainstream politics.

“I’d hate to see the work Dan has done fall back from the political agenda,” he said.

Standing proudly beside his son, Dan Neville – who retired from frontline politics at this election –  insisted of his successor: “He knows what he has to do.”

“It is not new to him. He knows how difficult and time-consuming some small, but very important issue belonging to someone can be. He knows how rewarding it can be, but also how frustrating it is when something you deeply believe in is not responded to,” Dan said.

Another proud parent was Marie Quinlivan, who admitted she thought the day Limerick City would return a Sinn Fein TD would never come.

“I must be the proudest mother in Ireland right now,” she beamed, “that my son, after 93 years, has been elected as a Sinn Fein TD for Limerick City”.

Mr Quinlivan was among the first of the new TDs to arrive at Dail Eireann on the dot of nine. He said there is a “whole raft” of issues his party of 23 deputies is looking to deal with.

Indeed, he had hoped to make his maiden Dail speech last week, as part of a Sinn Fein motion to oppose the house’s adjournement. But this did not come to pass.

One of the most enduring images of the start of the last Dail in 2011 was then first-time TD Patrick O’Donovan being hoisted shoulder-high by an army of supporters outside Dail Eireann in a mirror image of his election at the UL Arena.

This time it was different, with only Mr O’Donovan’s wife Eileen and their 16-month-old son John – named after his late father – present.

He said he fully expects Fine Gael to be part of the next government: “The onus is on us to act responsibly. Independents and others are acting irresponsibly at the moment. They are neglecting their role as members of the Oireachtas”.