They Dreamed and they Died: New exhibition opens in Limerick 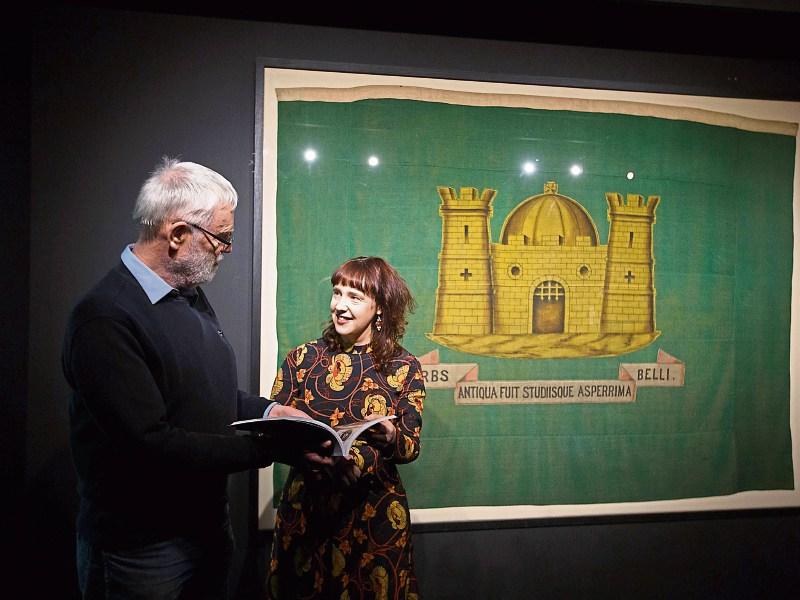 Jacqui Hayes, Limerick City Museum and Archives, discusses the They Dreamed and are Dead publication with Brian Hodkinson

A TREASURE trove of artefacts and historical gems, depicting a life of peace and struggle in 1916, were officially launched on the monumental Proclamation Day, on Tuesday night in Limerick.

Welcomed by a crowd of history buffs of all ages, members of the Defence Forces and those eager to learn more about the Easter Rising, the exhibition — entitled They Dreamed and are Dead — was launched by organisers, council officials and special guests.

Amongst the visitors was John Colivet — grandson of former Limerick City MP and TD, Michael Colivet — who spoke fondly of his family roots and the exhibit.

A publication supplementing the exhibit was also launched at the Merchant’s Quay museum.

Before the launch kicked off, spectators were entertained by the St Mary’s Prize Band, followed by a performance by Irish World Academy’s Róisín Ní Gallóglaigh, who sang rebel songs from the Fenian and Jacobite eras, to commence and finish the launch.

Though the commemorative showcase remembers those who fought, and died during the Easter Rising, the exhibit also examines layers of Limerick’s social and cultural life in 1916.

On loan from the Imperial War Museum, in London, the most prominent artefact is a green flag bearing the Limerick City coat of arms, which was in Roger Casement’s possession when he was arrested for trafficking ammunition from Germany.

The flag was given to Casement and fellow rebel Robert Monteith by Limerick-born German consul Thomas Gaffney.

Also sealed inside glass cases are Volunteer uniforms, letters, literature, booklets, a manifesto for the Limerick Young Ireland Society, portraits and paintings, Colivet memorabilia, and information on sporting and social life. The exhibition also showcases a brief history of the Limerick lace industry.

Deputy Mayor of Limerick City and County, Cllr Gerald Mitchell congratulated those involved and said that the exhibition also commemorates those who fought in World War One.

“This is very important. Thousands of Limerick men joined the British army and navy. Can you imagine how worried the families of the soldiers and sailors were, waiting to hear news about their young ones. In 1916 alone, 279 Limerick people died in the war.

“It also looks at life in 1916. It was full of new inventions. Limerick had world-class industries, such as bacon, clothing, and even women’s fashion was taking on the modern appearance. But sadly, there was a lot of poverty and hardship. Many people had no work and no money. They lived in small, dark and dirty houses or flats, without toilets, running water or even separate bedrooms,” he added.

Editor of the publication, Jacqui Hayes said at the launch that Limerick’s involvement in 1916 life is “not very well known”, and that she hopes the public learn a lot from the museum.

“The Daly family, for example, were the icons of nationalism. John Daly was the link to the previous rebellion, and he was this spiritual master who all the revolutionaries looked to. They all hugely respected him.”

Limerick City Museum and Archives scholar, William O’Neill said that they wanted to publish the book to complement the exhibition and to show that there was “colourful and diverse” life in Limerick 1916.

“It’s a fantastic feeling that people can come here and learn about these things. You should be learning about these people and getting a sense of who they were. We painted a picture of life in Limerick, good and bad, war and peace.

“And while we should be commemorating the people who died, there was an awful lot of life in Limerick. Surely, that should mean as much now as it did back then,” he said.

Josephine Cotter Coughlan, of Limerick City and County Council, congratulated all council officials, members of the public and groups involved in the project.

“It is an example of history at its best, resting on solid academic foundations, but accessible and meaningful to the community. You should all be very proud of your contribution for a greater understanding and appreciation of Limerick’s history and heritage, and I hope you all enjoy the exhibition.”

Mr Colivet concluded the launch, reflecting on his grandfather Michael, who grew up on Windmill Street.

“I am glad to see that the Limerick Volunteers are being remembered,” he started. “As a young father, it’s interesting to look over Michael Colivet’s life. Because, at the time of 1916, he was 34 years old, and he wasn’t a particularly young man. He was married three years with two small children. So why would somebody - and it’s hard for me to imagine now - go down that path. It’s difficult to conceive.”

His mother was a Fenian from Askeaton, while his father was a French navy sailor, who died after his ship sank in World War One, in 1917.

“Certainly, my grandfather inherited some of the French stubbornness and the Republican sentiments from both his father and his mother!” he enthused.

The former TD was arrested and jailed in Lincoln Prison for his role in the Rising. While there, he was elected MP for Limerick City, in 1918. He shared a cell with former President Éamon De Valera.

The exhibition is expected to be showcased for most of 2016, according to organisers.

Organisers said that 80-90% of the collection is from the Limerick City Museum and Archives.