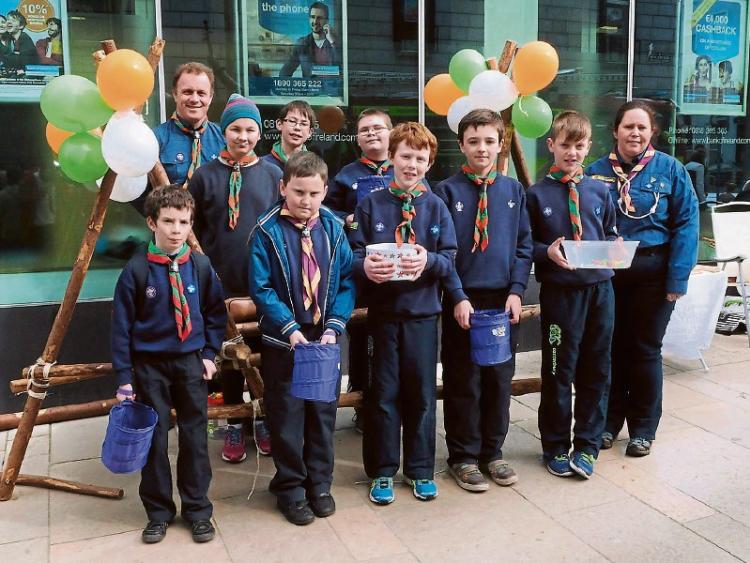 Attending the Limerick Festival of Kindness at Bedford Row were scouts from St Paul’s in Dooradoyle and Rathkeale Picture: Gareth Williams

MORE than 350 children’s faces were painted on Saturday, as part of a special festival of kindness which took place in Bedford Row in Limerick city.

For the second year in a row, Pay it Forward Limerick is running its annual kindness festival, which will conclude with a float in the city’s St Patrick’s Day parade.

Other events throughout this week include a special session at the UL Medical School, where sports psychologist Dr Declan Ahern will discuss sporting experiences with former Munster rugby star Liam Toland and Limerick FC manager Martin Russell, plus a special session where local businesses are being asked to give of their talents, gifts, skills and resources.

But the centrepiece of the festival took place in the heart of the city on Saturday, with several voluntary groups setting up camp in Bedford Row.

They included scouts, the Limerick Animal Welfare, and members of the armed forces – who gave out free lollipops to people enjoying the day.

Michael O’Mahony, who leads the Pay it Forward group, says he was delighted at the atmosphere on the day.

“It has been incredible. For me, the kindness among our volunteers and the general public, the interaction. That was something which stood out on Saturday. There wasn't a cross word, nothing was a problem. People were so understanding, waiting for the kids to be face-painted. We had seven face painters going full whack for four-hours. They painted the faces of over 350 kids,” he said.

After receiving lollipops, lemon drizzle cake, and fruity malt loaf on Saturday, many people approached Michael wanting to give a donation.

But he said as a group, Pay it Forward Limerick, will not take money.