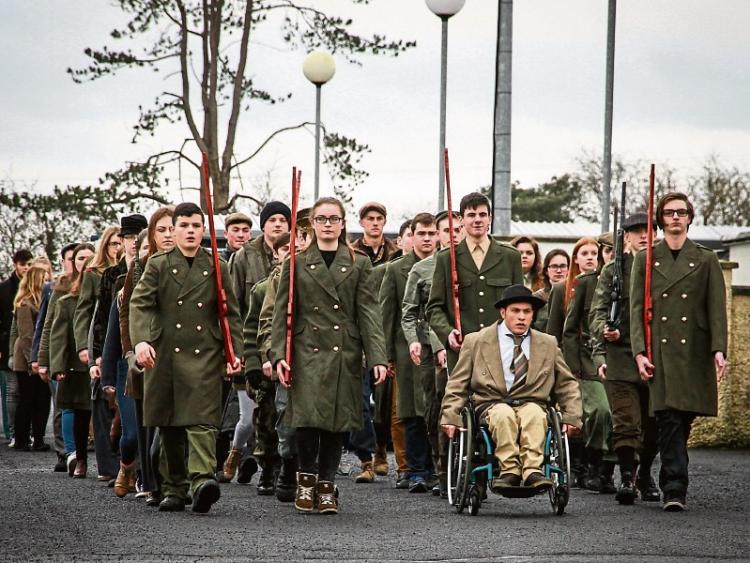 Forward march! Over 100 students will take place in the re-enactment on March 16

THE students of Coláiste Chiaráin are set to take up arms next Wednesday when they will stage a re-enactment of the 1916 Rising in the streets of Croom.

More than 100 students will take part, alongside teachers, ex-servicepeople and locals. They will march from the school to the centre of the town where events from the Rising will be recreated, including the executions of the rebel leaders.

The re-enactment was the brainchild of Patrick Hayes, head of the English department, and it has been taken up eagerly by his fellow staff members and students.

“We are all very excited. The kids are all really enthusiastic and they all wanted to take part,” said Ms Tobin.

For the past three weeks, the students and staff have been busy preparing their costumes and props, including giant banners that will be hung over the buildings in Croom to disguise them as Rising landmarks such as Liberty Hall and the GPO.

Everyone involved has also been trawling through their attics and closets to find old clothes, uniforms and even decommissioned guns that can be used to add authenticity to the occasion. While those taking part in the parade itself are all from the senior classes in the school, many of the younger students have been involved in the background preparations, making this a whole school effort.

Businesses in Croom have also been very supportive of the project which will see the streets of the town closed for the two hours of the parade. However, businesses will remain open for the duration.

“All the local businesses have been fantastic and the Civic Centre has been great too,” said Ms Tobin. “It has been all hands on deck for the last three weeks,” she added.

The parade will be led through the town by a group of ex-servicemen, followed by participants on horseback before the re-enactment itself takes place in the town centre. Along the way, there will also be music and rebel songs, while a narrator will explain the events as they unfold.

The town centre will be closed from 11.30 to 2.30 to accommodate the re-enactment. The local national school will also be closing for a half day to allow the children view the parade.

“It is a great occasion to merge both the school and local community together,” Ms Tobin explained.