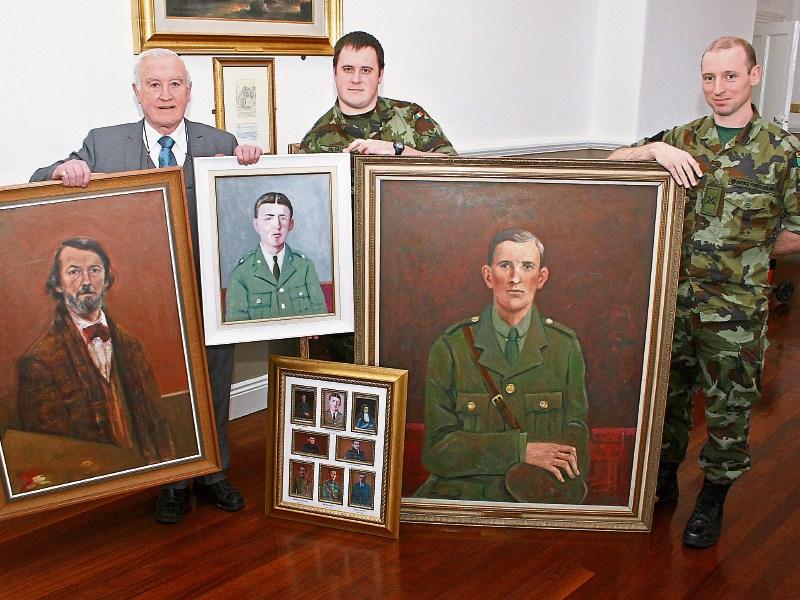 Tim Donovan, brother of the late Jack, shows some of the restored paintings to Commandant Donie McGrath and Captain Michael McGrath of the 12th Infantry Battalion at Sarsfield Barracks

PORTRAITS of some of the key figures in the 1916 Rising and subsequent War of Independence by the late artist Jack Donovan are in the process of being restored and will go on display in his native Rathkeale next month.

The paintings, which were made between 1969 and 1982, have been hanging in the officers mess of Sarsfield barracks for over 30 years.

The collection includes portraits of Limerick men Sean Wall from Bruff, Sean Finn from Rathkeale, Con Colbert from Monagea, Edward Daly from O’Curry Street in Limerick City, Captain Timothy Madigan, Shanagolden and Liam Lynch. Also included in the collection are portraits of Patrick Sarsfield, Michael Collins and a self portrait of the artist himself.

In 1969, Capt Michael Madden who was a senior officer in Sarsfield Barracks commissioned Jack Donovan – then head of the Limerick School of Art and Design – to paint the portrait of Sarsfield. The portraits of the 1916 leaders followed over the next 13 years.

The idea, according to Jack’s brother Tim Donovan, was that the 1916 leaders portrayed were the “natural successors" of Sarsfield as the legitimate representatives of the new republic.

To mark the centenary of the 1916 rising, a local committee which includes Tim Donovan as well as local historians John Cussen and Tom Toomey, undertook to get them cleaned and restored and mounted in an exhibition in Rathkeale.

“We did fundraising in Rathkeale, we got them all cleaned and I decided that this was the year they should ideally be displayed in the arts centre,” Tim explained

Having hung in an unheated mess hall for so long, it was not surprising that some of the paintings had deteriorated, with mould and other damage evident on a number of them. The committee commissioned Randall Hodkinson, the Limerick-based ecclesiastical decorator, to carry out restoration works on the paintings and the frames. That work is currently ongoing and is due to be completed in the coming weeks.

Jack Donovan, who died in June 2014, is regarded as a pivotal figure in the development of Irish art. As well as being a highly respected painter in his own right, he was credited with inspiring the next generation of Irish artists, including John Shinnors.

“Jack would have had his own views,” Tim said of his brother’s views of the Rising. “Jack would have been more of a pacifist, I would say, but very much interested in history.”

The exhibition will be launched in the Rathkeale arts centre on April 29. Afterwards, the paintings, along with Sean Finn’s uniform, will remain in display for a month before being returned to Sarsfield Barracks. Family members of the portrait subjects have also been invited to the launch.