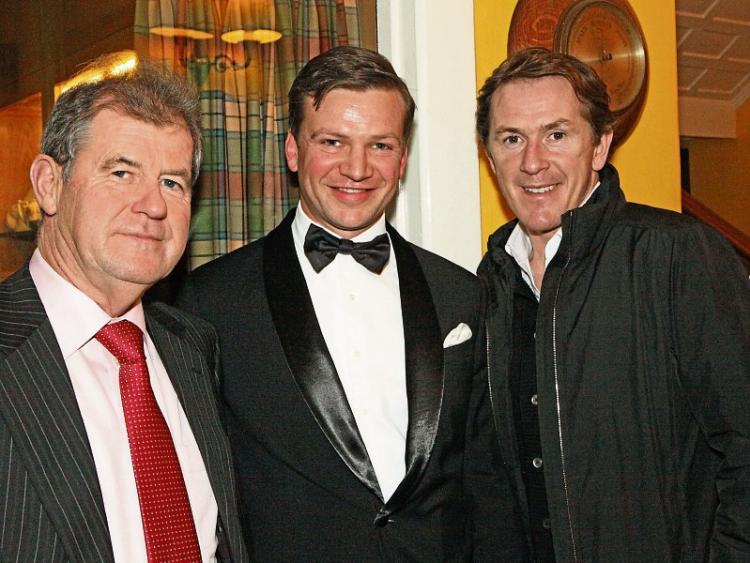 NEVER mind daffodils or crocuses, if it’s a true symbol of spring you’re after, look out for a Cheltenham Festival preview.

Examples of this once-rare bloom have been shooting up all over the country in recent years, but the hardy annual that is the Dunraven Arms preview, now in its 20th year, can claim to be the original of the species.

The Adare event attracted its usual full house on Sunday night and was run as a benefit for the injured jockeys fund. It's a popular cause at the best of times, but especially in Limerick given local heroes JT and Robbie McNamara are among its beneficiaries, having suffered life-changing  injuries on the racetrack.

Some 320 racing enthusiasts packed  in  to hear the thoughts of an expert panel on National Hunt’s big event, ably managed by the smooth Nick Luck.

The Channel 4 Racing frontman even had to conduct an auction of assorted horse-related items  at the beginning - if somewhat reluctantly.

“I’m not sure I have to do this job,” he said questioningly, waving a sheet containing items like animal straw pellets and a pallet of equine mineral and vitamin supplements. No such luck, Nick.

With the Irish Thorougbred breeders awards also to deal with ahead of the preview, diners having cleared their plates of beef or hake anxiously checked their watches as time ticked on towards 9.30. It seemed briefly as if this might be the first Cheltenham preview where no actual  Cheltenham previewing was performed. Thankfully not, however.

With British trainers Harry Fry and Oliver Sherwood joined by bookmaker Willie Power, tipster Tom ‘Pricewise’ Segal and Limerick’s own Andrew McNamara, the tone was one of good-humoured banter throughout and no-one was safe -  not even host Louis Murphy.

In the midst of a self-confessed “patriotic rant”,  McNamara said, “You know, this is a very English preview night. Louis Murphy brings these English trainers over, he wines them, dines them and sells them a few horses ...”

“But they’re not for sale,” interjected Luck, before Sherwood chimed in: “Wait until two in the morning...”

McNamara continued: “We have the best horses, the best jockeys and while the English will win more handicaps, we’re going to hammer them in the grade ones.”

While such a speech ought to have elicited a more hearty roar, Luck observed, there was little in the way of disagreement from the panel.

Later in the evening the mic was passed down to JP McManus to discuss the chances of his many runners. It was a brief segment.

On the prospects of one of his best horses, More Of That, we were treated to a classic piece of non-committal preview speak - “He has his chance,” JP softly intoned.

He was more forthcoming, however,  about the prospects of a repeat win for On The Fringe,  trained locally by Enda Bolger.

Despite an uninspiring return to action at Leopardstown recently, there appears plenty of confidence that last year’s Foxhunters Chase hero will repeat the trick. Cue much scribbling in notebooks.

Sitting beside JP, multiple champion jockey AP McCoy was more expansive with his opinions and was especially warm on the chances of Don Cossack in the big one, the Timico Cheltenham Gold Cup.

McCoy suggested that but for his mishap at the penultimate fence, Don Cossack would have won the King George chase at Kempton.

As for Vautour, who was pipped at the post in the same race, McCoy believes he is not going to appreciate the extra distance of the Gold Cup and won't be winning it.

There were further  contributions by phone from champion jockey-elect Richard Johnson - who nominated Kruzhlinin in the Ultima handicap chase  and Rock The Kasbah in the Coral Cup as his best chances - and clerk of the course Simon Claisse.

Even the normally dour Claisse got in on the jokes describing his favoured weather forecaster  as the least inaccurate he knows.

For the record the going was forecast to be good to soft for the opening day of the four-day meeting, a revelation on a par with night follows day.

While Willie Mullins has seen some high-profile fancies cry off with injury in the past month, he is still expected to pocket the champion trainer title.

Of his team, Annie Power  and Un De Sceaux, though not actually recommended as bets, were thought most likely winners of the Champion Hurdle and Champion Chase respectively. Roi Des Francs was popular in the NH Chase,  and  Vroum Vroum Mag and Limini are justifiably hot favourites for the two mares races.

Douvan was deemed so superior to his opposition in the Arkle chase at 2.05 on the opening day, that Segal reckoned they should leave the cloth on his back and he’d win the Champion Hurdle at 3.20.

There wasn’t  much love for Min, however, Mullins’ hot favourite for the opening race of day one.

Having learned from previous years the discussion was moved on briskly and despite the early distractions and late start, we were finished shortly after 11.30. Which only leaves the tantalising wait until Tuesday afternoon when it all kicks off again.