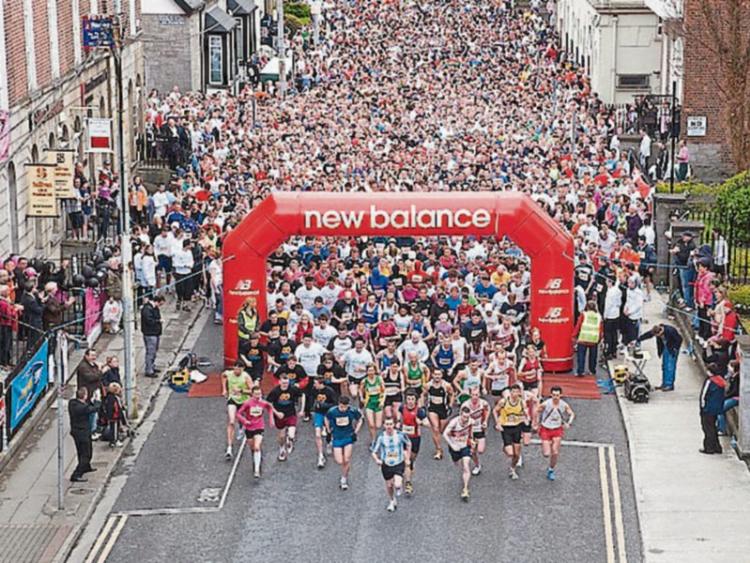 On their marks, get set: Thousands of people, running for a plethora or causes, will line out again near Pery Square for the series of runs on Sunday, May 1

WITH less than 50 days to go, over 5,000 people people have now registered for the Barringtons Hospital Great Limerick Run.

Over 4,000 people are now registered to walk and run the series of races on Sunday, May 1, while over 700 kids are due to take part in the kids runs on the Saturday.

“The entries are phenomenal with still another eight weeks to go before May 1. Hitting our target of having 14,000 to 15,000 entries is now more than achievable, and as with previous years we’ll probably sell out well before the day, so again we’d advise people to enter early,” said race director John Cleary.

He added that due to popular demand the relay marathon and the Fittest Company Challenge will return this year. Twelve teams have already registered, and that figure is expected to rise to between 60 and 80. “We really under-estimated how popular that race is. I guess it comes with serious bragging rights, in terms of whoever wins the overall title and generates greater motivation amongst colleagues,” he added.

Limerick law firm Holmes O’Malley Sexton Solicitor will again be sponsoring the Fittest Company Challenge for the third year running. Last year, over 110 companies of all sizes registered to take part and the competition was fierce, with Eircom, Barringtons Hospital, Foot Solutions Limerick and Feale Fit winning in their respective categories.

Companies are categorised according to employee numbers with points allocated per employee that cross the finishing line. The Fittest Company Challenge is open to companies of all sizes. There are categories for micro, small, medium and large size companies. Participants do not need to be runners, as walkers are also encouraged to participate in the Barringtons Hospital Great Limerick Run.

This year the Expo at the UL Arena will run to two days, on Friday and Saturday, to cater to demand.

“It’s all systems go now,” continued John. “Our lead runners are coming back from Kenya to defend their title again this year. They are premier, world-class athletes, and it’s a sight to behold to see them running – their feet hardly touch the ground.”

Up to 3,500 children will take part in the kids fun in UL on Saturday. “It’s the biggest kids event in the country by a long way, and €5 from every entry goes back to the school. The kids themselves have fundraising cards, so multiples of that sum go back to a good cause,” he said.

Fitness and athletic prowess, aside hundreds of people will be running for a cause, or a person, close to their hearts.

Two sisters will be running on Sunday, May 1, in memory of their brother Mike, who passed away at just 34 from lung cancer. Sisters Olivia and Ruth, along with their friends, will be taking part in the half marathon and 10k routes in memory of their brother and friend, Mike Kett, from Raheen, who sadly passed away on April 10, 2014, in Milford Hospice.

Mike was diagnosed with lung cancer at the young age of 34 and passed just eight weeks later. Only two days after Mike’s passing, some of his closest friends set up a charity page in his memory to fundraise for Milford Hospice, who took great care of him in his final days.

Mike was a runner himself and had completed his first half marathon in Dingle 2013, and had also spoken about doing the Barringtons Hospital Great Limerick Run had he not been sick. His family said that taking part in the run seemed like the right thing to do it in his memory, as he had passed away only three weeks before.

And so on May 4, 2014, a group of his close friends stepped out on what was a very emotional day in their ‘Every Mile for Mike’ Milford Hospice vests, kindly sponsored by The Hi-way Bar and Restaurant, to complete the 10k and Half Marathon. The group were completely overwhelmed by everyone's generosity raising over €10,300 between them.  Last year they did it all over again, bringing the total to almost €14,000. A third sister, Christina, also raised more than €1,000 from doing a sky dive last summer.

“Milford Hospice, in our hearts, is a truly deserving charity,” said Olivia. “They couldn't have done more for Mike or us his family in his short time there. It is a beautiful, peaceful place with very friendly, compassionate staff. The work they do is honourable and we'll be glad to step out again this year on May 1 in our Every Mile for Mike vests and do our best to raise what we can again.”

Aside from Kenya, the race also attracts entrants from other sides of the pond. Chicago-based coach Paddy Savage, 72, has been bringing athletes to run in Ireland since 1992. During the last 25 years, the Niles West/Oakton Runners Club has run in Swords, Loughrea, Limerick, Cork and many other areas of Ireland. And this year they’re back for the Great Limerick Run.

After meeting with the Limerick race director a few years ago, Paddy offered to help some of the leaders and officials at the Great Limerick Run enter the Chicago Marathon. Now an exchange of runners behind Limerick and the Windy City is thriving, with 18 athletes from Chicago taking part in the Limerick run this year.