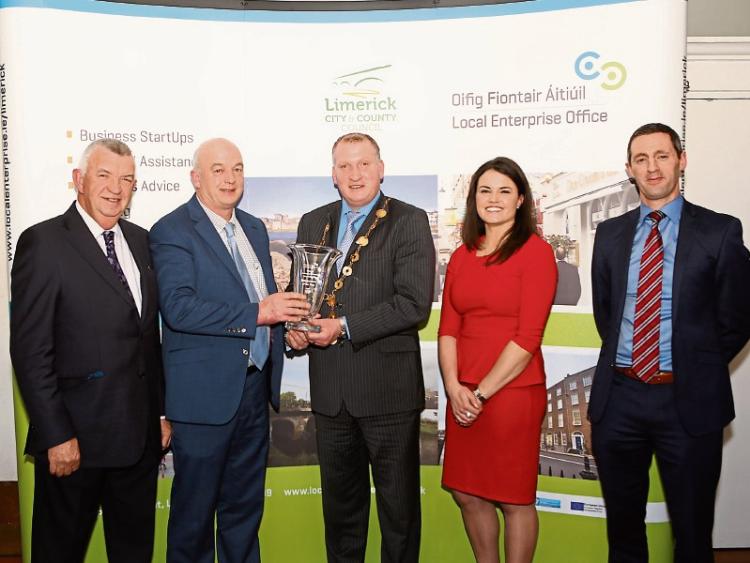 BOSSES of a Limerick-based sauce supply firm are celebrating after winning the top prize at the Limerick National Enterprise Awards.

Bespoke Sauce Company, based in Raheen in the city, was named Entrepreneur of the Year at the final in Adare's Dunraven Arms Hotel this Tuesday afternoon.

The company, which services the national and international food industry, won best manufacturing business before winning the overall prize.

The other category winners at the ceremony were McNulty's Fuels, Hospital, McAdare, based in Adare, EJS Plastics, Galvone Industrial Estate and Wellnice Pops, based at Tournafulla.

But it is the Bespoke Sauce Company which will go forward as Limerick's representatives in the National Final of the National Enterprise Awards which will be held on June 9 in the Aviva Stadium.

Congratulating the winners, Mayor Liam Galvin said: "Those micro-enterprises in receipt of awards are at the leading edge of the economic growth and development of Limerick City and County.

“Ninety per cent of all businesses in Limerick are micro-enterprises and it is reassuring to see that the strong entrepreneurial spirit that has always existed in Limerick is continuing to produce ambitious and competent young business people capable of generating a range of new business ideas and consequently, new employment opportunities for the wider community."

Eamon Ryan, head of enterprise with Limerick City and County Council added: "The Local Enterprise Office, through its programme of support puts micro and small business at the heart of job creation locally.

“Part of this process is to provide local entrepreneurs with a platform to showcase their business ideas to a wider audience. In doing so, LEO Limerick is contributing to the success of our smaller indigenous businesses, both new and existing, which are central to the future economic development of this region."