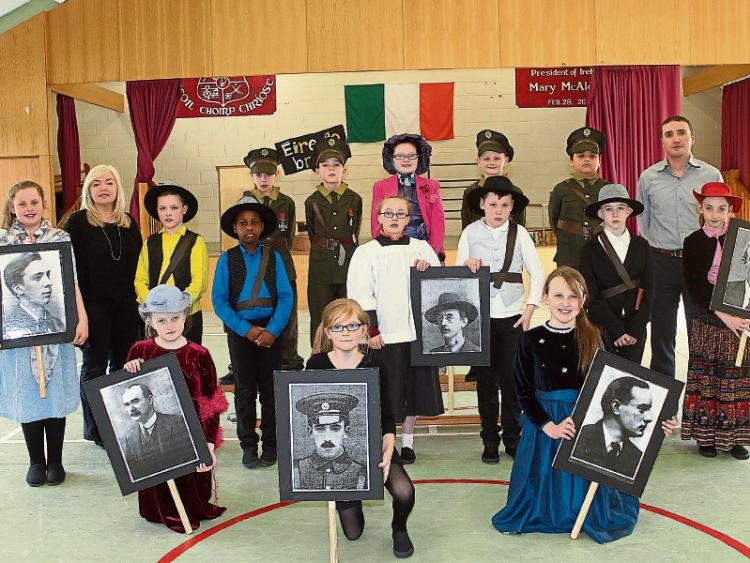 STUDENTS at a northside primary school are celebrating after being recognised in the Bord Gais Energy Student Theatre awards.

Fifth and sixth class pupils at Corpus Christi national school in Moyross last summer played two sold out evenings at the Limerick Insititute of Technology’s Millennium Theatre, with their play ‘Reeling in the Years’ looking back at the first 30 years of education in the estate.

Fionnuala Bromell, who wrote the play, entered it into the annual student theatre awards, and was delighted when a representative of the ceremony wrote back offering tickets for the cast to Annie at the Bord Gais Energy Theatre in Dublin.

While 30 students from the school will travel up to watch this next month, they will find out later this week whether they are on the shortlist for the awards, which take place in May.

In the meantime, the talented performers will return to the LIT Millennium Theatre this Friday lunchtime for a play all about the 1916 Easter Rising.

Of winning the trip to Dublin, Ms Bromell said: “We were absolutely over the moon – we couldn't believe it! When they rang us, they said they could not believe the talent of the children.”

Speaking about Friday’s play, Ms Bromell said she hopes it will bring the Easter Rising to life for today’s youngsters – and also show the human side to the seminal event.

She said: “It is all about the Easter Rising and the people behind it. We wanted to show the meeting with Padraig Pearse and all his men, and how they decided they were going to rise up. They had to go home that night and talk to their families. Padraig and William Pearse went to their mam, and told her to be prepared, that they mightn't come back. She is very supportive of them, that it is the right thing to do. But Thomas McDonagh goes to his wife and child, and they are not to keen for him to go. So it looks at both sides of the coin. These are real people with families, mums and dads.”

There is a Limerick connection in the play in the shape of Ned Daly, who was a commandant of Dublin’s first battalion during the 1916 Rising.

Ten-year old Thomondgate lad Colby Crawford, who plays Joseph Plunkett, is looking forward to the experience of taking part in the performance.

He said: “There have been lots of rehearsals, but I have enjoyed it. I enjoy mostly when we do the songs and the dances."

Paul Reddan, 9, of Hartigan Villas, has the interesting role as the leader of the British Army.

He said: “It has been great, as I have learnt what happened in 1916. I enjoyed saying 'What the devil is going on here' in an English accent.”