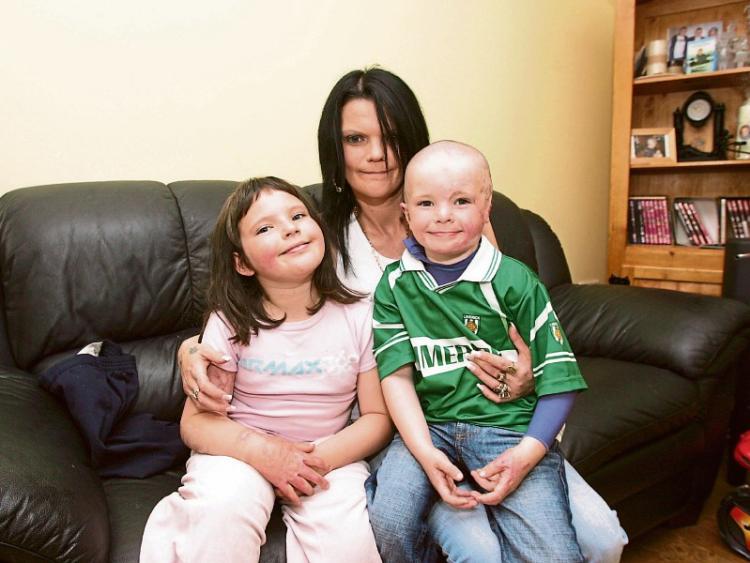 Sheila Murray pictured with Millie and Gavin in 2011

NEARLY ten years on after they were horrifically burned in a petrol bomb attack in Limerick, Gavin and Millie Murray have said those behind the attack 'can't kill their smiles'.

Proud mum Sheila Murray has this week described her children, Gavin, now 13, and 15-year-old Millie, as her “little fighters”.

The children suffered horrific skin burns in an infamous petrol bomb attack in Moyross nearly 10 years ago, which horrified the nation and catapulted crime in Limerick into the national spotlight.

On September 10, 2006, a plastic bottle was filled with petrol was set alight and thrown in through the rear window of their mother Sheila’s Toyota Corolla in Moyross, after she refused to give someone a lift into the city. The children were aged four and six at the time.

For years Gavin and Millie continued to require skin grafts and surgery as a result of the disfigurements they suffered.

Such was their trauma, that the singer Michael Jackson had requested to meet with them on several occasions.

Dr Patrick Treacy earlier revealed to the Limerick Leader that during the time Jackson lived in Ireland he asked about the children every day, and “cried” after hearing about the attack on them.

“Gavin and Millie have been through so much but they just keep going. They are my little fighters. I am so proud of them,” said mum Sheila this week.

Millie also spoke of her upset at her mum being told that she and Gavin had only 24 hours to live.

“We have it all to look forward to when we hit 18,” she said in an interview with The Irish Sun.

She said people have given them strange looks and made nasty remarks due to their scars.

Robert Sheehan, who was murdered aged 21 in 2012, acted as a look-out man on September 10, 2006 as two other men petrol-bombed the car the children were sitting in.

His father Patrick later said after the attack that his son 'never got over' what happened to the children that day.

Jonathan O'Donoghue, then 18, of Pineview Gardens, Moyross, who was described as the “main mover” in the affair, was sentenced to eight years imprisonment with two years suspended.

John Mitchell, 18, of Delmege Park, Moyross, was given a seven-year sentence, with two years suspended.

Both O'Donoghue and Mitchell pleaded guilty to intentionally or recklessly causing serious harm to the two children.

Robert Sheehan, then 17, also of Delmege Park, pleaded guilty to two charges of endangerment and was sentenced to two years detention in St Patrick's Institution and bound to the peace for four years. Mitchell and O'Donoghue who prepared the petrol bomb fled from the scene, while Sheehan helped to pull Gavin from the car.

The court heard that gardai accepted the three did not know the two children were in the car.

Judge Carroll Moran, when he imposed sentence at the time, said: “Throwing petrol bombs around is bad enough, but to do so for such a trifling reason for not getting a lift into town elevates this offence into anarchic nihilism.”

Gavin's left ear was burnt off in the attack and his body suffered 22 per cent burns.

Millie suffered third degree burns to her right arm, right thigh and back. Approximately 20 per cent of her body was burnt.

Both children required treatment every day after the attack and had to wear protective clothing for their injuries.

Mr O'Donoghue has now been released from jail.

“It was a huge shock to see him,” said Sheila, “but one thing is for sure, they’ll never beat us down.

“We’ve recently moved house to start afresh. We didn’t want to have to put up with crap. It was alright for me when the kids were small and they didn’t understand. We were living so close to Moyross, all the friends of the people who burnt them were still living there.”

She said her children were frightened when they saw him on the street and decided it was time to move.

“When someone does that to your children, you don’t want them around your door.” She insisted that they were not informed by the authorities when O’Donoghue was released after serving his sentence. “We never even knew he was out until we saw him in the area.

“I went to the Garda station and said, ‘You should have told us that he was out.’

“Gavin used to love going out, hanging around with his friends but he just didn’t go anymore because O’Donoghue was around. Gavin just stayed in his room, stayed in his own house most of the time. He was terrified to go out.

“Millie was the same. We felt like prisoners in our own home, we couldn’t go anywhere. You don’t want to go outside the door.”

“Then you get people saying, ‘Well he did his time.’ But what about ours? Gavin and Millie are doing their time - they will be scarred for life. How do you get over that?”

However, she added; “They are always so upbeat, they love to play. Gavin loves to going rowing on the water. Millie loves listening to music and going for walks. I just want them to be as happy as possible.”