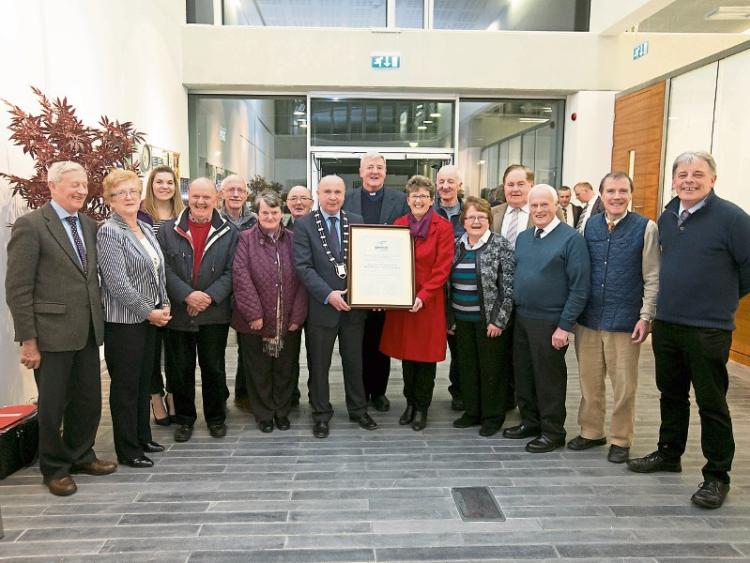 WILLIE O’Dea wasn’t the only Kilteely native celebrating over the weekend.

Community volunteers in Kilteely-Dromkeen were given the highest honour the Cappamore-Kilmallock municipal district can bestow – a civic reception.

It was in recognition of their success in the annual national Pride of Place competition. They were named overall winners for population centres of up to 300.

After the win John McCarthy, co-ordinator of Kilteely-Dromkeen Tidy Towns, said: “It’s like winning the All-Ireland!” So this must be the next best feeling as it is like triumphing in a county final.

Cllr Bill O’Donnell, cathaoirleach of the municipal district, said in claiming the prestigious prize, “You beat off competition from communities the length and breadth of Ireland in the process”.

“Municipal district receptions are very special events and they present a good opportunity for elected Members to give official recognition to members of the local community.

“Being included among the main winners in the 2015 Pride of Place competition is an outstanding achievement for the community of Kilteely-Dromkeen, which has been officially recognised in the Tidy Towns, Going for Gold and Limerick In Bloom competitions down through the years,” said Cllr O’Donnell, at Áras Mainchin Seoighe in Kilmallock.

Mr McCarthy thanked the local community for getting 100% behind their Pride of Place bid.

“It all started when we held a meeting to organise our Team Limerick Clean-Up last year. I spotted the ad in the Leader looking for nominations and everybody backed it. Over 30 different parish organisations were involved,” said Mr McCarthy, who thanked his fellow committee members.

They have spearheaded a number of initiatives including walking and driving routes, information boards, a mural and every year thousands is raised and spent on flowers, shrubs and landscaping.

Mr McCarthy, who will enter his seventies this month, has lived in the parish all his life and says: “I have never seen Kilteely looking better. People from other parishes are coming to see it.”

Mr O’Donnell, on behalf of his fellow councillors, said it is clear all their hard work is paying off and thanked them for representing Limerick with “enormous pride and distinction”.