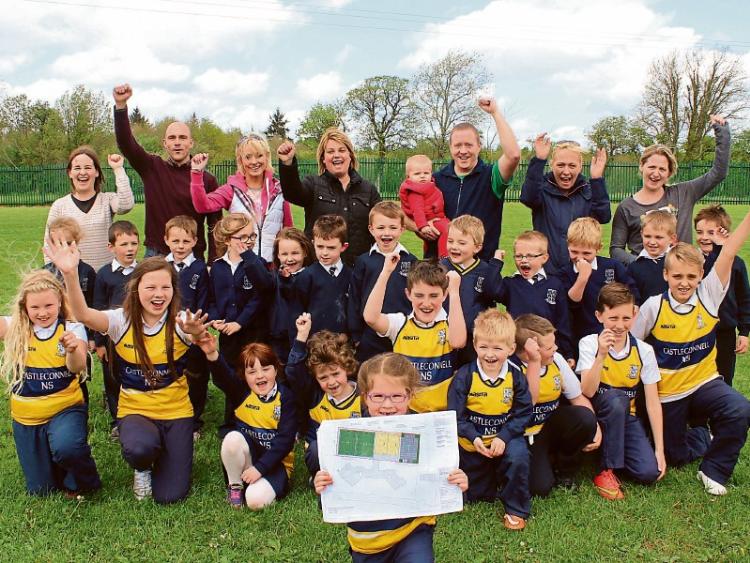 Meabh O'Callaghan hold up the plans for their new playing area, with support from her classmates, teachers, and parents

IT IS A difficult question to answer why a village the size of Castleconnell doesn’t have an all-weather sports facility.

But locals have a plan in place to solve the problem and proceeds from a monster table quiz this Friday, March 4 at 8pm in the Castle Oaks Hotel will further their goals.

A training size astroturf pitch, two basketball courts, a walking track, car-park and changing facilities is to be located at the back of Castleconnell National School.

Richie Ryan, principal, stresses that it isn’t just for the school.

“It is for the whole community. A community the size of Castleconnell has no sports facility whatsoever – no where for children to play in the village. That is the whole idea of this.

“It is not just for the school during school hours it is for everyone after school hours and weekends,” said Mr Ryan.

”Everybody has a vested interest in it,” said Mr Ryan, whose predecessor Derbhile de Paor played an instrumental role in getting the project off the ground with the support of the board of management and parents association.

The work is planned in three phases and will cost in excess of €485,000. The first phase is over €100,000 and will involve the construction of the astroturf pitch.

Already from a monster quiz last year and a run they have collected around €16,000. They have also applied for a sports capital grant and Mr Ryan says if they get the green light they will break ground as soon as possible afterwards.

“The whole community has come together as everybody recognises the importance of it to the village. This is the ideal location for it,” he said.

Being so close to the centre of the Castleconnell it is seen as an important element of its overall development.

Anybody who supports Friday night’s quiz is investing in their children’s future.

“We are hoping for 25 sponsored tables. It costs €100 to sponsor a table. Everybody who sponsors a table or donates a prize will be recognised on the night.

“Teams of four are €20 and it will be a general knowledge quiz. There will also be a raffle with lots of great prizes,” said Mr Ryan.