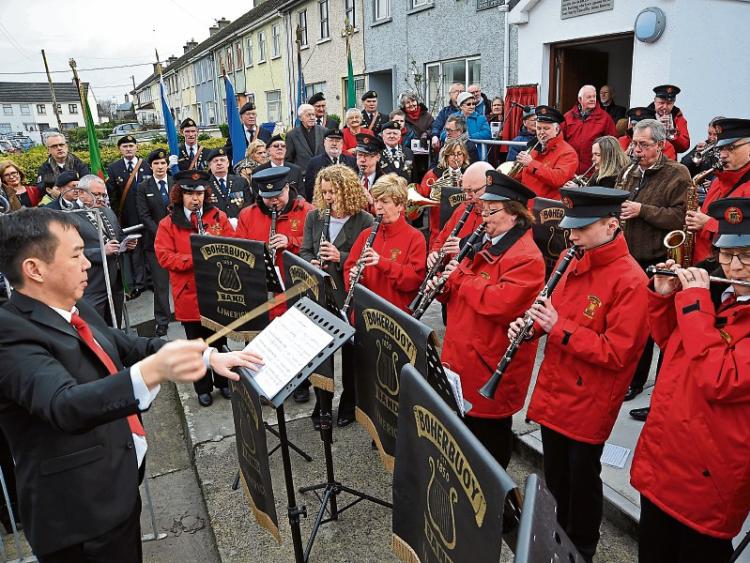 And the band played on: The Boherbuoy Band proudly clad in their red uniforms, play outside their refurbished bandhall

THE sun shone on the Boherbuoy Band as the group opened its newly refurbished bandhall in Limerick city.

There was a festive atmosphere in Lord Edward Street as the president of the oldest brass band in the city, Patrick Phelan, and its vice-president, Declan Hickey, cut the ribbon at their new-look bandhall, which has been made possible thanks to €100,000 funding from JP McManus, Limerick City and County Council and other sources.

As part of the refurbishment, the roof was replaced, while new heating and sanitary systems were put in place. Problems with dampness has also been eliminated.

The upshot, band PRO Mary Phelan said, is the group – founded 165 years ago – will be able to practice in warmth and comfort in the winter – while in the summer, the hall will benefit from more natural light.

Joining band members at the opening were Education Minister Jan O’Sullivan, Cllr James Collins of the Metropolitan District, which has allocated €10,000 in funding to the project, Helen O’Donnell, Limerick Tidy Towns and the metropolitan mayor Jerry O’Dea.

There was a festive atmosphere at the opening, with bands travelling down to Limerick from Ennis, Tipperary and Dublin. Many bands from neighbouring parishes were also in attendance, including the St Mary’s Fife and Drum band.

Mary said the public’s support means so much.

“It is normally so hard to get support from anywhere. It is the people of Limerick who have been looking after us for the last number of years, so it was great to get funding from JP McManus, and the GMA fund to put this together. We could not have done it without them – we would still be waiting. It’s a new home for life, please God. Nice and warm,” she smiled.

Ms O’Sullivan attended the opening, before heading off to witness her election at the UL Arena.

She said: “It was lovely to see the age spread, with the older members of the band. They have a strong family tradition there with the Phelans.

“But they have also brought on younger members and given them the opportunity to learn instruments. That is one of the most positive things about the Boherbuoy Band – they have a tremendous history.”

She pointed out her political mentor, the late Jim Kemmy, also enjoyed a long association with the band, and helped out in a previous renovation effort.