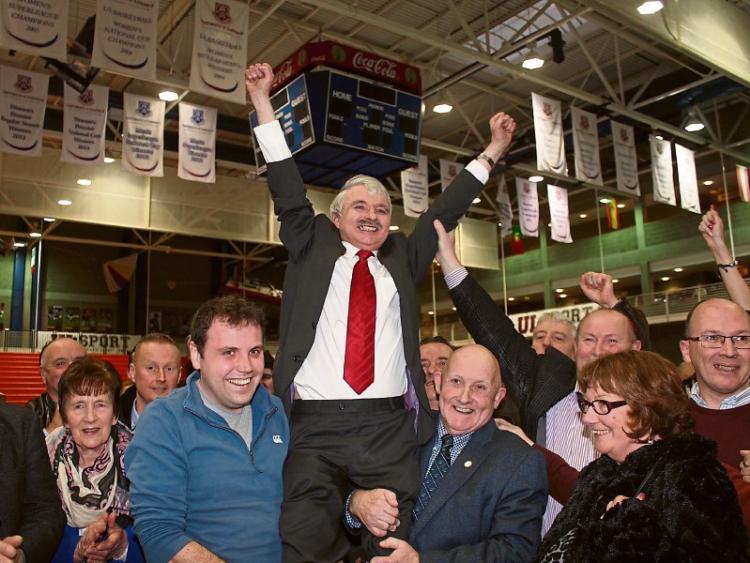 Willie O'Dea celebrates his re-election. But who will join him on the ticket in the event of another election?

THE general election is only barely over – but already a battle has begun to decide who will join Fianna Fail polltopper Willie O’Dea on the party's ticket in Limerick city next time out.

With some political commentators predicting another election later this year, and Fianna Fail very much in recovery, it looks likely Mr O’Dea – who secured 12,999 first preferences – will have a running mate the next time the country goes to the polls.

The polltopper ran on his own this time following a directive from party headquarters. This came in spite of Cllr James Collins’ name being put forward and then withdrawn following the directive.

But after the long-serving TD romped home with a surplus of 3,646, questions were asked as to why another candidate was not added in the city.

Some Fianna Fail loyalists were dismayed to see hundreds of votes from Mr O’Dea’s surplus transfer to Sinn Fein’s Maurice Quinlivan, believing they could have helped to elect a second party candidate.

A Fianna Fail source told the Limerick Leader that if there is another election soon, Cllr Collins – who topped the poll in the local elections at City West in 2014 –  could contest a selection convention. He is highly regarded in local Fianna Fail circles.

A number of other candidates could likely put their name forward.

Cllr Kieran O’Hanlon said: “I’m sure at the next election, whenever that is, this strategy [two candidates] would be looked at by headquarters. James is obviously interested in the position. I don’t know of anyone else interested.”

Another Fianna Fail source – who is politically close to Cllr Collins – said: “I know a lot of the grass roots members would be asking for this to be considered. In a tight situation like this, every seat matters.

“James could surely bring his own support in to go with Willie’s surplus. He would have to be in the mix.”

Cllr Cathal Crowe, who is based in Westbury, Co Clare – which is now part of the Limerick City constituency – said his name was put forward to run alongside Willie O’Dea at the selection convention for Election 2016, before the directive.

But he asked for it to be withdrawn because he did not want to run against his political mentor.

Cllr Collins said: “I represent Fianna Fail in the council, at City Hall and County Hall. We have elected our Dail deputy this time. Whether there is going to be another election soon is only speculation.”