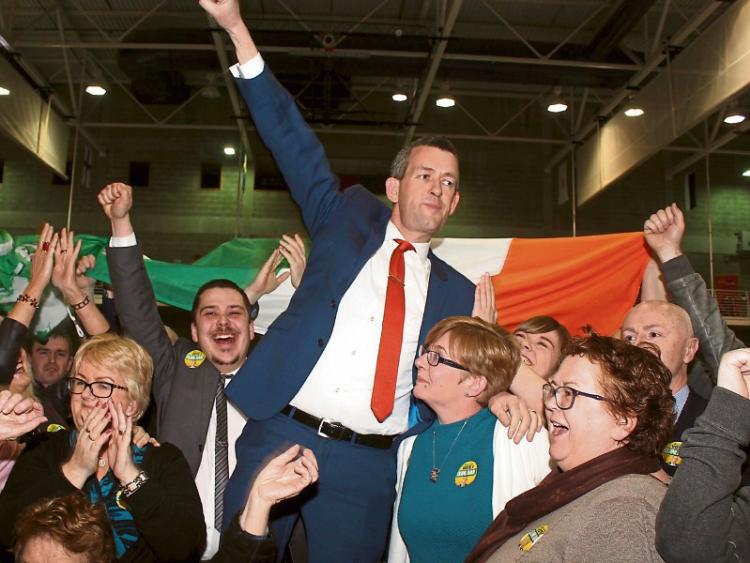 Maurice Quinlivan celebrates his election to the 32nd Dail

MAURICE Quinlivan has created history in Limerick, becoming the first Sinn Fein TD elected in the city for 93 years.

He passed the quota at the fifth count, securing 10,517 votes in total.

Surrounded by his supporters - including wife Sue and mother Marie - Cllr Quinlivan said: "I think people in Limerick have voted for progressive change, and we are delighted we got elected today. We got in ahead of two ministers, so we are really happy to have done that. People put their trust in me. I am delighted and humbled with it."

He paid tribute to his campaign team hailing them as "the best in the state".

Independent Newspapers have been strongly critical in its coverage of Sinn Fein throughout the campaign.

In response to this, Mr Quinlivan said: "We tried to fight a positive campaign. I think the Irish Independent campaign was nasty, vicious and will probably go down in history as probably the most undemocratic decision by any newspaper in an election in western Europe."

The former northside councillor - who topped the poll in the 2014 local election - secured a healthy transfer of 633 votes from Willie O'Dea's surplus.

The pair have a fractious relationship dating back to 2009 when Mr Quinlivan took the Fianna Fail TD to court over false comments made linking him with a brothel.

Mr Quinlivan jokingly said: "Thanks to the transfer from Willie O'Dea. Myself and himself have been friends for years!"

Asked if he would work with him in the next Dail, he said: "In the interests of Limerick, I would work with anybody. I would have no problem whatsoever working with any of the elected TDs."

With Labour TD Jan O'Sullivan expected to follow Mr Quinlivan into the final seat, Limerick City will have returned two deputies from the left wing for the first time in living memory.

He says this is long overdue.

"I always believed there should have been two seats for thge left, if not more. People in certain areas of the city have voted against their own interests. This is changing. People are realising they need to vote in their own interests against parties which do not look afgter ordinarty working people. This is what has happened in this election," Mr Quinlivan said.

The last Sinn Fein TD to represent Limerick City was Michael Colivet in 1923, whom Mr Quinlivan claims a family link to.

"It's an honour for me. I am thinking of my late father at the moment. He would have been very proud," he concluded.