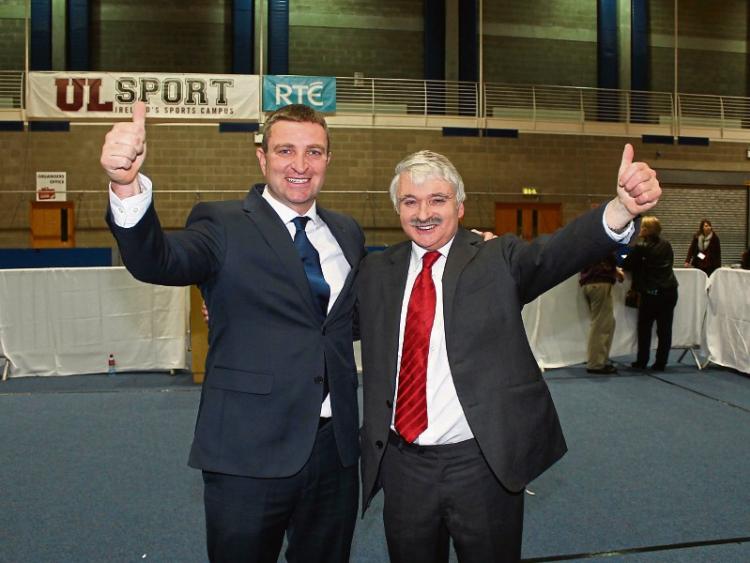 “FIANNA Fail are back in business,” said Deputy Willie O’Dea with the widest of smiles as he clasped the hand of fellow poll topper in Limerick, Deputy Niall Collins.

“My very good friend Niall – we will both be travelling to Dublin again,” he added.

“It’s a very different atmosphere here to five years ago.  Niall was elected on, I forget which count, and I had to wait until the sixth count which was a terrible humiliation,” he laughed.

“There is a real buzz about the place today but I must say I have certain mixed emotions because one of my best friends Joe Crowley unfortunately died suddenly during the campaign – that cast a bit of a pall on our celebrations.

“We miss him sorely. He would have been here and my thoughts are with his wife and family. I want them to know my thoughts are with them. He would be delighted. I remember us having various conversations about various parts of the north side city where certain people got more votes last time than they should have got and he was very concerned that I should win the boxes there and from what I can see from the count I have won all but one of them so he would be particularly delighted with that.

“Never the less looking at the overall picture, Fianna Fail are doing magnificently well. Micheal Martin is doing a tremendous job – a tremendous job and the parliamentary party as a whole has worked very hard. We have reorganised. We got the people on the ground. We got the teams in place and we will go from strength to strength.”

When asked if he would like to see himself back around the Cabinet table if Fianna Fail is to form the next government he replied: “Being at the Cabinet can be a very hazardous occupation as I found out to my cost.

“My main priority was to get re-elected and maximise the Fianna Fail vote here and we have done that and I want to thank all my supporters and campaign team and the people who voted for me and I want to congratulate my good and neighbour Niall Collins on his magnificent show in West Limerick. People who were writing off Fianna Fail five years ago and predicting our demise – well, they will have to think again!”

In relation to running a second candidate in Limerick City he said: “If we knew then what we know now, but we don’t have the gift of prophecy unfortunately.”