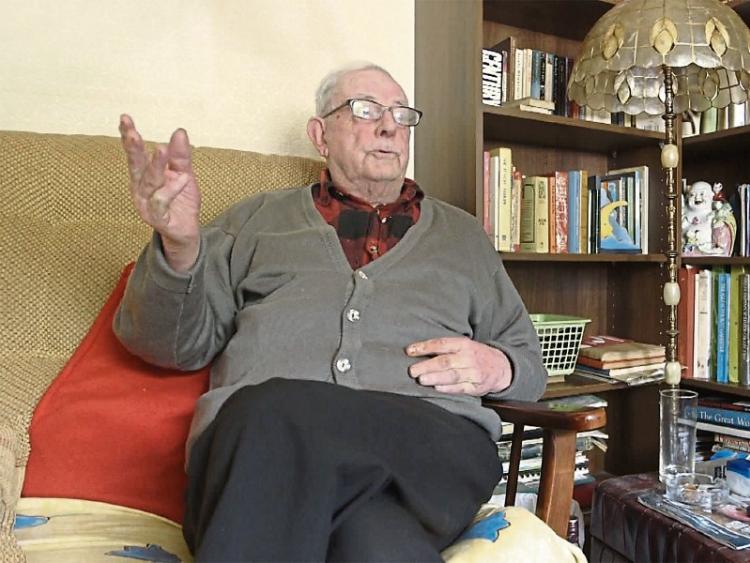 Pallasgreen man Jim Kennedy, who is now 81, pictured relaxing at home in Dublin

A FORMER Limerick priest who married a nun is one of 13 Irish men to feature in a new documentary premiering at this week’s Dublin Film Festival.

The Judas Iscariot Lunch is a story about faith, religion, love and life after the priesthood. The ex-priests, including 81-year-old James Kennedy, from Pallasgreen, speak candidly about how they came to be missionaries in East Asia, the Pacific and South America in the 1960s and 1970s.

The documentary, directed by Teresa O'Grady-Peyton and produced by TJ O'Grady-Peyton, tells the story of Columban missionary priests  “who took the brave, honourable and risky decision to leave active ministry and set out on totally different and difficult life journey”.

“It is often funny, sometimes sad, beautiful, raw and thought-provoking,” say the makers.

The priests were branded Judas Iscariots by Pope Paul VI, hence the name of the feature.

“We never saw it like that ... We see ourselves as pioneers!” say the men.

James, better known as Jim, gives a powerful account of his story of formation, celibacy, isolation, faith and the struggle to leave the priesthood.

“When I look back now I don't believe I had any faith. All I had was a kind of social conditioning. You heard old women say ‘maybe Jim would become a priest’ and you kind of went along with that,” he said.

Jim was born in Pallasgreen in 1934. He was taught in Brackile National School by his uncle Bill Kennedy before attending Doon CBS Secondary School.

“The best years of my life,” he said.

Jim decided to become a priest because “there was no money for university”.

“I was the first son. My mother Nora, who had two brothers priests, probably had an idea I might follow suit, but the Kennedys never had anyone belonging to them priests.

“At the time I had a first cousin in Dalgan [Columban Missionaries base in Navan] and he invited me to join him there. He left three months before ordination and became a creamery manager in Kildimo.”

Jim was ordained to the priesthood in 1958. After that he was appointed assistant editor of the Far East magazine and studied in the University of Chicago before being assigned to the Philippines. All this despite the missions being “accidental” and “I just fell into it”.

Jim vividly remembers the point he realised that he didn’t want to be a priest any more.

“My father died while I was studying Tagalog [a language spoken in the Philippines] in Manila in 1971 and during the High Mass for him I realised that while the archbishop, Paddy Cronin, was talking about heaven for my father I suddenly couldn’t see him there.

”All I had were the memories of him like the sound of his hobnailed boots on the cement floor. So, if you don’t believe in an afterlife it would be stupid to continue as a priest.”

While he struggled with the decision he continued on with his duties until 1977 when a special woman entered his life.

“I needed help especially in my second parish of Candelaria, Zambales, Philippines. I got Sister Vicenta Benavidez, a Sister of St Paul de Chartres Congregation, to liaise between me and the people. She was a journalism graduate.”

They both left their religious roles, “one thing led to another” and they started a new life together.

They were married civilly in Manila on July 7, 1977, and two children followed, Paddy and Noriana.

"All of us now have children who are in their own way contributing to civilisation. If we hadn't left that wouldn't exist,” said Jim.

His wife is an active churchgoer but he isn’t.

“I’ve no problem with other people’s choices. I would now describe myself as a humanist.”

Now aged 81, Jim is living in Lucan, Dublin. after working for Smurfit Publications until September 1999 and remains a proud Limerick man.

Jim described his experiences in Philippines in his memoir Fat God Thin God which was published in 2002.

The world premiere of The Judas Iscariot Lunch takes place at the Light House Cinema, Dublin at 6.30pm this Thursday, February 25 and will be shown on RTE at a later date.