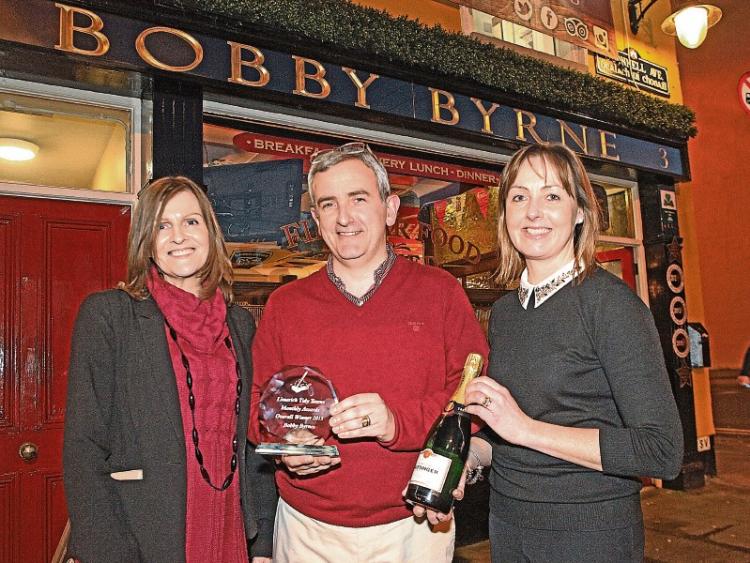 A POPULAR family city pub has won the overall Tidy Towns award for 2015.

Bobby Byrne Gastropub and Shop, based in O’Connell Avenue, won the Tidy Towns monthly award for March 2015 after inspectors were impressed with its “beautifully maintained exterior and traditional signage”.

Now, the company has beaten 11 other monthly winners to be named Tidy Towns business of the year at a special ceremony in the pub itself on Tuesday night this week.

At the end of 2015, Limerick Tidy Towns started a web poll of all the monthly award winners.

And of the more than 200 votes cast, Bobby Byrne’s emerged victorious with 125 people expressing their preference for the bar.

Proprietor Robert Byrne said he is delighted to win the prize – which includes a bottle of champagne and a specially designed trophy.

He said: “We are totally surprised. We are very proud of the business, we try to look it keeping as best as we can, which is not easy.”

Robert paid tribute to the other nominees, saying: “Everybody is a winner on something like this, because it is all about improving the look of the city and making Limerick City look better, and making it a welcoming place for tourists.”

And he also thanked the South Limerick City Residents Association – many of whom were in attendance at the awards ceremony – for doing a sterling job in keeping the O’Connell Avenue area clean and tidy.

“It is easy for us being a business to do our bit, to keep our place clean and tidy, and look after immediately outside. But they are looking after a much bigger area,” he said.

Sharon Slater, of Limerick Tidy Towns, said pubs are particularly important businesses, given they are often a focal point for tourists to the city.

“These are some of our most attractive buildings, particularly for visitors to the city. Both pub winners this year, being the Cuyrragower at Clancy’s Strand, who won in August, and the overall winner itself, Bobby Byrne’s are examples are some of our finest pubs.

“These are so important to Limerick as a whole as so many tourists and people from outside the city visit pubs more probably than any other business in the city, so to have them looking so well is a great reflection of the city as a whole,” she said.