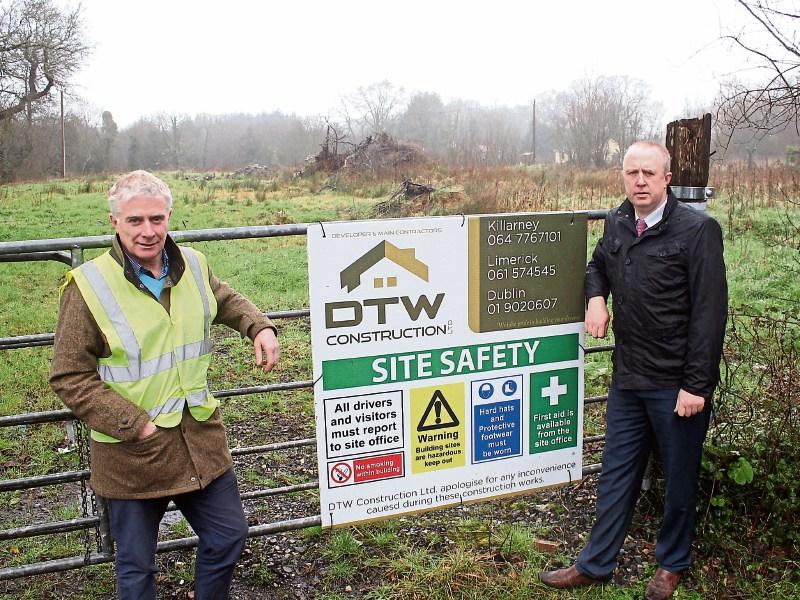 THE FIRST new development of houses in the county since the economic crash is to take place in Lacka, Castleconnell.

While a number of housing estates have been completed, and in some cases new phases added, they had already been started when the bubble burst.

The luxury development, entitled Oak Wood, will be a small cul-de-sac of six serviced sites on the outskirts of the village.

Two Castleconnell residents – Brian Lenehan and Tom Walsh, director of DTW Construction Ltd – came up with the idea from a chance conversation while they were fishing, and Lacca Developments was formed.

Mr Walsh said Mr Lenehan was unable to build the house of his dreams due to the local residency clause required with planning applications.

“Despite living in the village for some time, he failed to find a house that would suit his family’s long term needs. After years of frustration, he partnered up with DTW to guide it through the planning process, and develop the site.

“Despite many obstacles and challenges, the development is about to begin in the coming weeks. They are spacious sites of between 0.3 and 0.5 acres with all services in place. There are generous landscaped public spaces to give a real feeling of space and allow families to interact and play,” said Mr Walsh.

He says a major advantage of this development is that you do not need to meet the local residency requirements as the land is zoned serviced sites under the local area plan. Unlike buying a green field site you do not need to build or pay for the services to be brought to your site.

Mr Lenehan is going to build his home on one site and there has been a lot of enquiries in the other five.

“Even though the sites have only been on the market for the last week or so there is already a lot of ongoing negotiations,” said Mr Walsh.

Prospective buyers can choose a pre-designed spacious house by Limerick architect James Corbett or design their own dream home. Mr Walsh says this is a huge gap in the market.

“There are people out there who own existing houses and want to build the house of their dreams, design it themselves and build it on their own site. That isn’t possible in any of the suburbs of the city unless you go into a serviced site.

“If there are two or three children and the family wants extra room and space by designing a house that isn’t a standard three bedroom semi-detached, it isn’t an option for most people at the moment because of the pressures on the outskirts.

“Take Castleconnell alone. There is loads of land zoned for housing but it is all three bed semis. You need more land zoned for serviced sites on outskirts of villages where people can go and design what they want and build lovely spacious houses, put their own stamp on them and where you would have some space to rear your children,” said Mr Walsh.

He predicts there will be over 20 workers on site in Castleconnell giving local employment for the next two years.

This will be a boon to the local economy. Mr Walsh, too, is delighted to be back working in Ireland again following nearly five years spent travelling back and forth to London for work

“This is a good news story, and a sign that the economy is on a more stable footing. Unless there is a crash again we intend to say so long as the economy keeps on at an even keel,” he concludes.