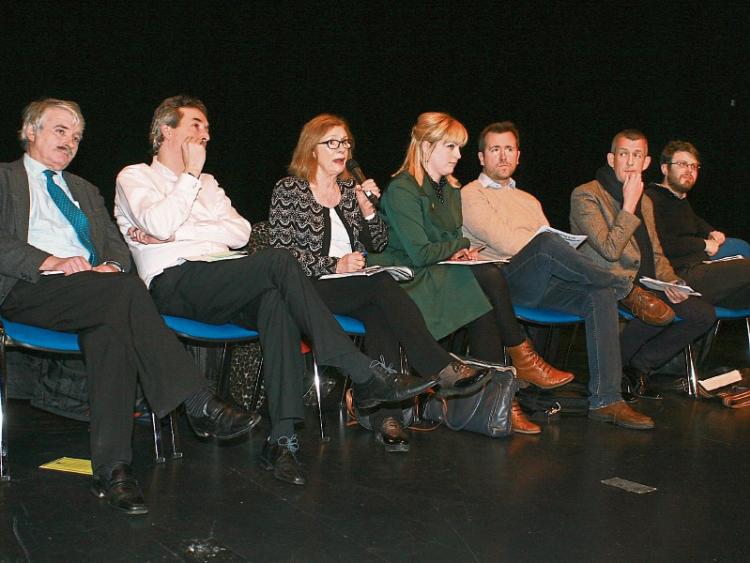 The candidates gathered at the National Campaign for the Arts hustings in the Belltable Picture: Adrian Butler

EDUCATION minister Jan O’Sullivan has called for “more transparency” in how the Arts Council allocates funding to regional groups.

The Labour TD was replying to a question from actor Liam O’Brien at a hustings in the Belltable, organised by the National Campaign for the Arts, to debate arts policy and what the candidates’ policies would be should they get elected.

Mr O’Brien pointed out that Limerick has not had a funded, professional theatre company since Island folded in 2008, and asked the candidates for the city constituency what they would do to rectify this situation.

“We want to double the funding to the Arts Council and I think we all value the independence of it,” said Minister O’Sullivan. “It is independent and rightly so, the money is given and then allocated, but I do think there is a problem of transparency, in terms of how it is allocated.

“I think there is a need to understand why money is given in such a sporadic way and why, suddenly a company for example that has been funded in whatever arts they are involved in, finds itself without funding.

“I think also we do need to see some kind of a regional approach, because there doesn’t seem to be a consistency about how money is allocated. And certainly theatre in Limerick has not been funded in a way that theatre has been funded in other parts of the country.”

This was one of several key points raised during the hustings, to which all of the city candidates were invited this Monday lunchtime. Organiser Deirdre Flynn, a lecturer in MIC, noted that Council of Europe data showed that in 2012, Ireland spent just 0.11% of GDP on the arts and culture, compared to a European average of 0.6%.

The Arts Council allocated close to €1.8m through its three main funding strands, rising to almost €1.85m through a number of other strands, for Limerick in 2016, yet the body has itself seen its own funding cut heavily over several years.

Each candidate was given three minutes to outline their policies for the arts before the debate ensued, and did so with vigour. All stressed the importance of the arts to the economy and community, with various proposals as to how to boost support and funding presented.

Interestingly, just two of the candidates – Jan O’Sullivan and Maurice Quinlivan – made reference to the fact that the Belltable had been re-opened and the name returned to use. There were also a number of passionate contributions from those in attendance.

Eleanor McSherry said that “not one of the candidates have come to the arts community – save for today”, while Lime Tree manager Louise Donlon expressed surprise at Sarah Jane Hennelly’s proposal to create “another quango” to manage arts funding. Ms Hennelly said the party was “open to ideas”, but was advocating for a “new advisory body” to be involved in the arts funding and management process.

Liam O’Brien stressed that, since Island’s demise, the Arts Council had funded just five full scale theatre productions in Limerick. Yet there was much praise for City of Culture and the effect it had on the city and the arts community, with hope expressed for the success of the 2020 bid.

Independent Des Hayes noted that that the Abbey Theatre used to tour to Limerick “every 12 months”.

“That was then and this is now. But a couple of years ago, some previous government – we won’t apportion any blame now – decided to carve up the arts,” he said.

Willie O’Dea said a “sustainable funding model for the region” needed to be found, while Ms Hennelly suggested looking to other countries and how they fund the arts.

Green Party candidate James Gaffney stressed that the arts community “was not looking for handouts, but it needs support” and advocated for long term planning on funding for the sector.

Speaking after the debate, Deirdre Flynn said: “We are not getting funded and we need the politicians and people who are representing us in government to know that this funding (situation) is happening, and what it means down here on the ground.

“Limerick is not getting what it deserves in relation to the funding that is coming out and this is something that needs to be hit home to the politicians that are supposed to represent us. And to make sure that we are funded on a national level and represented strongly at a national level.”

Asked if she hoped that the candidates had taken some of the issues discussed on board, she said: “I think some did. I think that maybe when they do come to the door, you can say ‘what’s your policy on this’ or ‘when is the funding going to come’ and maybe they will be ready for it and better informed when they do or do not get elected.

“I think it was interesting, there was a good turnout both from candidates and the local community and I think that is really, really important. Because I feel that people think it is not something that is appearing on their campaign leaflets, you are not getting stuff about the arts and it is a really important conversation, that people need to have,” she said.

While Michael Noonan had declined to attend, Kieran O’Donnell’s secretary had told Ms Flynn that there was “an election on this week" and could not attend as a result. Nora Bennis of the Christian Democrats had also indicated that she was unable to attend.

“I think it is telling that there was nobody here from Fine Gael, I think that is really, really disappointing,” said Deirdre. “Particularly as they are a party that probably feels they are going to get right back in there, so they don’t need to listen to our artists.

“Hopefully that will tell on the ballot sheet in Limerick and other places where these campaigns have been held, where they haven’t shown up or have been weaker in their policies.”

Barney Sheehan, who runs the popular White House Poetry Night, demanded to know of each candidate what their plan was for King John’s Castle and in particular, Nicholas Street, the “heart and soul of Limerick”, as he referred to it. Mr Sheehan has long campaigned on this issue and did not suffer equivocal responses from the candidates.

Maurice Quinlivan said he wanted to see Nicholas Street developed, shops opened and a proper link made between the Castle and Cathedral, while Cian Prendiville suggested that studio space for artists might be included in any prospective plans.