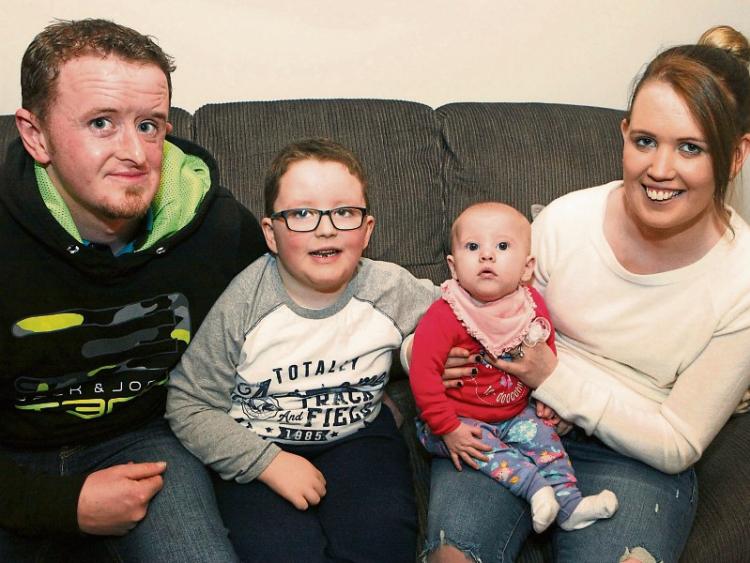 David, DJ, Pippa and Caroline Grimes pictured at their home in Brackvoan, Bruff. Below, his feet after surgery Pictures: Dave Gaynor

THE MOTHER of a five-year-old boy who was born with extra fingers and toes and who is expected to lose his sight by the time he is 10, has been waiting for a suitable home for her son for the past six years.

Bardet-Biedl syndrome is a recessive genetic disorder characterised by obesity, retinal degeneration, extra fingers and toes on the hands and feet, and intellectual impairment.

“When I got my three months scan I did notice an extra finger but they told me that it was in my head,” said Caroline Grimes, 27, who lives with her husband David, 28, and two children, DJ, and five month old Pippa, at Brackvoan estate in Bruff.

“When he came out it was exactly the same hand, his left hand, that had an extra finger.

“I had a section and I was knocked out. When I woke up they had David tell me that he had extra fingers and toes,” added Caroline who gave birth to DJ at the University Maternity Hospital in Limerick.

David’s cousin has Bardet-Biedl Syndrome so he was aware of the symptoms.

“David said, ‘he must have the syndrome because my cousin has it’,” Caroline explained.

DJ had his extra finger removed when he was three days old. 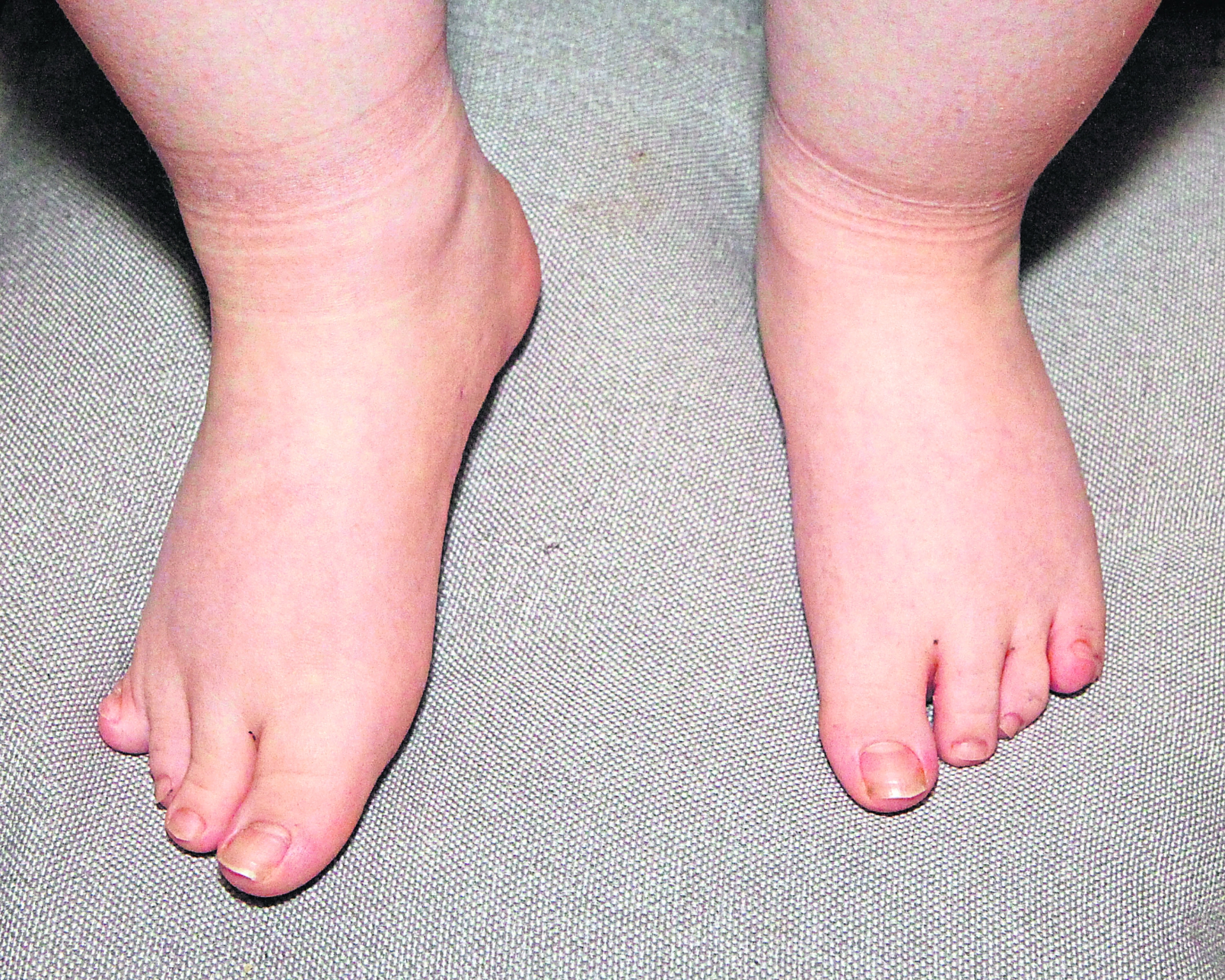 “It was like an extra baby finger,” Caroline explained.

He was born with six toes on both feet. His fourth and fifth toes were fused and his third toe on his left foot is curled.

“He had surgery in October 2011 on his feet. He was about 14 months. He got the last toe on each foot removed.  He still has the fused toes and the curled toes.”

DJ, who is in junior infants at Bruff National School,often experiences pain in his toes, and the condition of his feet makes it difficult for Caroline to get shoes to fit him properly.

“His two fused toes actually turn up so he complains about the pain in them. It’s very hard to find shoes to suit him. I always try to leave him with a bit of room because they need space.”

He has also experienced developmental delay and has very poor vision. Sadly, medics have predicted that he will be fully blind by the time he is 10.

“He has tunnel vision. As the doctors describe it - if you look into a toilet roll and you look through that circle - that’s all he can see. He has no peripheral vision.

“We were told that 50% of his sight was gone - that was in April and he wasn’t even five then. He was given another five years. We were told that we would ‘be lucky if that child is still seeing by the time he is 10’ and we were told to ‘go and put your life in order for him’.”

Caroline and David feel that the house they are currently living in at Brackvoan in Bruff is totally unsuitable for their son. They say they have been on the housing waiting list for the past six years.

“We are renting and we are not entitled to any adaptation of the house,” explained Caroline who is originally from Croom.

David who is originally from Cahernorry near Ballyneety works three days a week.

“I have the carer’s allowance and domiciliary but I’m on the road all the time with him, going to hospital appointments. We get rent supplement but now we have Pippa they want me to pay more money towards the rent.

“We are very confined here. DJ needs as much daylight as possible. He has to put on the light straight away when he comes in from school in this weather. If we were in a house that we could adapt then we could put on neon lines on every step. We need to be able to put certain things on the walls to be able to help him and change all the lights around the house.”

When asked if she is worried for her son’s future, the young mother broke down in tears.

“He doesn’t let life bother him,” she said. “Over the last few weeks his eyesight has deteriorated in his left eye but he wouldn’t tell you. After Christmas his behaviour changed and he would go closer to the television.  When his behaviour changes you know there is something up. He won’t tell you what’s wrong. He will be more emotional and won’t participate. He was putting on the lights earlier than he used to.”

The couple  have already lost a little girl, Kayla, to the syndrome.

“She died just 15 minutes after birth. I fell pregnant with her after we had DJ,” Caroline explained.

Pippa, who is five months old, is waiting to be tested for the syndrome.

“She is five weeks chesty. She has reflux and she is getting nose bleeds. We have alreadly spent five years in and out of hospital with DJ.”

Caroline has asked DJ’s medical professor if she should tell her son about losing his sight.

“I can’t tell him that,” said Caroline.

“I think he will probably come to us and say ‘I can’t see’. I think he will totally figure it out and question us as to what’s going on. He might go to turn on the light and the light will be on,” she said, fighting back the tears.