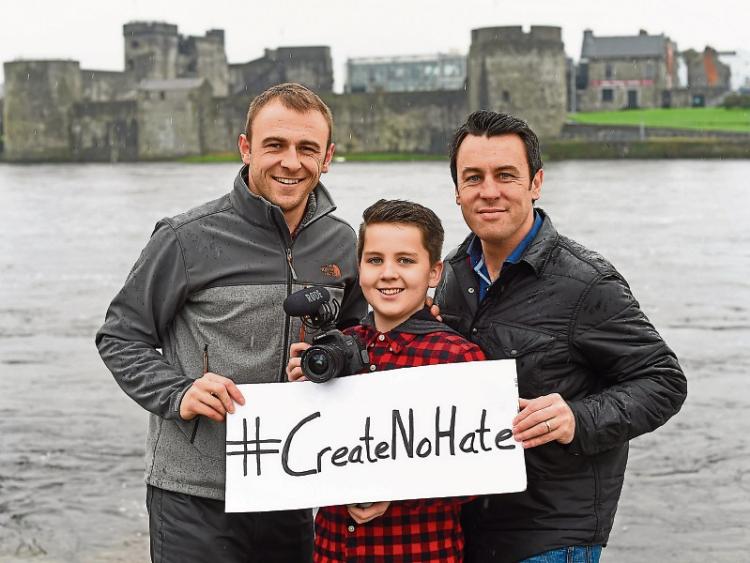 SKY News, BBC, MTV, FOX, RTE and UTV have all come calling, such is the power of one 13 year old Limerick boy’s anti-bullying message.

Luke Culhane, a first year Castletroy College Student, released the powerful video Create No Hate to take a stand against cyber-bullying, having been a victim himself.

Barely a week later, the video has racked up nearly 200,000 views on You Tube, the same again on Facebook, and Luke has become a focus for national and international media attention.

The idea, he says, was to make something that might help just one person suffering from the perils of cyber abuse, something he estimates all teenagers have either encountered or witnessed.

“I was cyber bullied myself and I wanted to help other people to deal with it,” said Luke.

The video, which was made over the course of a week with Luke’s Dad Dermot and cousin Diarmuid Greene, features the Castletroy lad himself, suffering physical scars from the cyber abuse.

“Cyber bullying affects real lives,” reads a message. “Stop, block, tell,” is another. “How would you feel?” it adds.

“Have you ever cyber bullied anyone,” asks Luke in the video. “Have you ever been cyber bullied? Have you ever witnessed cyber bullying? 100% of teenagers answer yes to at least one of those questions. That means everybody has a part to play to help stop this needless behaviour online. Play your part by using ‘stop, block, tell’.

“I wanted to show that, even though it is just virtual, it hurts people - that is why I put in the physical scars and with the bullying it hurts and over time it builds up,” Luke explained.

Of the reaction, Luke, a keen video blogger, said he “wasn't expecting it” and it is clear this is a growing issue among teenagers.

“It is common, it affects everyone,” he said. “When you put something on Facebook, the whole world can see it, so you have to kind of expect hate.”

Dermot Culhane says the family are “bursting with pride”.

“When he came to us about being cyber bullied, he really wanted to face it head on, he didn't want to hide - he wanted to know, ‘what can I do, how can I help other kids and raise awareness’?”

“All he wanted to do was help one other kid - if he could do that, it would be great. In a million years, we had no idea of the world wide impact that this would have.”

Luke released the powerful video online to mark Safer Internet Day just last week, after spending over 40 hours working on the project. Within days he was contacted by news outlets around the world.

Next up is a behind the scenes documentary, with plans for a website to spread the message even further.