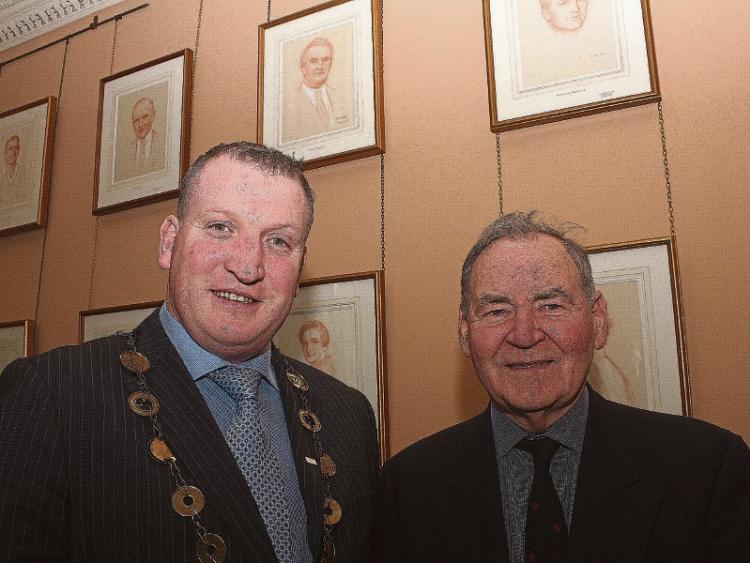 Dr Ryan and the BBC broadcaster were both conferred with the Freedom of Limerick in 2007, and both men also received honorary doctorates from the University of Limerick.

Dr Ryan’s series of portraits of 25 prominent Limerick people had previously hung for a number of years in the home of the Civic Trust, the Bishop’s Palace, but it has now moved to the Georgian House, also known as Culture House since its acquisition by the local authority, in Pery Square.

The 86-year-old Freeman of Limerick decided to move his collection, with the assistance of the local authority, after he felt he was dealt  a “considered, premeditated insult” by the board of Limerick Civic Trust, when the collection was moved to a less prominent location in the Bishop’s Palace in January of last year.

Mike Fitzpatrick, the director of Limerick’s 2020 bid, speaking in their hub in Culture House, said he is delighted that the collection now resides there and said “this is a great gift to Limerick”.

Mayor of Limerick Councillor Liam Galvin said the room fronting onto the People’s Park and in one of the most historic areas of Limerick, is a natural fit.

“Dr Ryan is one of Ireland’s greatest artists of this generation, and on behalf of the people of Limerick city and county, all we can say is ‘thank you’.

“This is beyond generous and it’s a fantastic gift, for the people of Limerick to be able to come in and look at these, especially anyone who is interested in art. It has come to a good end. We’ll treasure them, we’ll look after them, we’ll mind them,” said Mayor Galvin.

Pat Dowling, the deputy chief executive of Limerick City and County Council, said Dr Ryan is a “great son of Limerick, as well as being a world renowned artist and designer, and a friend to Limerick, beloved across the city and the county”.

“I think it’s fitting that they are now located here in Culture House, because when we become European Capital of Culture these will have even more significance, this being the centre of arts and culture for the city and the county,” said Mr Dowling.

Dr Ryan, who designed the fifty pence coin issued to commemorate the Dublin Millenium in 1988 and the £1 coin in 1990, presented the collection to the late Denis Leonard, the then chief executive and co-founder of the Trust, based on a verbal agreement between them. However, he felt his issues weren't respected by his successors.

The collection of Limerick’s famous sons – and daughters – includes former mayors Jim Kemmy and Ted Russell, the Garryowen rugby player Paddy Reid, who was part of the Grand Slam winning team of 1948, the artist Sean Keating, the opera singer Catherine Hayes, the writer Kate O’Brien, former minister Donough O’Malley, the actor Richard Harris, and many others.

Dr Ryan, of the Royal Hibernian Academy and its former president, said the paintings are ideal for this new home in the Georgian House.

The collection is open to the public to view.

Speaking in Culture House, under his own painting of Ted Russell, which he painted 50 years ago, Dr Ryan said a wide variety of Limerick life is featured in his portraits.

“They have been wonderfully settled and redeemed here. They fit beautifully here. Collectively they’re grand and they fill the room. Individually they’d look pretty thin and mean. I am very happy now about the whole thing,” he said.

“The council now own them, which the Trust didn’t, and I’m delighted they’re in the city’s possession. They are of no monetary value.”

The founding president of the University of Limerick, Dr Edward Walsh, is now the only surviving person out of the 25 featured in the collection.

“I'm delighted that Limerick has now formally recognised one of our most distinguished painters,” said Dr Walsh.

“He generously created paintings of some of Limerick's movers and shakers and I'm delighted that I've been included as one of them, and I've just been informed I'm the only one of the 20-something who is still alive, which is rather frightening. I'm glad that a distinguished Limerickman will be remembered for many centuries to come.”