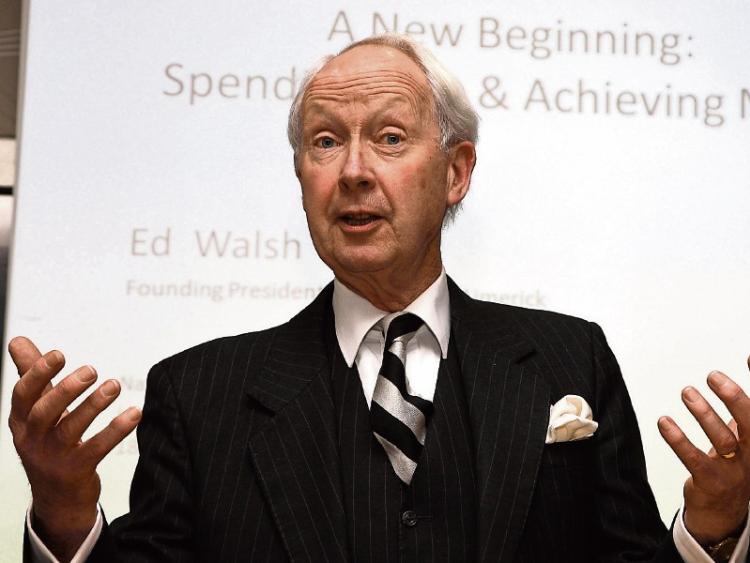 THE FOUNDING president of the University of Limerick has said he is “concerned” and “particularly sad” by the findings in a recent review, commissioned by the Higher Education Authority, into a number of allegations at the university.

Speaking to the Limerick Leader this week, Dr Edward Walsh, president emeritus, said: “I took a vow when I retired from the university, after leading it for 28 years, that I would decommission myself, so that those who succeed me can get on with the job.

“There are always difficulties and I am particularly sad to observe this one. I’ll leave it at that, but of course I’m concerned,” he said, at a civic function in the Georgian House, Pery Square this Wednesday.

Dr Walsh was asked in the first instance if he had read the report and the HEA’s subsequent statement on all matters, but would not be drawn further on his views.

Following concerns raised by three female whistleblowers  in relation to expenses and other financial matters, the HEA expressed a number of concerns regarding a lack of policies and procedures in place at UL. It also raised questions about HR practices at the university.

The HEA said that it believes that an investigation – as opposed to a review – should now take place, within the shortest possible time-frame, into “whether financial issues identified are indicative of wider practices within the institution when any such issues are raised”.

In response to further queries from the Limerick Leader regarding this investigation – such as when it would take place and who it would be conducted by – the HEA would only say that it will meet with management at the university next week to “discuss the report findings and recommendations and we remain committed to ensuring their full implementation”.

The review, conducted by independent consultants Mazars since last October, followed the the allegations of three female whistleblowers after their allegations were first revealed in the Limerick Leader.

That front-page report gave rise to Fianna Fail deputies Willie O’Dea and Niall Collins raising the cases of the three women in the Dail, and led to the review, which was published last week.

Both deputies have now said that they believe that the women are “totally vindicated” by the report’s findings.

Minister for Finance Michael Noonan has also said that he cannot see how UL could proceed with its legal action in the High Court against the Limerick Leader and its editor, Alan English, for publishing the initial newspaper report, based on the findings and lengthy list of recommendations for UL in the review.

The report states that instances of irregular claims by staff occurred in the university, but were properly challenged by the employees concerned, and no inappropriate payments were made.

But the HEA expressed concerns that “there may have been or may still be a culture of inappropriate claims being made, until challenged”.

UL rejected this assertion, describing it as “offensive to past and present staff of the university”.

One of the three women, who has since left UL, brought instances of her claims to the Public Accounts Committee in 2012, but felt they “fell on deaf ears”. They were not made public at that time.

The two other women remain suspended by the university some nine months on.

This week, a UL spokesperson again reiterated their stance that they cannot comment on employment matters, and would also not comment on whether the institution is still proceedings with its legal action.

UL said it welcomed Mazars’ recommendations and is in the process of implementing them.