Tributes paid in Limerick to mum of triplets who died suddenly 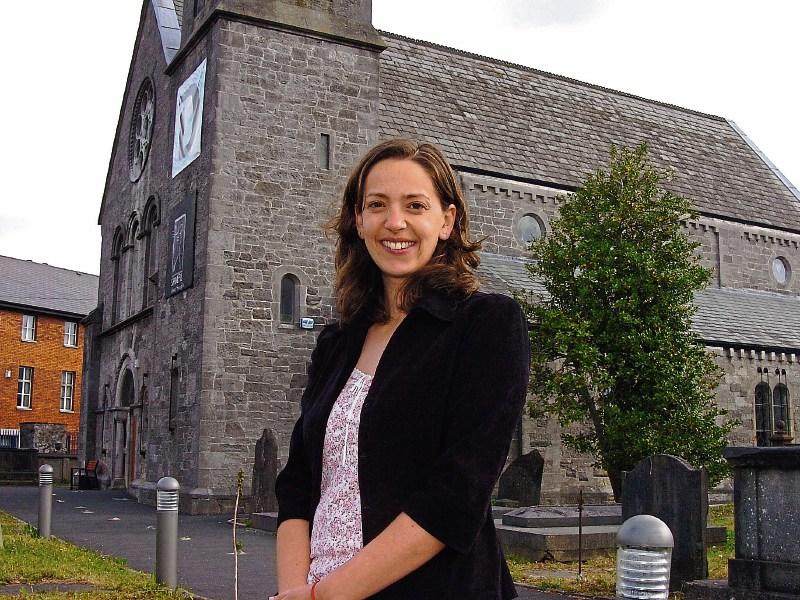 Gemma Carcaterra pictured outside St John's Church, where Daghdha was based

TRIBUTES have been paid in Limerick to Gemma Carcaterra, a mother of five-month old triplets, and director of Glor in Ennis, who passed away suddenly while on maternity leave.

The 42 year-old was formerly director of the now defunct Daghda Dance Company, which was based at St John’s Church in the city. Ms Carcaterra was also a founding member of the Tri-Hards running group, based in Limerick.

She was rushed to University Hospital Limerick after becoming ill and died on Thursday.

Minister for Education and Skills Jan O'Sullivan said Gemma, who lived in Killaloe, "was a wonderful warm committed woman" and said her death will be a "huge loss to her family and the Clare and Limerick community”.

Her funeral mass will be held today in St Mary's Church, Ogonnelloe, at 12 noon, followed by a private cremation afterwards.

Funds are now being raised to help support her devastated family, including husband Colm Clarke, and children - two identical twin girls, Ava and RÍona, and her son Coen.

Nearly €3,000 has now been raised through an online fund.

Her friends in the TriHards running group in Limerick city were among those who paid tribute to her over the weekend, following her sudden death.

"All of us, who were lucky enough to call this extraordinary lady and bright ray of sunshine our friend, are devastated by her untimely passing.

"Gemma's energy and positivity was infectious, she was always smiling and her sunny disposition was reflected in her trademark bright running gear.

"Her beloved 'leggy ladies', who she ran with regularly, will especially miss her - the motivation on long runs, the chats, the laughs, the coffees after training but mostly her warm, friendly face and love for life. We were all so privileged to call her our friend," they said.

A native of Wolverhampton in England, she took up the post at Glór in October 2011. As a mark of respect, the Valentine's event in Glor was cancelled yesterday.

Christy Moore played in Glor on Friday night and dedicated Nancy Spain in her memory as it was one of Gemma’s favourite songs.

In a statement, Glor said: "It is with deep regret and sadness that the staff and board at glór, Ennis, announce the untimely death of Gemma Carcaterra, who has served as Director since October 2011.

"We extend our deepest sympathies to Gemma’s husband Colm, her three children Ava, Ríona and Coen, to her parents Rosa and Rob and her brother James."

Ms Carcaterra’s sudden passing caused shock among those working in the arts community in Limerick and she was remembered in recent days as “popular and hardworking” for her time at Daghdha, which closed in March 2011.

She was in charge of the dance company for nearly four years from August 2007.

Louise Donlon, theatre manager of the Lime Tree Theatre in Limerick, said staff were completely taken aback by the news, which she described as "devastating".

"Gemma was really one of the most engaging, warm, bubbly personalities. We're really just completely taken aback and devastated by it. It's just awful news. She has been in Limerick for over 10 years, working in Daghda and then in Glor. We had a lot of contact with her. She's going to be a huge loss, to her family and to us as well. We are really devastated," said Ms Donlon.

The board, management and staff of the University Concert Hall also wished to extend its sincerest sympathies to her family, friends and colleagues.

Her friends who set up the fund said "she was a very inspirational woman and such an amazing mother, even if it was for such a little time".

"We would like to give this gesture of support to her family to pay a small tribute to her and her life. They may go on to donate the money to a good cause or maybe use it another way that they know would make Gemma very happy," they wrote.

To make a donation in Gemma's memory see https://www.gofundme.com/svggqstm

She is also survived by her parents Rosa and Rob, and her brother James.