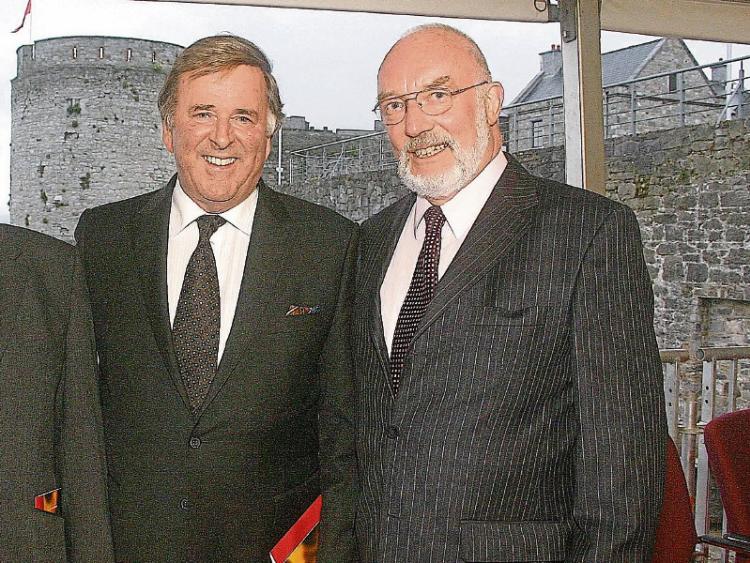 Sir Terry Wogan with his great childhood friend Jim Sexton n 2007, when Terry was given the Freedom of Limerick

This is a letter that was never on my list of things to do. But now that you have slipped away without any real warning to most of us, your absence compels recall of your presence in my life all those years ago, for a short eight or nine years, until you left Limerick and the Crescent and went to Dublin and Belvedere, following your Dad’s promotion from Limerick manager to national manager of Leverett & Frye.

Others who knew you much better and in your later emerging and full flowering of life will write and speak in detail of your many accomplishments – in which your fellow Limerick men and women will take due and proper vicarious pride – but here I want simply to recall some of our shared events between the ages of six and 15.

You and I were first in school together with the kindly and attentive Salesian Sisters in Fernbank on the North Circular Road, only a few hundred yards from both of our homes. We lived just around the corner from each other. Do you remember the most severe sanction the Sisters devised for persistent talking in class? A boy would be made to sit beside a girl – to the total embarrassment of both! Times have changed.

From the Salesians, we went on to the Crescent College, a boys only school then, at the top of O’Connell Street . Most of us who went there would spend the entire 10 years from age 8 to 18 there, and you would have if you hadn’t moved.

Even from our Salesian days, I remember that you were very good at reading. We both liked to read and I’m sure it was your mother who nourished this habit in you and your brother Brian, and mine did with us. There were some other boys in the Salesians who shared this reading habit – you will remember Finbar Sheahan and Billy Hayes.

We progressed from Enid Blyton through Tales of the Fianna and Irish legends, on through the Just William stories of Richmal Crompton, The Wind in the Willows and later on to the Biggles and other war-time stories – this was still the late Forties and while we had had no war in Ireland our young imaginations were fired with the spirit of adventure.

Your reading progressed more thoughtfully than mine, and you read more serious stuff. I remember talking as we lay stretched out on your dining room floor around the outspread Subbuteo table soccer pitch, and I’d be very impressed with your learning.

Subbuteo was a major passion, and we got great fun out of it. Your teams were Wolves and Blackpool – do you recall how you’d flick the great Billy Wright to save Wolves from his centre-half position, or how often Stan Mortensen and Stanley Matthews would dribble and centre the ball to work a pure magic goal for Blackpool? You’d often add a pitter-patter commentary that I am quite sure was designed to bamboozle your opponents as much as the football skills.

It was a great social game and we would travel to friends’ houses as far away as Lansdowne Park and O’Connell Avenue to play league games: Billy Hayes was in Lansdowne, and John Horgan and Don McCarthy were in O’Connell Avenue. You were a class Subbuteo act – and always played to win! There was of course no TV or picture coverage of English football, but there was the radio and I think you listened to the BBC, which is where you probably got the names of the players and the teams and the other details.

None of us had much money, and our books were borrowed from the school or the city library. My weekly income was a tanner (6d) and I imagine your pocket money was around the same. Our Dads would bring home a selection of comics on Thursday or Friday, which we’d swap – all English ones of course. There was nothing else.

And do you remember our gang? We were in the same gang as eight- and nine-year-olds and regularly had to defend our fort (the garage at the end of our garden backing on to Elm Park) against the attackers – while the common weapons were bows and arrows made from sallies we cut down by Barrington’s Pier, beside the river. All was OK, but when one of the attackers got hold of his older brother’s airgun there was a significant change in the balance of power. I fell off the garden wall and broke my front tooth in an attempt to avoid being shot, and I think that your mother and mine decided that there was enough of this war stuff and imposed a peace, or at least a ceasefire.

Growing on to 11, 12 and 13, these activities gave way to rugby and tennis, principally. Around 14, we played for the school for the first time, and we made the Junior Cup team by the age of 15. Do you remember the honour of being picked to play in the all-white gear which was the school colours – balanced by the grief our mothers experienced when they had to wash it weekly without benefit of a washing machine!

We played tennis throughout the summer. Your Dad many years later laughingly took me to account, blaming me for marring your beauty when you broke your front tooth with your racquet trying to answer a nasty shot from me – he said I’d forced you to break it!

Despite having very little money, we did enjoy a pretty privileged life in those days. I know there was corporal punishment and each of us got a share of that. Not all the teachers were wonderful, and we’d sometimes be apprehensive coming into class if we hadn’t done our homework properly – but vision, insight, competence and care seem to me to be at least as rarely displayed in the education system today as they were then.

I think our schooldays with the J’s were happy days, by and large, and listening to your comments on TV and radio from time to time I think you probably agree with that.

On summer Sundays we’d all go on a cycling picnic with one of the scholastics from the school (young teachers in training for the priesthood) and these were great – cycling to Doonass, Carrigogunnell, Tinnerana, Clare Glens and so on.

And do you remember the famous boat trip for altar boys down the Shannon, when the boat got stuck in the mud on the return journey in mid-river in the evening, and we had to wait for the tide to rise to float us off? And all our parents standing in frantic waiting on the docks in Limerick until we arrived home at one or two in the morning? One of our scholastics on that day was Dick Coyne, and I remember he waded from the boat through the mud over to Barrington’s Pier to walk into town to tell the school and the parents what was happening – oh for a mobile phone! We all thought it was a terrific adventure!

I don’t think we were a dumb bunch in our class – but I am pretty sure none of us could have guessed the direction you would take with your life. Much less, how you would, in a quiet but consistent way, grow to be not merely a giant in your chosen way of life, not merely enthral and become treasured by the British (and I think especially the English) people, without alienating your own native Irish fellow country men and women. Eight million listeners daily over decades hung on your endless word-weave blend of humour, humanity, respect and obvious delight in their company.

I didn’t often meet with you after you left Limerick, but when we did meet on the occasions of your visits to receive some award or recognition from the proud citizens of your native city, you remained the same person, still “plain, old Terry” as you said of yourself, at ease among us. That quality is something that is a natural attribute of a great person. And we did and do appreciate it.

Neil George of the BBC phoned me the other day to ask me to take part in a programme they are to present about you, and he asked me – “Do you in Ireland have any idea how big Sir Terry is over here?” The question brought it home to me that maybe we don’t really, but what we do know is that you have done us all proud.

Especially, perhaps, your being who and where and as you were during the IRA bombing campaign in Britain clearly wrought a singular and magnificent service for the tens of thousands of Irish people living and working in Britain at that time, when an anti-Irish virus could surely have worked its infection on the populace; and there is no knowing the ripple or knock-on effect, even to this day, of your remaining publicly and persistently present and true to the values shared by all Irish and British people of good will.

Dear old pal – I could write on and say so much more - but that will have to await our next meeting! In the meantime, I will sit down and savour the memories, admire and wonder at the achievements, and notice the presence of your absence.

I extend my deepest sympathy to Helen and your family on their inexpressible loss – and hope and pray that your imperishable legacy to them and the huge expressions of support from so many will provide them with the support and strength they need now.

I do believe that we will meet again – so I’ll just say au revoir, Godspeed and farewell.