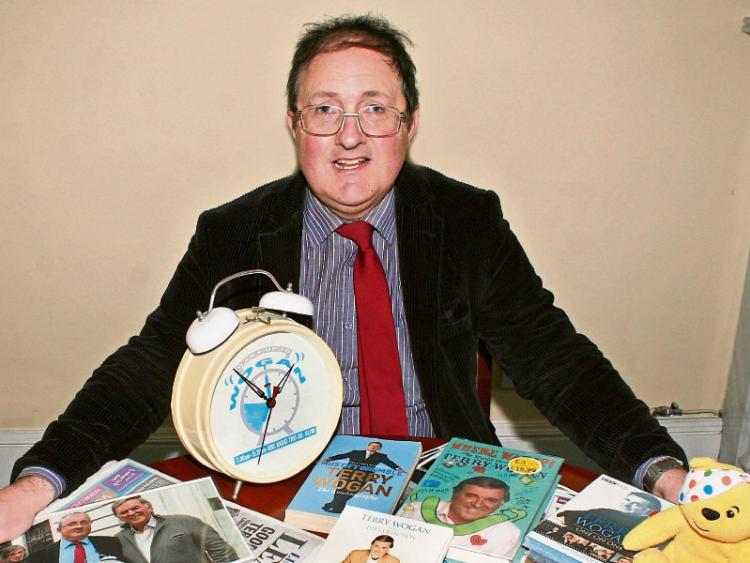 Clarina man Michael Potter, a huge fan of Terry Wogan, with some of his memorabilia this week: 'I always found him the very same as you see on the television' Picture: Adrian Butler

NOT many people can say they have met their hero on multiple occasions –  let alone spent 45 minutes interviewing them.

But Clarina man Michael Potter has had that very honour, greeting the late Terry Wogan outside BBC Broadcasting House in London – and also chatting with him for West Limerick 102 back in 2007.

Michael has long admired the celebrated presenter, who sadly passed away this week, from early childhood listening to him on the wireless surrounded by family to laughing at his barbed commentary during the Eurovision Song Contest.

And so, after taking on a voluntary job as a presenter at the community radio station, Michael “aimed high” as he put it, and made contact with Mr Wogan in the faint hope of an interview.

He was delighted when the star – who at the time was presenting a daily show to millions of listeners on BBC Radio Two –  accepted the invite.

“I had done interviews with Dana, and I also interviewed Fr Brian D’Arcy, both of whom were good friends [of Terry Wogan]. So I wrote off to the BBC in London in July 2007,” Michael recalled.

And he was delighted to receive a personally signed letter of acceptance from Mr Wogan, who agreed to take part in the interview on West Limerick 102.

Good as his word, Terry took a call from Michael, and chatted with him for the best part of an hour.

Michael recalled:  “It was amazing actually. I could not believe it when I put on the headphones, and heard ‘Hello, this is Terry’. After all these years listening to him, and suddenly I was talking to him – I was a bit wobbly actually! But he was so reassuring.”

Over the course of the interview, the pair chatted about every subject under the sun, also playing some of Terry’s favourite tracks.

Michael has built up a treasure trove of Terry Wogan memorabilia over the last few years, including the Wake up to Wogan clock, a feature of his signature breakfast show, as well as signed books and DVDs.

After interviewing him on West Limerick 102, Michael journeyed on a number of occasions to London to see the legend’s show live.

“I always found him in reality the very same as you see him on the television. Very jovial, very bubbly, very polite. I think all the media over the last few days have suggested that in real life, he was just how you saw him on the television or heard him on the radio. There was nothing put on. He was a very nice man. He would always make time for you.”

The last time the pair met was in late 2014 when Michael presented him with a copy of his brother Dr Matthew Potter’s book, the Curious Tale of the Limerick, and the latest edition of this newspaper.