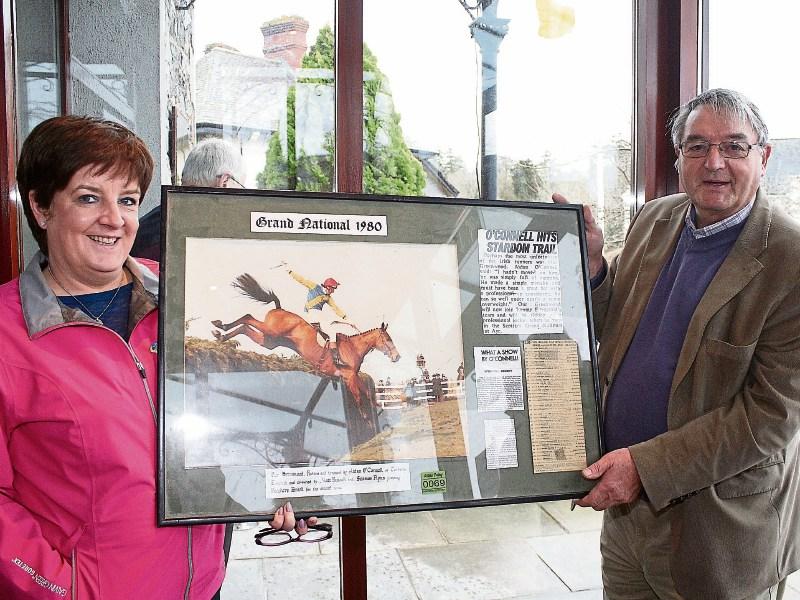 ON THURSDAY last, it wasn’t the cut-glass crystal, or a chandelier, or the baby grand piano that Adare man Robert Ruttle was after. Instead, he had his eye on some more modest items, with bucketloads of history and for a fraction of the price.

Robert, whose family worked in the five-star hotel many years ago before it reached Conde Nast fame, walked out with two framed items under his arm, for the princely sum of €70.

Among them was a framed front page of the Limerick Chronicle, sister newspaper of the Limerick Leader, from February 1965, about employment in the tobacco industry in Adare.

The second was a framed action picture of three-time Grand National jockey Aidan O’Connell, from Corbally. It was taken during the famously testing race in 1980, when just four horses finished. O’Connell, a real local character, was the heaviest jockey in the field, at 11 stone 6, and Our Greenwood was 100-1 with the bookies.

The going was against them, in a manner of speaking, but the legend of what might have been lives on.

“I just wanted to buy something that was related to the hotel, because some of my ancestors had worked on the estate and in building the Manor. It took 40 years to build, you know. The two of them were together, so I had to buy the two of them,” he said with a laugh.

“Aidan was going very well, but he made a mistake and that was the end of it. I’m very happy with the price, seeing what a lot of stuff is going for,” he told us. He expects that he might give that item a good home in the Cuchulainn bar in Patrickswell, which has its own associations with Aintree.

Mary Staff, Pallaskenry, and Joan Hayes, Kildimo, were eyeing up a number of items in the Manor, as the auction went ahead. They were after “a nice chair, or something with a Manor written on it, just a token”.

Michelle Keane Darcy, an interior designer from Knocknagoshel, got Christmas wreaths and an allotment of martini glasses.

“I got a great bargain there, about 50 glasses for €20. I’d love the grand piano tomorrow [it went on sale on Friday], but I think it’ll go crazy, or the banqueting gold chairs. If I was JP McManus, I would have held on to the stag heads, but I think a lot is going to be modernised,” she said.

There was no signs of any recession in Adare on Thursday and Friday, as staff flung open the doors of its golf clubhouse to host the auction of its interiors and exteriors, before it completes a major refurbishment estimated to cost over €30m.

There was standing room only, and bidding was fast and frenzied under auctioneer Aidan Foley, of Irish Country Home, with the prices fetched for some items raising more than a few eyebrows.

Several consignments of items are now being shipped to America, the UK and France, including silverware which is being dispatched to London – along with a number of bicycles.

Mr Foley, who also handled the sale of the Ashford Castle’s contents before its refurbishment, said the auction “made just a bit over” what was anticipated, but remained tight-lipped on the final number.

Tallies by the Limerick Leader show that that 1,700-odd lots went for €383,281, though it was speculated by numerous people that ‘withdrawn’ items had been sold prior to the auction.

Several staff members at the Manor – who have now been let go – were also keeping their counsel under the increasingly tight ship managed at Adare. Asked about their how they had enjoyed their years of service there, one lady would only reply: “Brilliant”.

A spokesperson for Adare Manor said they “looked at a range of options” with staff regarding their employment over the next 18 months, when the refurbishment will take place prior to hosting the JP McManus Pro-Am in 2018.

“We discussed these with staff on a case by case basis, some included relocation, redeployment, career breaks, parental leave and voluntary severance package.  I am afraid we cannot share any numbers. A number of staff are also taking the opportunity to further their experience and others furthering their education and upskill in the area of hotel management,” said the spokesperson.

Throughout the refurbishment and development phase, they also envisage that approximately 300 people will be employed by the contractors, and post development, staff numbers will rise to over 300, from its previous level of around 180.

Among the lots to sell on day one was a late Victorian pitch pine kitchen table, with a guide of €200 to €400. “You won’t see another one like it again,” enticed Mr Foley from the top table. The hammer finally came down at €820.

Over 5,000 people came to view the auction lots on Tuesday and Wednesday last, and in all, there were over 1,100 registered to bid from all over the world.

Dotted around the clubhouse were huddled groups, examining the brochure and keeping a eye on the TV at the same time, as the bids came through.

“I heard Donald Trump is buying the whole lot,” laughed one farmer from Clare.

“I’m not here for anything in particular myself, but it was a wet day, so I said I’d come in.

“I might try my hand at those stainless steel tables later in the day, but everything is going for mad money – mad altogether.”