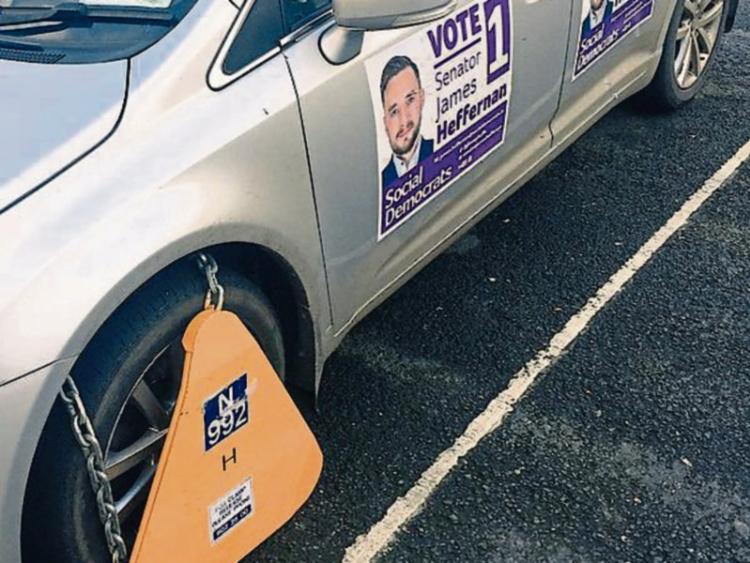 The clamp on the wheel of Senator Heffernan’s car

HE may have hit the ground running at the launch of his election campaign but Senator James Heffernan’s election roadshow was brought to an abrupt halt when his car was clamped outside Leinster House.

The Social Democrats candidate was “fit to puke” when he turned onto Merrion Square in Dublin at 7.30am on Monday to discover the “scuttering yellow” clamp on his car.

“I parked there on Sunday night and tried to buy a couple of hours for Monday morning but it wouldn’t allow me to. The parking regulations had been in since 7am,” explained the Kilfinane man, who had to pay out €80 to get the clamp removed.

Being a nice fresh morning, Mr Heffernan decided that he would bring the little puppy he has been caring for with him - and, as things turned out, Biscuit, a mini Jack Russell, made it inside Leinster House without even running in the election!

“I think guide dogs are allowed in but this little fella could hide under my coat. It was a non-sitting day but there was a meeting of the British Irish inter-parliamentary body so there was a lot of House of Lords types.

“They saw me with a North Face jacket, a hoodie, a pair of jeans and a little Jack Russell peering out from under my coat, I think they were wondering ‘what kind of a parliament is this Irish parliament?’”