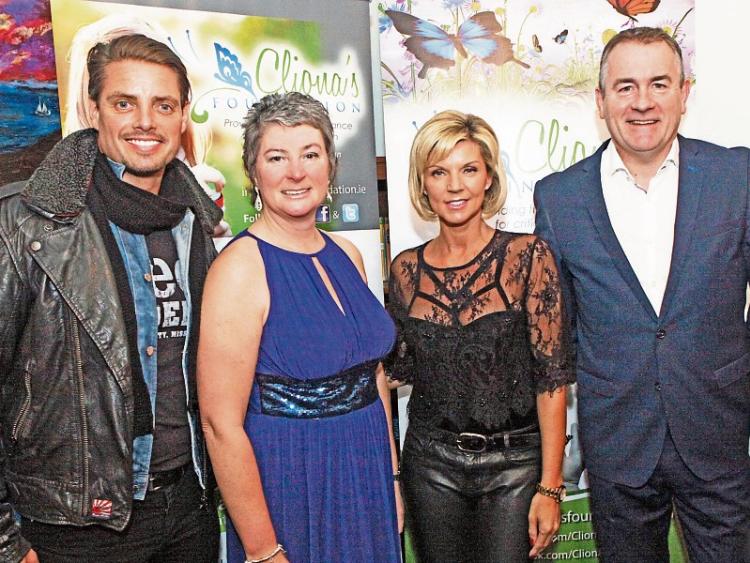 THERE was big cause for celebration at the recent ninth annual Cliona’s Foundation celebratory evening in Limerick which broke the €1 million mark for funds raised for families of critically ill children.

In 2007, Terry and Brendan Ring from Lough Gur founded Cliona’s Foundation following the death of their daughter Cliona in 2006, who died from an inoperable brain tumour.

Terry and Brendan established Cliona’s Foundation as a non-profit Irish charity to help keep Cliona’s memory alive by helping families with a child suffering from a life threatening illness.

One night each year, family, friends and members of the wider community come together to celebrate Cliona’s life and to reflect on their achievements over the past year.

This year the special guest at Bulgaden Castle was Coronation Street and Boyzone star Keith Duffy who has now set up his own charitable foundation.

“It was an excellent night - really good and well supported. Keith Duffy was amazing. He is incredibly supportive,” said Brendan Ring.

“He came down with his wife Lisa. He is currently rehearsing for a play in Dublin, Big Maggie. He was at rehearsals, left them, came down to us and went back to Dublin straight afterwards.”

During the event which was attended by upwards on 300 people including Brid Madigan, the Scotland Rose, the actor and singer mingled with guests - chatting, and posing for selfies.

One of the highlights of the evening was the huge number of top-class prizes up for grabs.

Fergal Deegan of Limerick’s Live 95fm won a voucher worth €1,000 for the Crescent Shopping Centre while a voucher valued at €1,000 for Brown Thomas was won by David Ryan from Knocklong.

Jean Tierney of Lough Gur won the door prize of Justin Bieber tickets  and there was also a very special prize for the family who brought the amount of funds raised to the €1m mark.

“We were very close to reaching €1m in funding so we kept an eye on the door and then that €20 ticket brought us over the €1 million mark so there was prize.

“When that family came in we identified them. Keith had organised tickets for Big Maggie and accommodation in Dublin for that family who turned out to be John and Valerie Riordan from Bruff and their children.”

Nighfall provided the music and Tom Tierney, chairman was MC for the night.

“I would like to thank our committee. Next year for our 10th celebration we are inviting back all our guests over the last 10 years,” said Brendan.

On March 26 the Sparkle and Shine Easter Ball in association with Keith Duffy Foundation takes place in the Strand Hotel, Limerick. Cliona’s Foundation are the nominated charity along with the Mid Western Cancer Foundation and the Symptomatic Breast Unit at University Hospital Limerick.