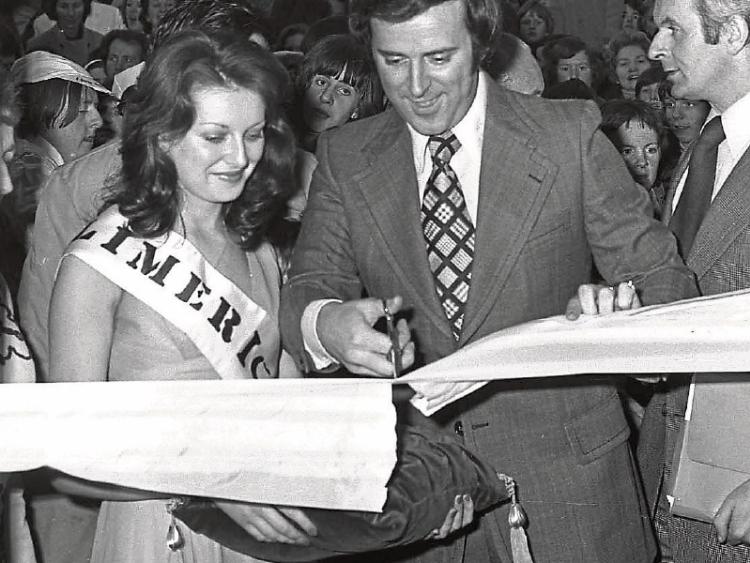 Terry Wogan cutting the ribbon at the Hypermarket furniture store on the Ennis Road in 1974, when he was already a huge star in the UK. Below, with then Mayor Joe Leddin in 2007

TERRY Wogan once said: “Limerick never left me; whatever it is, my identity is Limerick. I am so pleased that I am from Limerick.”

Michael Terence Wogan was born in the city in 1938 and spent his formative years at 18 Elm Park on the Ennis Road, attending Crescent College. He would leave Limerick as a teenager when his father – who was manager of the Limerick branch of the Leverett and Frye grocery store on O’Connell Street – received a promotion and Terry finished his education at  Belvedere College.

After a brief career in banking, Wogan joined RTE and would later use that move to leapfrog to the UK, going on to have a 50-year career at the very upper echelons of British broadcasting at the BBC, on radio and television.

But, while he spent most of his adult life in the UK, he never forgot his roots and his native city and in 2014 penned an ode to Limerick through the verse that bears the city’s name: “Friendship is Limerick’s style, we invite you to stay a while; Share our town, our history, Treaty Stone and our courtesy, I promise, you’ll leave with a smile.”

While his visits to Limerick were relatively rare, he would return sporadically to visit old school friends. In an interview with Helen Buckley of the Limerick Leader in 1989 to mark the paper’s centenary, he remembered: “We used to live in Elm Park and I remember it as a rather long avenue, with a huge wall at the end. Whenever I go by now, its a small little cul-de-sac with a ten foot wall at the end. That’s the difference between growing up and being young, everything seems much smaller when you go back.”

Demonstrating his trademark wit, he recalled judging the Queen of Limerick festival. “Yes, Fanny Condell was the Mayoress at the time. I remember it clearly. You could never just pick the prettiest. She had to have qualities above and beyond. This poor girl came in saying that she had read the papers from cover to cover. ‘Could you tell me, what’s the capital of France? It’s on the tip of my tongue,” she said. “It begins with a P. Is it Portugal?” she asked’.”

The broadcaster was, former Mayor of Limerick Cllr Joe Leddin remembers, “always at the end of the phone” when needed to help out with the promotion of his city.

Wogan was also quick to defend Limerick, telling people to “stand up and be proud” of the city when it was facing darker times. He said that he would “take on all comers who sought to denigrate his native city”.

When asked what it was that made Limerick so special to him, he said that it was “the character of the people”, as epitomised by the “Thomond Park spirit”.

“You never give up, you never say die and you are never beaten. You are prepared to have a laugh and when the game is over, you shake hands.

“My message to Limerick is: have a lot of confidence, get on with it. If Limerick’s estimate of itself is strong, then in a very, very short time the rest of Ireland and the world will take Limerick at its own valuation.”

Terry was ‘always there when Limerick needed him’

The Labour councillor conferred the honour of freedom of the city on one of Limerick’s most favourite sons at a ceremony on June 15, 2007. 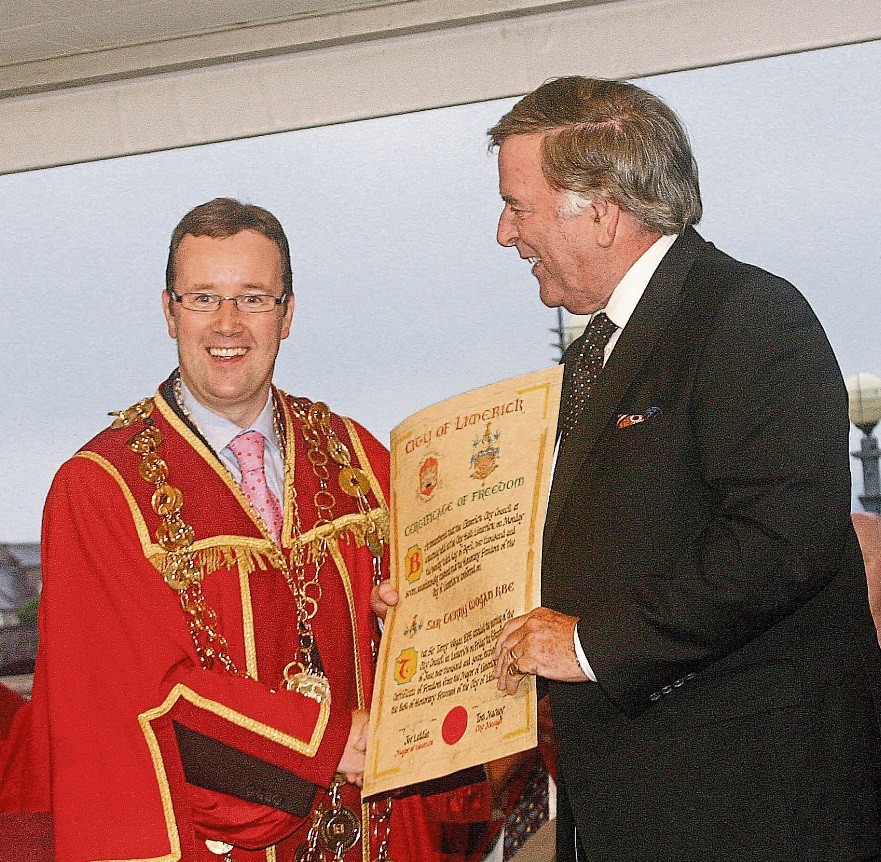 High winds in Heathrow had actually threatened to cancel the ceremony. When he eventually arrived, several hours late and full of apologies, Wogan declined a garda escort from Shannon, saying with his trademark wit: “There is no need for a police escort, I think I am safe enough in Limerick.”

He later attended the Mayor’s Ball in 2012 on condition there was no red carpet rolled out in his honour. Cllr Leddin said the broadcaster was “genuinely humbled I think at getting the honour, particularly from his native city” when made a freeman of the city five years before.

Cllr Leddin said that when the city was “going through a tough time”, Wogan was “always there to help various different promotional and marketing campaigns”.

“Apart from the fact that he was born in Limerick, he had reached the pinnacle of his career in terms of being a well known national and international broadcaster and he had made a huge contribution in that area. So I felt it was only fitting that the city and the council, on behalf of the people of limerick, should recognise that,” said Joe.

“He has left a huge legacy there and I am just delighted from a Limerick point of view that he was always there when the city needed him, despite the fact that he spent most of his career in the UK, he never forgot Limerick.”

Terry Wogan’s long time friend Fr Brian Darcy revealed: “The centre of his life was his family. If you go into his house, you won’t see a picture of any star, you will see a picture of his children and grandchildren, festooned around the walls. You will also see a picture of the certificate that he got of the Freedom of Limerick - that is there.”