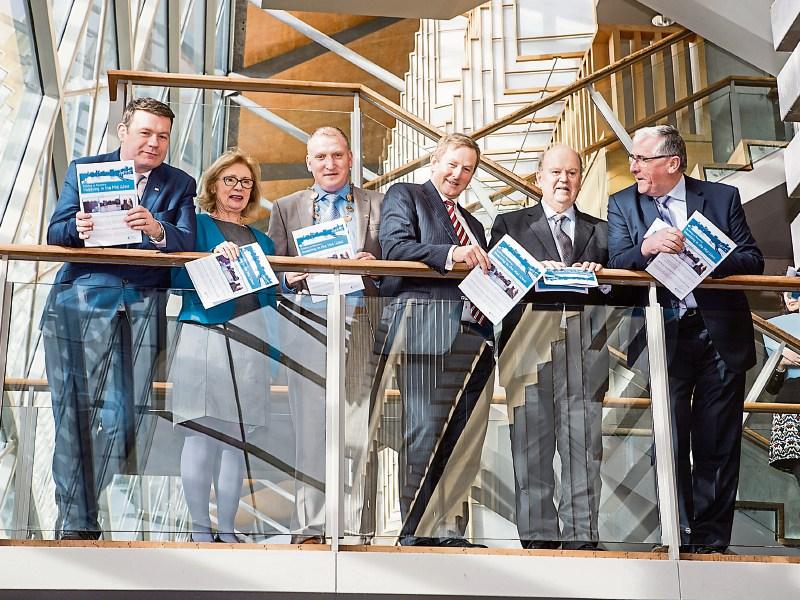 TAOISEACH Enda Kenny and a host of ministers have unveiled plans for capital investment in the Mid-West at an event in Limerick City and County Council’s chambers in Dooradoyle.

Mr Kenny, who was in Limerick to launch Fine Gael’s Limerick county campaign – for an election that has yet to be called – visited county hall with finance minister Michael Noonan, education minister Jan O’Sullivan, environment minister Alan Kelly and minister of state Tom Hayes, plus Mayor of Limerick Cllr Liam Galvin, to launch Building on Recovery: Investing in the Mid West.

Specific details relating to Limerick have already been outlined in recent days and weeks and variously include €2m for a new central library in the city, a major redevelopment plan for O’Connell Street, the redevelopment of Colbert Station and some €12.8m in grants to be spent on roads and infrastructure across Limerick.

Minister Noonan said of the plan: “We are very pleased that there is both investment in social infrastructure and economic infrastructure, because they raise living standards for the community but as well as that they increase the growth of the economy."

A total of €6.2m is to be spent on improvement of roads, while €1.7m is to be sunk into their maintenance, with a discretionary grant of €2.8m.

While the use for the majority of the funding has not been identified – that will be a matter for Limerick City and County Council – a number of projects have been earmarked.

West Limerick’s roads and bridges are in for a massive boost, with 15 projects to receive funding.

These include bridge rehabilitation works at Shanid Lower in Shanagolden, Knockdown in Athea and Don Bosco in Pallaskenry. These three projects will in total cost €65,000.

Some €35,000 has been allocated to other bridge rehabilitation works will take place at the White River Bridge in Carrigkerry, while the bridge over the River Deel in Askeaton town is to have €15,000 worth of works.

In Rathkeale, a bridges at Rathnasaet Road and Cloncash Road are to share in funding of €37,000.

A bridge at the Ballysteen Road in Askeaton is to be rehabilitated at a cost of some €10,000.

Safety improvement works will take place on roads in Broadford, Castlemahon, Granagh and Kilcolman at a cost of approximately €75,000.

Meanwhile in the city, a €500,000 investment to the Coonagh/Knockalisheen distributor road will allow the first blocks to be laid on the road, which will finally open Moyross up to the rest of the northside. €150,000 is to be put in place for the proposed footbridge linking Arthur’s Quay and King John’s Castle.

And the wishes of residents in Corbally to solve traffic issues at the Park Bridge has been addressed, with €35,000 in place for traffic controls and improvement works.

It comes after residents and local councillors staunchly opposed a plan to make the bridge one way only.