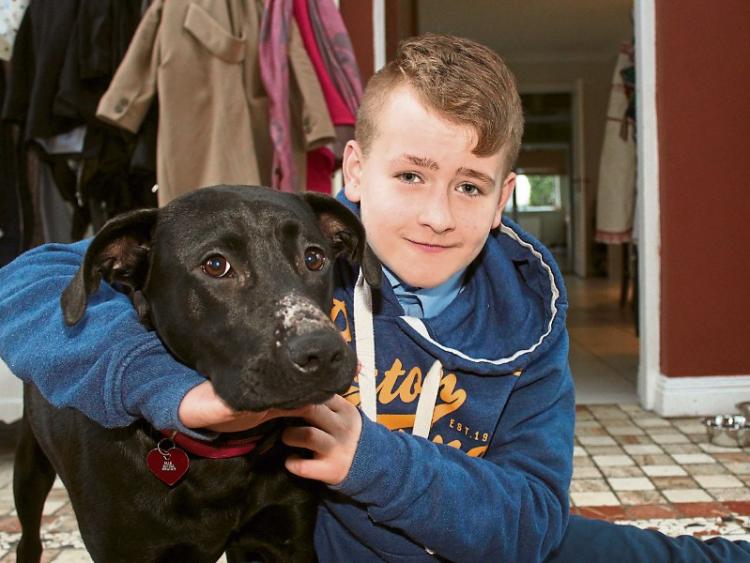 Kevin Rea with the family's beloved dog Billie, who is now on the mend after being attacked in the Rhebogue area last week

MYSTERY surrounds an attack on a dog in its own enclosure in the suburbs last week – but a vet has surmised that it could have been attacked by a badger!

Marie Rea, who lives close to canal in Rhebogue, said her family were mystified as to how their beloved labrador Billie, who is less than a year old, sustained her injuries.

A vet suggested to the owner that perhaps it was attacked by a badger and speculated that there have been several incidents of such attacks by badgers in the area. With cuts and scabs on its nose, Billie was prescribed a course of antibiotics.

The vet could not be contacted at the time of going to press. However, another vet in the city told the Leader that in general it’s a case of “dog bites dog, and cat attacks cat” and attacks by badgers are rare.

Local nature and wildlife enthusiast Albert Nolan said wild animals such as badgers generally back off, unless they are threatened and backed into a corner, though he noted that they are “generally gentle creatures, who live in family clans. Badgers generally are fearful of dogs, but the canal along UL is a green corridor for wild creatures. Some people are feeding badgers which is encouraging them to come into the city environment.  They are also being persecuted in the wider countryside, so their natural habitat is being lost and they are being forced to come into the city.”

The good news is that Billie is making a good recovery!