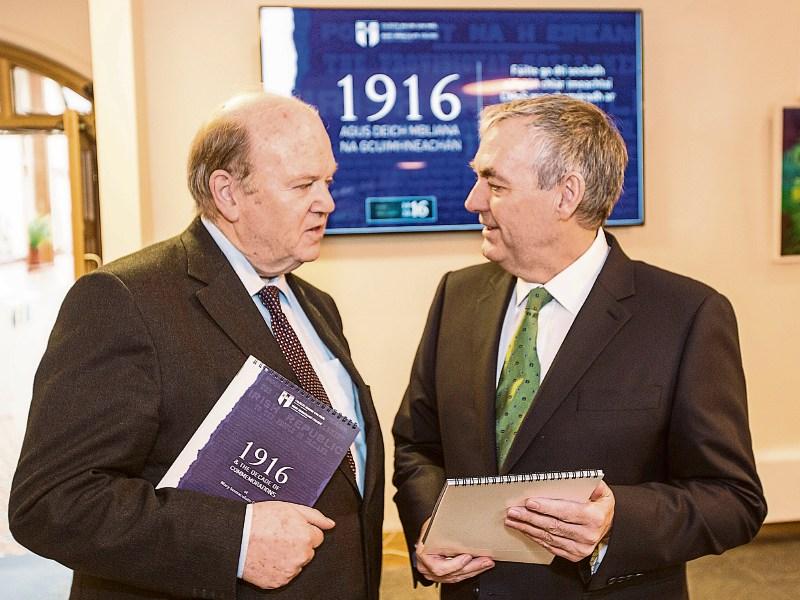 Finance minister Michael Noonan with MIC President Michael A Hayes at the recent launch of the college's Programme to Commemorate 1916 Picture: Liam Burke/Press 22

MORE than 30 commemorative events will take place at Mary Immaculate College of Education (MIC) to commemorate 1916.

Speaking at the launch of the programme recently, Minister for Finance Michael Noonan said he expects that the people of Limerick “and indeed the entire Mid-West region will attend the commemorative events in large numbers and I wish the college well for 2016”.

These events will range from educational conferences to exhibitions and from public lectures to theatrical productions in the Lime Tree Theatre.

Highlights include a 1916-style classroom reconstruction illustrating aspects of the life of a child at school in 1916; a conference entitled Memory and Vision which will compare Irish social and educational policy and practice in 1916 with policy and practice during the subsequent century; the Abbey Theatre’s new production of The Plough and the Stars, set amid the tumult of the Easter Rising; and The Illusion of Consensus — Photographs of Limerick in 1916, an exhibition featuring the multiplicity of life in Limerick in a time of transition and chaos with a focus on in the exceptional year of 1916.

Michael A Hayes, president of MIC, said the college will “reach out to the community, our students and our alumni and ask them to share in our celebration of Ireland’s independence”.

Mr Noonan said that the sensitivities of Ms Humphries’ Presbyterian co-religionists in the border counties would be acknowledged.

“The commemorations should help bring people closer together,” he said. “We must be cognisent of the past and that is the way Ireland will go forward. I am delighted the commemorations have got off to a good start.”

Programme details can be viewed at www.mic.ul.ie.