Cash injection for Ballyhoura to boost provision of facilities 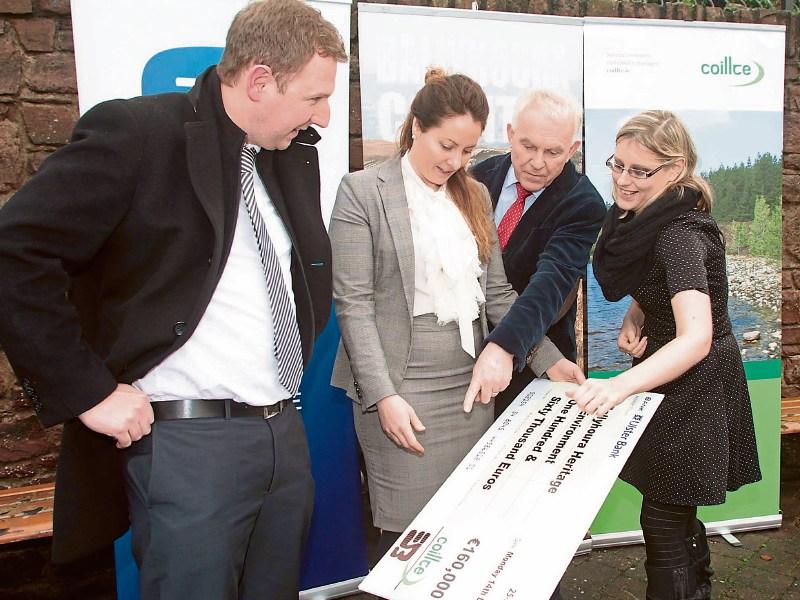 BALLYHOURA Heritage and Environment has been presented with a cheque of €160,000 which will go towards improving facilities in the area.

The cheque was presented to John Kennedy, chairperson of Ballyhoura Heritage and Environment from Nicola Wall on behalf of Coillte, and Liam Murphy on behalf of ESB. This funding was donated by ESB and Coillte, a joint venture and which arose from the Castlepook Wind Farm Development.

The gesture to Ballyhoura Heritage and Environment was a result of the loss of part of the trails at Canon Sheehan Loop, a popular walking and cycle trail in Ballyhoura.

As a result of the construction of Castlepook Wind Farm, alternative bike trails were constructed in early 2014 and this was part funded by the project, providing an alternative to the Castlepook loop bike trails. These additional trails, which are approximately 3.8 km in length, will remain following completion of the wind farm, providing a significant permanent enhancement of the trail system.

The Ballyhoura Mountain Bike Trails, which are free to use, feature over 100km of cross-country single track trails, and is regarded as the finest mountain bike trail network of its kind in Europe.

The Ballyhouras have become a focus for various recreation activities in recent years, notably due to the development of the bike trails.

A number of exciting events transpired this year and Ballyhoura are delighted at the attendance generated by each one.