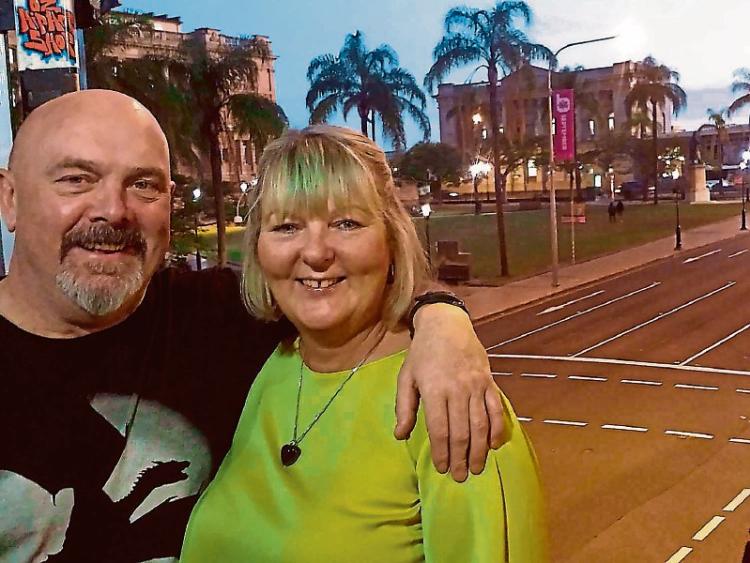 Janet and Eugene Bennis enjoying the good life in Australia, which they hope will continue

A LIMERICK grandfather who emigrated to Australia with his wife to spend the rest of their lives with their children and grandchildren may have to come home due to issues with his visa.

Eugene Bennis, 59, and his wife Janet, 54, from Granville Park in the city, sold their home in Limerick and moved permanently to Brisbane last February, where their four grown-up children and four young grandchildren are all based.

However, after adjusting to life Down Under, Janet said they have now “hit another hurdle on our journey” due to immigration issues. Eugene has been told he will have to leave by February 14 – this Valentine’s day – when his visitor’s visa expires, while Janet's application for a three-month extension to her temporary visa was successful.

“When we decided to emigrate, we knew it would take up to two years for our permanent residency or longer. We knew we could only stay 12 months at any given time until the visas were granted.

“I have a path worn into immigration, and each time I get told something different. Last week I was told apply for an extension on current visa, which I did, at the cost of over a grand,” she explained.

Janet said while she received a call allowing her to stay in the country, her husband Eugene has been told he has to go and they do not know for how long he will have to leave.

Janet, who was in tears after hearing the news, said that they feel in hindsight that perhaps they should have stayed in Ireland until their visas were granted.

“We have had a fantastic 12 months here surrounded by all our family. What annoys me more than anything is that we came as a package –  husband and wife, mum and dad. Why on earth would they let one stay without the other?”

The couple have spent all their savings in relocating to Australia, and are anxiously waiting for their permanent residency applications to be granted - having applied nearly two years ago when they first decided to emigrate. She said they could have waited but didn’t want to miss out on being with family any longer.

The couple have been inundated with messages of support on Facebook. She said one of the joys about being in Australia was being there to witness her grand-daughter Saoirse cycle her bike for the first time without stabilisers.