Water charges set to be an election issue in Limerick 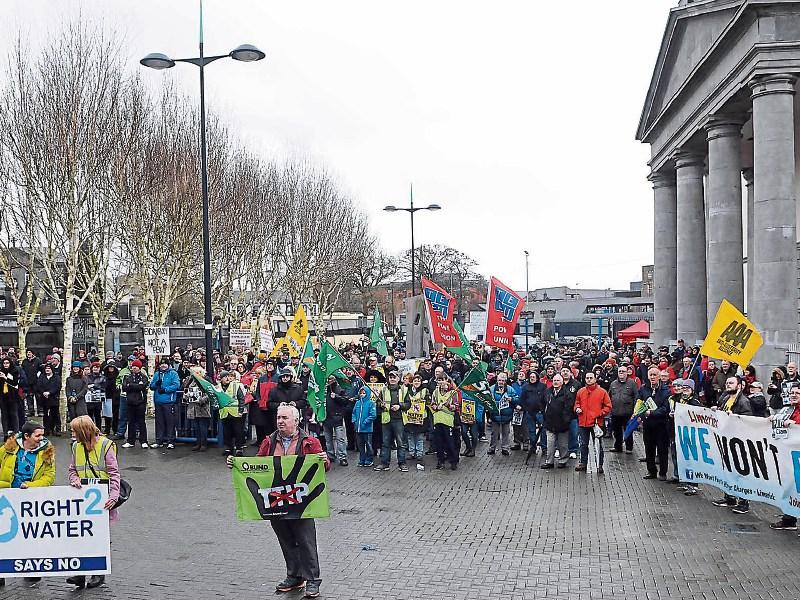 THE organisers of the Right2Water protest which was held at the weekend are urging people from across Limerick to attend a national demonstration ahead of the upcoming General Election.

Despite cold and windy weather, around 400 people from across Limerick and Clare took part in Saturday afternoon’s protest march through the city centre.

“Irish Water is a monster which is out of control – even the political parties that think they can control it are now scared of what these people are doing,” he said adding that 25 years ago, this year, he and other members of the then Limerick Corporation voted out water taxes.

As the protest made its way through the city centre, there were chants of “Enda Kenny, not a penny” and “Jail the bankers not the people”.

“The water charges are abominable, the amount of money that is being wasted by our government is unacceptable, I feel so strongly about it I feel ill to be honest about it,” she said.

Ms Keogh, who has three grown-up children, warned she will not be opening her door to any election candidates unless they are against water charges. “It’s a disgrace, how dare they show their faces,” she said.

William O’Neill, 50, from Old Cork Road says he won’t be paying water charges. “I think it’s an unfair tax, water should be free – people are entitled to it and it’s being taken off us,” said the William who has three grown up children.

“It’s them (my children) I am thinking about, not me. Down the road they are going to have to pay for it and it’s going to get dearer,” he said.

The Right2Water campaign says a national demonstration will take place in Dublin on the Saturday before the General Election.